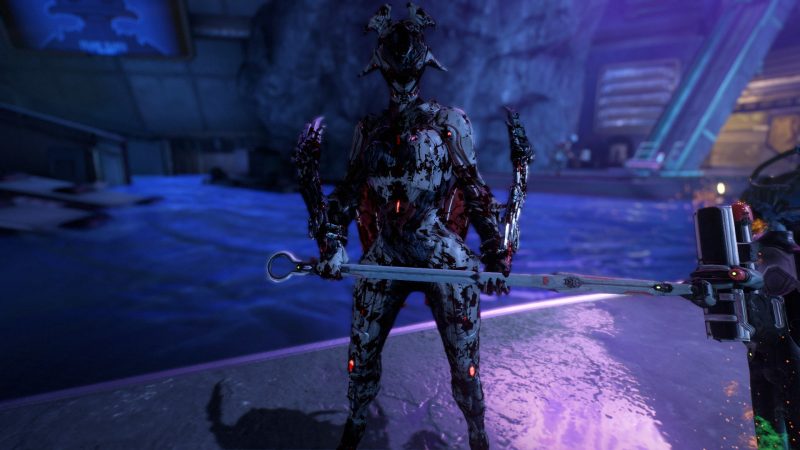 Garuda the blood queen Warframe, she siphons blood from her enemies and uses it to bolster her defenses, heal her allies, and drown her enemies in a torrent of steel and blood.

She is the hemomancer Warframe by manipulating blood that she siphons from her enemies, she can create a shield from the gore she rips out of her target that reduces damage while storing that damage and releasing it as blood bomb at her enemies.

Garuda can also impale her enemies with bone spikes draining their lifeforce slowly to heal herself and her allies or shoot a barrage of those spikes ripping them apart.

Garuda is a great Warframe for those that love violent and bloody gore so if you want Garuda as your next Warframe this is the guide for you.

If you want to know more about how to acutally pick mods for her, switch over to our Garuda Builds Guide.

How To Get Garuda Parts

Getting her parts is fairly easy with the right gear and a bit of patience, Getting her main blueprint is obtained through finishing the Vox Solaris Questline and her components as mission rewards from Orb Vallis Bounties.

Garuda’s components can be obtained by chance through these stages as rewards for accomplishing the mission stage of the bounty, although these missions may be challenging for the unprepared.

Best Warframes for the Bounties

The Bounties are challenging especially while on solo missions but there is a couple of gear you would want to have or specific Warframes to make sure that you can get through them with easily.

Focus on using Warframes that have great clearing or crowd control abilities that are set up for survivability because when you get 3 to 5 ranks in the wanted level of the taxmen you can easily be overwhelmed by their sheer numbers.

You do not need a lot of the gems to craft the required components which makes crafting garuda not a difficult task and a good thing about these gems is unlike other resources it be can be traded with another tenno making acquiring them much easier.

While you would still need Kuva to complete the build you would just want to either obtain it from the Kuva Fortress to farm, another source would be the Nightwave Reward table or Arbitrations Reward Table.

Garuda’s parts need mostly gems, they are mined on blue or red colored cracks on the rocks of the Orb Vallis by using a mining tool you can extract them, then process them in your Foundry to provide you with the gems required.

These gems can be traded with other players only after crafting them.

These gems will need some other materials to craft their final form. These cannot be traded and only mined on the surface of Orb Vallis.

You would require a couple of each type of Toroid to complete the materials needed for the crafting of Garuda’s components.

Since Toroids are only dropped on Fortuna, you might want to give our Fortuna Farming Guide a read!

You would need to go to the Enrichment Labs in Orv Vallis to obtain these by reaching Alert 4 and killing the incoming enemies they will randomly drop from them.

Another way would be lucky when you explore the caves they will be on the ground as an item that can be picked up like an Ayatan.

These can also be found in caves if your lucky but the best way would be to farm them at the Space Port from enemies by increasing the Alert Level to max levels then multiple enemies will be spawning that each has a chance to drop this item.

Or dropped by any Mite Raknoid you will encounter.

These will drop at max alert level in the Temple of Profit from any of the incoming enemies that will spawn also you can check some of the caves nearby for these items that can be picked up.

Another way would be hunting down Kyta Raknoids since they specifically have a chance to drop these.

Getting the parts can be challenging and comes with a lot of farming but Garuda is certainly worth it to have in your arsenal of Warframes.

She will rain a shower of blood on the battlefield to drown those that stand in her way.

Garuda is a good option for players with reckless abandon, that like to go in and hard in fights without the worry of death as she bathes in the blood of her enemies.