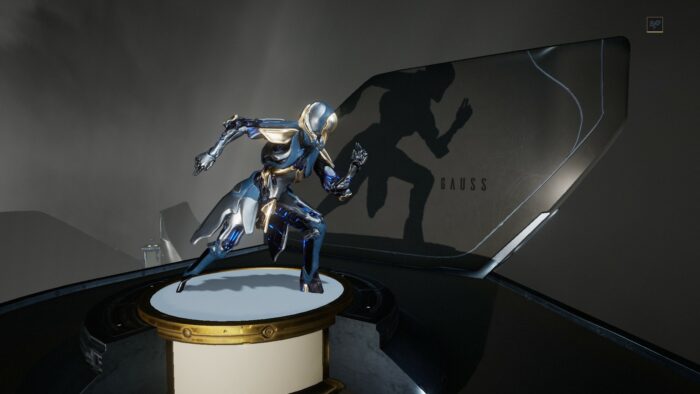 With the release of ‘Saint of Altra’ (Update 25.7) players also gained access to Gauss, the fastest Warframe in the game. He was named after the Carl Friedrich Gauss, a German mathematician with great reputation.

Design-wise Gauss looks more of a race car in Warframe dress, having the ‘Redline’ ability and using kinetic energy to damage enemies. He also gains bonus Shield recharge rate and if you equip his signature weapons (the Acceltra and the Akarius), you will get a faster reload speed with those weapons.

While getting his blueprints is fairly easy (even though you might have to grind a bit), crafting Gauss can be a little bit more troublesome, especially for newer players.

The resource costs are unique and not everyone already has everything needed.

If you’re asking yourself how you get your hands on Gauss and his blueprints and where exactly you’re going to find all the resources needed to craft him then keep on reading, because you found the right guide.

If you are looking for a guide on how to build Gauss, we do have the right article for you!

Let’s make this easy, because there isn’t really much to talk about: You can simply buy the main blueprint for Gauss from the market (30.000 Credits) and then start grinding for the other three blueprints.

For that you need to get to the Disruption node Kelpie (Sedna) and hope to get lucky with the rewards from the C Tier.

If you never heard of Disruption or if you are looking for some tips and tricks on the game mode, head over to our Disruption Mode Guide and read through that!

The drop chances are okay, especially if you keep in mind that the Tier C rewards in Disruption don’t follow the typical AABC drop rotation.

Instead you do have a chance for a Tier C reward every round after the first two – so if you’re super lucky you only need five rounds of Disruption and you’re good to craft Gauss.

If you’re not that lucky, you’ll usually need around ~20 rounds to get all three blueprints, but each round only is a few minutes if you’re going in with a four-man-team.

Here are the drop chances:

The manufacturing requirements of Gauss and his blueprints are somewhat expensive and especially the different processed ores could be harder to get.

You not only need to mine on the Plains of Eidolon and on Orb Vallis, but you also need to have a high enough rank (and some standing) to purchase the different blueprints from the mining vendors on Cetus and Fortuna.

Here is what you’re going to need if you want to fully craft Gauss:

While some resources from the Plains of Eidolon are easy to get, especially the rare ores can be somewhat annoying to farm.

Just keep on running from one cave to another until you have everything you need. You could also look at the inventory of ‘Old Man Sumbaat’ on Cetus and buy the daily special. He is also the character that will sell you all the ore blueprints.

Here is where you’ll get all the resources:

Getting everything from Fortuna and Orb Vallis for Gauss is a little bit easier in comparison to the resources from Plains of Eidolon and Cetus – but not by a lot.

Get your ore crafting blueprints from Smokefinger on Fortuna. Here is what you need and where you get it:

Other resources for Gauss

Getting the rest should be fairly easy, especially if you already have made your way through the star chart.

Here are the resources you’ll find on the different non-open world missions:

While it is fairly easy (and not super time consuming) to get your hands on all the blueprints needed to craft Gauss, you might have to do some grinding to get all the resources you’ll going to apply in your foundry.

If you’re currently not at a high enough rank in Fortuna or the Plains of Eidolon to buy all the ore blueprints, ignore Gauss for now and revisit him once you get there.

If you do however have all the resources needed: Enjoy crafting and playing with the fastest Warframe in the game!

If we missed some important information or if you simply want to ask a question, don’t hesitate to leave us a comment.

1 thought on “How To Get Gauss Guide”