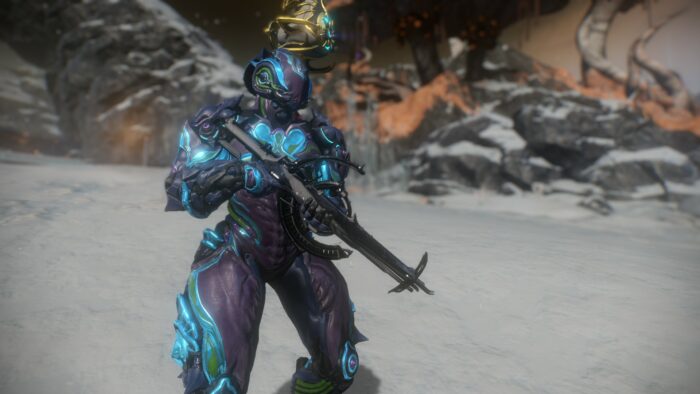 Hildryn is the second Warframe obtainable via the big Fortuna world on Venus and features a set of unique abilities as well as a high tanking capability.

She is also unique, because she is the first Warframe you couldn’t instantly farm at her release.

Instead you were only able to buy her blueprint, while the blueprints for her parts were locked behind a fight that wasn’t implemented (or at least available) during her release.

But now you can finally grind through the different missions and get your hand on Hildryn. To do so you must not only do some very long grinding, but also get through the newest boss fight and beat the Exploiter Orb.

Don’t worry if you have no idea on how to do any of this, because this is exactly the reason why this guide exists!

If you are looking for Hildryn builds, you might enjoy our ideas on that.

Getting the blueprints isn’t super hard, but requires you to grind a lot of standings and kill the Exploiter Orb over and over.

Especially getting your hands on the Hildryn blueprint can be super tiresome, because first you need to get the highest rank with the Solaris United Syndicate (check out our guide on that if you need some tips on farming standing).

After that you need to get your standing with the Vox Solaris Syndicate up to the highest rank (we do have a guide for that as well!) and then you need to farm an extra 5.000 standing to purchase the blueprint from Little Duck.

The Hildryn parts blueprints drop from fighting (and killing) the Exploiter Orb on Orb Vallis, so get ready for that.

You do have to start with Thermia Fracture farming first (yup, check out our guide) and then you can start fighting against the newest boss of Fortuna.

If you don’t know how to beat him, don’t worry, because (and you might have guessed it by now) have a Exploiter Orb Fight Guide ready to go!

There is a guaranteed blueprint drop per fight, with the following drop chances:

In order to get all three blueprints you probably need around six to eight runs, sometimes less (if you are lucky) or more (if you are unlucky).

Since the Exploiter Orb has a lot of different drops (including a guaranteed Lazulite Toroid, which can be traded in for 12.000 standing points with Vox Solaris), farming him over and over can be very beneficial, even if you already have every Hildryn part you need.

That is an excellent question and again, we are here to help. Crafting your Hildryn will require some amount of older resources (which are easy to obtain) as well as some rare resources and even new stuff you can only find on the Orb Vallis.

Here is everything you need in order to finish your Hildryn in the foundry:

As you can see, getting all the rewards (especially if you are a newish player) can lead to a lot of farming and grinding.

But don’t get frustrated, because building Hildryn is totally worth it!

Farming Hildryn requires a lot of patients and knowledge and to be fair, a lot of players don’t like the way Digital Extremes hides new content behind long hours of grinding.

Especially getting through all the Fortuna standing can be very boring and disappointing for new players. But if you finally manage to get your ranks to the highest level, you will be able to get your hands on Hildryn without spending any Platinum.

And Hildryn is a really neat, strong Warframe with a very unique skill set. So don’t get frustrated, keep playing and reward yourself!

If you think we missed any important information or if you have any tips to share, feel free to leave us a comment.