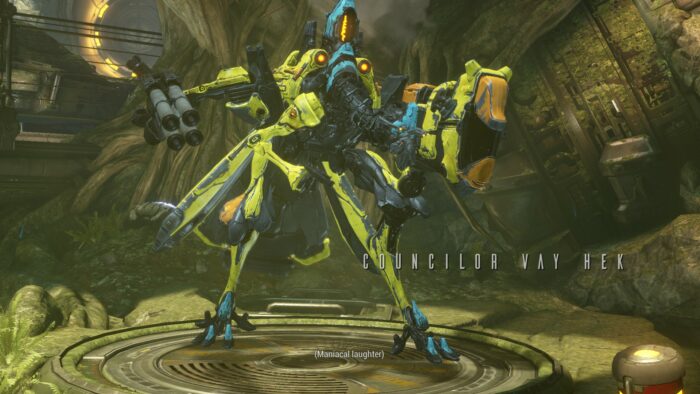 Even though Earth is the first planet in the progression of playing Warframe and therefor Councilor Vay Hek is for most people the first boss encounter they could potentially finish, Earth’s assassination target is fairly hard to beat during the first few hours of the game.

Oro has a level of 20 to 25, while the rest of Earth is actually under level 10, so as a new player you won’t really be able to beat the flying administrator (you also have to be Mastery Rank 5!) and have to revisit him at a later point.

That also means that you won’t be able to get your hands on Hydroid early on, because Councilor Vay Hek drops all the blueprints needed to craft the water-based Warframe.

He also has a few different, viable builds that are super fun to play and can be used in different environments.

If you are looking for some ideas and suggestions on how to mod your Hydroid, we recommend reading through our Hydroid Builds Guide.

Before you can build yourself a Hydroid you need to get your hands on all the Hydroid’s blueprints.

You can simply buy the main blueprint for 50.000 Credits in the market, but you will need to gear up and fight the assassination target on Oro (Earth) for the other blueprints.

The boss mechanics are fairly easy to understand, even though it can be fairly tricky to actually damage him in the early stages. But let’s start with the fight first:

Once you’ve joined the mission you need to start following the yellow quest marker until you meet Vay Hek somewhere on the map.

This isn’t the actual boss fight, but it will eventually lead to it. For now you have to fight him by waiting until he removes his mask (he is invulnerable until then) and the big spike on his back starts glowing.

Now you can either shoot the glowing part on his back or aim for his red face. If you deal enough damage he will fly away, otherwise he puts his mask on and keeps attacking you.

Just be patient, kill enemies around you and wait for Councilor Vay Hek to remove his mask again.

You need to repeat this phase three times while following the quest marker.

Once you’ve reached the final arena by sliding down a pipe you have to first fight the boss as you did before: Dodge his attacks, wait patiently for him to remove his mask and then attack him.

After you’ve dealt enough damage he will finally become serious, call for his Terra Frame and the final phase starts.

Vay Hek and his Terra Frame certainly look strong, but in the end the boss fight is super easy. Make sure to bring a weapon with enough long range so you can hit the Terra Frame if it flies around, otherwise just go full attack mode.

Once you’ve killed the Terra Frame, the boss will fly away, leaving his loot behind.

Head to the exit and you’ll get a Hydroid part blueprint after the mission ended.

We highly recommend to bring your best Tankframe, with Rhino being a great choice against the boss and his magnetic damage output.

More important however is your weapon and we really recommend picking up something with area-of-effect damage.

You could for example pick a shotgun with a good spread, but you also can pick one of these:

What do those weapons have in common? Well, they all have (small) area-of-effect damage, which makes it way easier to hit the boss and damage his face or back.

If you pick a rifle, sniper or even a shotgun with a small spread you probably will have some trouble hitting the boss while he is either chasing you or flying around.

So picking AoE-damage weapons will allow you to run around, dodging attacks and still deals some damage while shooting in the general direction of the boss.

In the end, pick whatever you have available and feel comfortable with.

Once you’ve farmed all three blueprints from Vay Hek and bought the main blueprint from the market you need to start farming all the resources needed.

Even though Hydroid can be farmed on the first planet of the Star Chart you’re going to have to farm basically the whole system (or at least get to the Void system) before you can actually craft the Warframe.

Here is what you need to look for:

The common resources are fairly easy to get, starting with Alloy Plate (Venus, Jupiter, Ceres, Phobos, Sedna and Pluto) and Nano Spores (Neptune, Saturn, Eris and on the Orokin Derelict).

The uncommon resources are also not hidden behind a lot of content and you can easily get your hands on enough Rubedo (Earth, Europa, Sedna, Phobos, Pluto and Orokin Void) and Polymer Bundle (Venus, Mercury and Uranus) by either running through a few different missions or bringing a dedicated farming Warframe like Khora or Nekros.

The rare resources however are a bit tougher to find:

From now on it’s only 72 hours and you’ve finally can get the water based Warframe for your missions.

Even though in theory you get access to the Earth assassination once you’ve hit Mastery Rank 5 – which takes a few hours – you probably want to wait until you have a few better weapons and mods before you start farming for Hydroid.

You also need to make your way through the Star Chart and find the Void system before you can even craft the blueprints, so you don’t need to be hasty on that.

But once you’ve progressed enough through the maps, go ahead, get your hands on the Warframe and have fun releasing the Kraken!

If you think we’ve missed some important information or if you have something else to add, use the comment function and leave your thoughts!