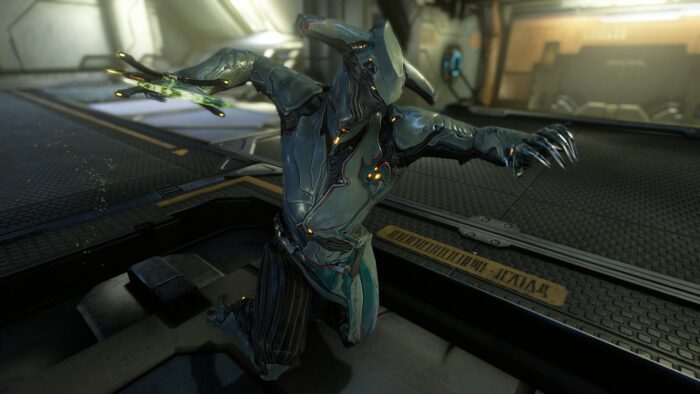 Loki is widely used for its stealth capabilities, he is considered one of the best candidate for missions that require tactical infiltration, as he is the original stealth Warframe.

He is also a stealthy trickster named after the Norse god of mischief.

He can make himself invisible and kill his enemies without drawing too much attention to himself and with his trickster nature, you can switch places with either friend or foe placing them in relative safety or in harm’s way, making them confused and vulnerable.

So, even if you find yourself or your squad surrounded by enemies, you can turn the situation around by disarming the enemies with an irradiating wave that both damages them and applies confusion.

That lets you and your squad go in with your melee weapons and have the upper hand against your enemies.

With those awesome abilities that can have different builds (check out our Loki Builds Guide) and tricks depending on your playstyle, you can obtain this deadly stealth Warframe after unlocking Neptune and this guide will put you on the right track on how to get it.

How & Where To Get Loki Blueprints

Loki’s main blueprint can be easily bought in the in-game market in the orbiter for 35,000 credits.

The 3 blueprints that are required for Loki would be his Neauroptics, Systems, and Chassis that can be obtained through an assasination mission in Neptune.

Once you have all 3 you would need to build them first before proceeding to finally building the Loki Warframe.

This is a list of which planets hold the resources needed for crafting your Loki, you can either do missions on the nodes of the planet or use an Extractor on the planet to maximize your chances to get the resources you need.

Where To Farm Loki (Tips and Tricks)

Here are some tips that might help you in your process of farming.

If you want to be productive, you can first farm in Sedna, a dwarf planet in which you can find two common (Alloy Plate and Salvage) and one uncommon (Rebedo) resources.

Then you can proceed to Phobos, a moon of Mars in which all the uncommon (Rubedo and Plastids) and one rare (Morphics) can be found.

The rest of the resources, Polymer Bundles (common) and Neural Sensors (rare) are separated in different planets but the Control Module (Rare) resource can be found in Neptune where you can farm for the 3 blueprints that you need for Loki.

You can do these tips or If you have an extractor then it will be easier to gather and less time consuming to farm the necessary resources.

The better your extractor is, the higher chances you can get the resources you need.

You should also head over to our Resource Farming Guide and read through some general ideas!

You would need to unlock Neptune to get the other three remaining blueprints by defeating the hyena pack on the Psamathe mission.

Here are the chances that you will get the parts after completing the mission:

The Hyena pack is a pack of quadrupedal robots that hunts and kills their prey and they consist of 4 types of Hyenas with different colors and abilities each brandishing a mounted plasma repeater that inflicts their innate elemental or physical attributes.

Aside from the plasma repeaters, each Hyena is also equipped with a special ability that is unique to each Hyena.

Fighting them alone will be a bit difficult as you will be giving them a chance to swarm you but doing so, you need to immediately take one of them one by one.

The ideal way is to destroy Hyena PB (Lead) as the Hyena creates a shield on his pack, giving them a defense boost and Hyena Th (Thorium) as the Hyena charges at you and disrupts your shield, leaving you vulnerable to the pack.

Destroying them after will be easy enough for you to destroy the rest of the Hyena. Just make sure you keep your distance as they will not hesitate to use this opportunity to turn the tables around.

Here are the best possible physical and elemental types to use against the Hyena Pack.

It would be best to use weapons that have innate magnetic damage like a Kuva Weapons with an innate magnetic element or the Amprex to make the Hyena Pack encounter trivial.

Best Warframes against the Hyena Pack

After discussing the enemies, their abilities and best types to use against them, let’s go for the Warframe next.

Since using the most effective Warframe can increase your chance of survivability and helps you complete your mission faster.

Farming the Hyena Pack is not that hard when you get used to their tactics, and with the right equipment at your disposal, it gets easier as you gain the parts you need to build Loki.

It’s worth it to have Loki in your arsenal especially in higher level missions like Sortie spy missions where it only takes one failure of being caught will end the mission immediately.

On a side note, Loki can be used to farm Cephalon Simaris standing by scanning unalerted enemies in high-level missions for huge points in standing.

With that said, having this Warframe in your arsenal can be an advantage on missions which can be a good change or addition to your playstyle by using the Loki Warframe