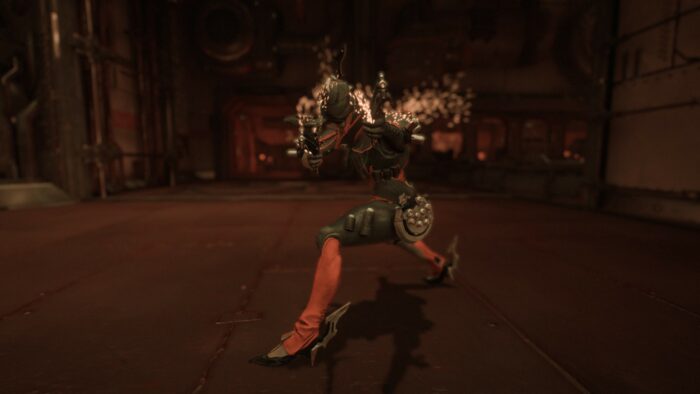 If you are looking for one of the strongest DPS Warframes in the game right now, you will eventually hear the name ‘Mesa’.

She does not only have an in-build aimbot, she is also able to quickly burst down enemies of every level and will even deal with most of the assassination targets.

A lot of players argue that she is probably the best DPS Warframe in the game (or at least in the top three) and no matter how strong you think she is, she will definitely help you out throughout the whole game.

So getting her as early as possible will be a good idea.

That said, getting her early on isn’t really possible. Even though her Warframe parts blueprints do drop from an assassination target (Mutalist Alad V on Eris), getting to Eris isn’t easy for newer players.

And once you’ve made your way to Eris you still can’t just head into the assassination mission. So getting your hands on Mesa isn’t easy at all for newer players, but the grind will be worth it.

If you’re looking for some ideas on how to build the gun-slinging Warframe, head over to our Mesa Builds Guide.

Before you can actually start fighting Mutalist Alad V for Mesa’s blueprints you need to start crafting keys for the mission, which requires you to get some more rare resources.

You also need to finish the quest line ‘Patient Zero‘ to get the blueprint for the key. So you really should start with that before grinding for the resources needed.

Here is what you need once you’ve managed to finish the quest line:

While most of these resources shouldn’t be hard to get you will need to really farm for the Mutalist Alad V Nav Coordinates.

You can either get them from higher level Invasion missions or by grinding through endless Orokin Derelict missions – namely Defense and Survival.

There is also a 4,51% chance that you will get once of these if you’re opening all three containers in the Hive Sabotage mission (Naeglar, Eris).

But your best bet is doing 15 or 30 waves of Orokin Derelict Defense (you want to get the B-rotation) and repeating that until you have enough to craft multiple keys.

Don’t forget that not everyone in your group need to have a key. If you join a four-man-group with one key each you can fight Mutalist Alad V four times.

So use the recruitment chat and try to find a dedicated group!

How To Kill Mutalist Alad V

Once you’ve acquired a few keys, you should head to ‘Mutalist Alad V Assassinate‘ on Eris and start your first fight against the boss enemy.

If you’re with a group, only one key needs to be used (so if each team member in a four-man-team has a key, you can do four runs!), which makes the farming aspect easier if you do have a dedicated team.

Once you’re inside the mission, ignore all enemies and rush to the yellow mission marker, wait for the short cut scene to finish (or skip it) and then start the boss fight.

Here is everything you need to know about fighting Mutalist Alad V:

That is basically the whole fight. Wait until he removes the collar, damage him – and repeat. Use the downtime between collar removals to kill random Infested mobs and you’re good to go.

Maybe more, maybe less, depending on your own luck.

The Best Equipment for the Fight

While in theory every weapon with a decent Corrosive proc chance is a great way to combat Mutalist Alad V, we really recommend bringing either a good bow (Zhuge Prime or Cernos Prime are good examples) or your best sniper weapon (e.g. Rubico Prime or Vectis Prime).

Shotguns are in theory good as well, but you have to be close enough and hit the Corrosive proc to be useful. We don’t recommend using rifles or similar weapons, because there is only a small window in which you can actually damage the boss.

Of course there are a few good Warframes that will make the fight super easy.

Here are our picks:

Again, don’t forget that the boss might start mind controlling you if you’re playing with a group. Or they will mind control an ally.

So make sure to have a good timing in hitting the infested Alad V or your team mates might start killing you.

Once you’ve got your hands on all the component blueprints, buy Mesa’s main blueprint from the market for 30.000 Credits and start gathering all the resources needed to craft the gun-slinging Warframe. Here is what you need:

All the common and uncommon resources should be fairly easy to farm and usually (unless you are very new to the game) you should have more than enough in your inventory.

If not, here is where you get everything:

The rare resources might be a little bit harder to farm, but also shouldn’t present a big problem:

Once you’ve managed to get your hands on all the resources needed, start crafting and enjoy the wait time until your own Mesa is finally finished.

Even though Mesa is a really great Warframe to have and is just a great pick during the early game, the mid game or as an endgame DPS, getting her early on might be problematic for a lot of players.

You simply need to grind a lot of keys to fight the boss, which might be off-putting for most players. But if you get your hands on her early, she will quickly become your go-to Warframe for a lot of content.

In the end you are free to pick her up whenever you want, but we recommend doing it as early as you can.

If you think we’ve missed some important information or if you simply want to add your own ideas, feel free to leave us a comment!