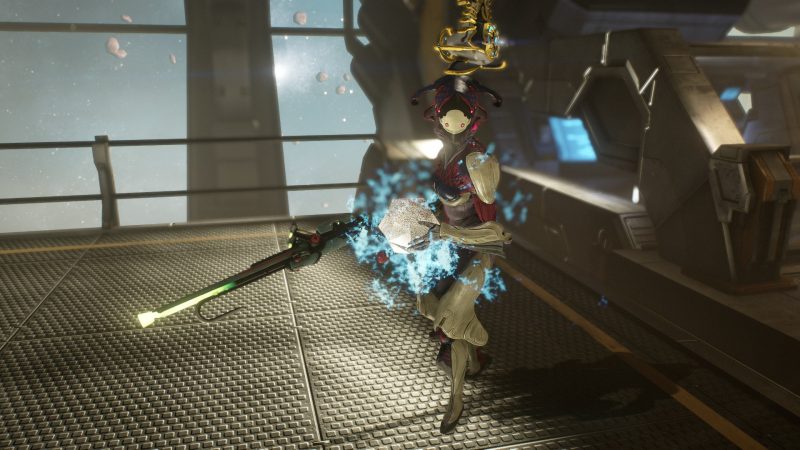 Mirage is a mysterious and mischievous Warframe, she is known for her ability to make multiple copies of herself that deals deadly damage against her foes.

Not only that, with her tricks up her sleeves, she can also use explosives and lights that can make her foes blinded and confused.

She is capable of using the light and dark areas as her stage, performing her abilities on the battlefield and tricking on her enemies.

This caster Warframe can be obtained through her lore quest, the Hidden Messages quest and its main blueprint can be bought in the market after obtaining all of her components.

Excited to get her Warframe and know her story? If so, this guide will help you decipher the riddles and let you discover the memories of Mirage’s valiant story.

If you’re looking for some information on how to build the Warframe, click here for our guide on that!

How To Get Mirage Parts (Blueprints)

You can obtain all Mirage’s components on the Hidden Messages quest but before you can start, you must complete the Pluto/Sedna Junction.

Once completed, the Hidden Messages quest will automatically be available from your Quests section via Codex.

Note: Do not sell your Mirage Warframe as you can only do this quest once. The only way to obtain the Mirage again is through the Market using Platinum.

Best Warframes For The Questline

The Hidden Messages mission lets you discover the memories of Mirage while letting you acquire the components of Mirage upon completion and unlocking the main blueprint in the market in the end.

All of the mission requires you to run and kill infested enemies in the Infested Ship tileset.

They are basically weak against slash, heat, gas, corrosive, and blast attacks, so any weapons with those or Warframes that have AoE abilities will do the trick.

Mirage Farm (Where To Farm)

Since you need to craft the necessary components to move the story forward on the Hidden Messages quest, here is the list of the resources and where to find them, in addition to the main blueprint to finally complete your Warframe.

This is a list of which planets hold the resources needed for crafting your Mirage, you can either do missions or use an Extractor on the earth to maximize your chances to get the resources you would need.

Argon Crystal (Rare) – this resource can be farmed in the Orokin Void Tileset and a few assassination targets.

Do note this resource will degrade and disappear in your inventory after 24 hours, so hoarding is not an option. It is best to acquire this item when you need to use it immediately.

A master trickster and illusionist, Mirage may be durable but she can be tough in the darkness and deadly in the light.

She can lay traps and shoot layers, blinding the nearby enemies. Her Halls of Mirror ability can produce copies of herself, confusing the enemies also making her deal a lot of DPS against them.

Mastering Mirage is well worth it due to her abilities, she can be good for both solo and team missions depending on your play style, and with proper modding, she can get more powerful.

4 thoughts on “How To Get Mirage Guide”