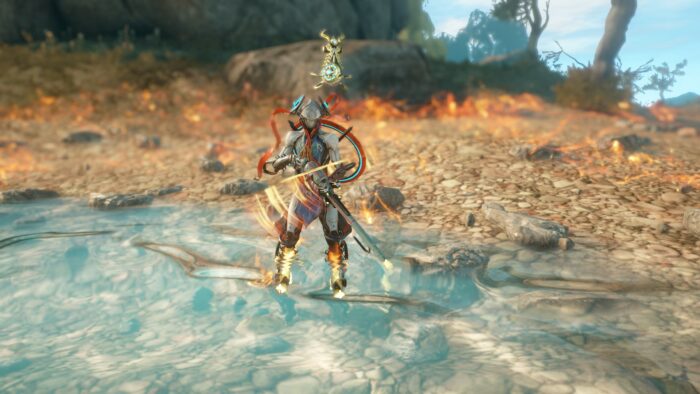 Nezha is a tanky Waframe with great mobility that can swiftly move across the battlefield while leaving a trail of flames in his wake with his fire walker while protecting his allies with a protective halo or impaling his enemies with his divine spears.

He is a well-balanced Warframe that can multiple roles that focus on being a support tank or crowd control. Lucky enough that Nezha unlike other Warframes is much easier to acquire just by joining a clan or researching him on your own dojo.

How To Get Nezha’s Parts (Blueprints)

You would need to research Nezha in the Clan Dojo first (check out your Tenno Research Lab!) to be able to replicate his parts.

After completing this task and after providing the right materials you will just have to wait for some time before proceeding to research his three main components which are the Neuroptics, Systems, and Chassis.

After researching the parts in the clan dojo, the parts can be replicated any number of times by any member of the clan bear in mind that you will only be replicating the blueprints where they will still require to be crafted in your orbiter’s foundry.

There are 2 sets of materials needed for the build itself one is for the Clan Research and on for the Warframe itself.

With the Clan Research, you don’t have to do it alone any member of your clan can donate and add to the materials needed for the research of Nezha’s blueprints.

There are a couple of ways of obtaining the completed Detonite Injector, Mutagen Mass and Fieldron is by either getting them as rewards for invasion missions or getting as rewards on some of the bounties in Orb Vallis

This is fairly easy if you have the right team to farm these materials a combination of Nekros and Khora can get you these resources quickly.

Farming Argon crystals is fairly easy either within the void tile-set or by opening vaults in Deimos with the only unfortunate part is that they have a shelf life wherein they decay every 24 hours.

Here is the list of required resources to get Nezha.

Nezha is One of the Four Warframes that are available in the clan Dojo to be researched and obtained.

Nezha is quite the versatile Warframe that is available in the game he can be a tank with great crowd control or a nimble and fast assault Warframe that can perform equally to even buffed prime Warframes.