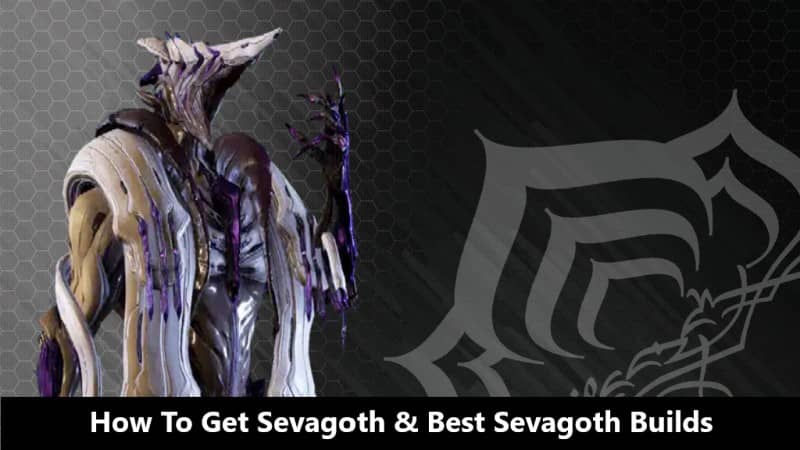 If you are an avid Warframe player, you might be wondering how to get Sevagoth and the best Sevagoth builds in the game.

Sevagoth is the specter of death. This Warframe is useful when fighting Tenno enemies, especially when made as fast as possible.

You need to finish the ‘Call of the Tempestarii’ story quest to unlock Sevagoth.

This story quest will bring up the ghost Railjack ship as well as Sevagoth.

It’s a fun and action-packed mission where you must deal with a Corpus captain called Vala Glarios.

Completion of this quest will get you the main Sevagoth blueprint plus the blueprint for the Epitaph which is his main weapon.

How to Farm and Craft Sevagoth Blueprints

Once you have the main blueprint after the quest, you can farm for the component blueprints.

You can only get these on Void Storms, or Void Fissures as they’re also know, in these areas:

This can be a long grind, since there is only a tiny 10% change of getting them. Once you have them, you can start crafting.

These are the requirements for the components:

You also need 25,000 credits, 72 hours and 3 Orokin Cells to craft the Sevagoth frame itself.

How to Get Epitaph

Sevagoth’s signature weapon is Epitaph and this is something you definitely want to have to enjoy the fullest experience from Sevagoth.

It’s a firearm that is wrist-mounted and shoots charged and uncharged shots. Charged shots have a high punch-through effect and critical chance.

Epitaph also has high impact and slash damage and is good for health and shields.

You must get the Epitaph blueprints on Void Storm missions, in particular these:

There is a 10% chance drop for all the blueprints – receiver, barrel and main. This means you will probably have to repeat the quests a number of times to get them all.

Once you have them all, you will need 7 Orokin Cells and 20,000 credits to create Epitaph. It also takes 12 hours to make.

What Abilities Does Sevagoth Have?

This makes his Shadow fly out and will ravage any enemy in Sevagoth’s path.

Death’s Harvest will cause damage to Survivors over time and the souls of the dead fill up the Death Well.

You can plant a dead seed in targets close by to drain their life force. You can reap what you sow to blow up affected enemies.

This deals some of their health radial damage.

If the Death Well gets to more than 75% full, you can release Sevagoth’s Shadow form which will use several melee-focused abilities to tear into the enemy.

This calls up a radial pulse wave to make catch and slow down enemies. Their life force is then siphoned to the Death Well.

Allies in the wave can steal health after each attack.

The Shadow resembles Chroma’s Efficy in a way but this one is more refined and was created by combining gameplay elements from other Warframes.

Shadow is a playable character rather than a sentry, changing the gameplay with his own approach to crowd control and melee combat.

It is also useful to attract enemies in a ways similar to Mag’s Pull with the Embrace ability.

Combine it with Consume (life stealing elements) to inflict damage and de-buffs.

Since you can assign mods to the exalted shadow and weapon, you should use a minimum of 2 Forma per setup to ensure you add the right mods.

Ability range is very important, considering the main idea is to fill the Death Well as quickly as you can, when Gloom and Sow can be used.

Consider Augur Reach or Overextended Stretch, as the further Sevagoth can reach the better.

Ability Strength is another important and you can combine any type of Intensify with Power Drift in the Exilus Slot and Augur Secrets.

Flow is helpful for preserving your energy. You can also add Streamline to enhance your ability efficiency.

Try Energy Siphon in the Aura slot to help you recover energy.

These are energy-heavy skills so use Flow to improve the amount of energy you keep, or the Prime version of Flow.

Fleeting Expertise and Streamline are good for efficient ability. If you still have a slot, Stretch can improve ability range.

The Shadow Claws boast high general critical chance as well as status chance so these stats should be made a priority.

True Steel can help you get to more than 100% critical chance. This means Organ Shatter and Berserker are great for damage as well as speed.

Any type of Pressure Point can inflict raw damage.

Drifting Contact and Conditional Overload are also helpful, along with any mixture of elemental mods.

Voltaic Strike or Virulent Scourge would get you a corrosive output along with a bonus for status chance.

Sevagoth used to be The Tempestarii captain. This Old War Railjack was famed for its rescue servings.

Sevagoth was lost to the Void one day but still commanded his Shadow to get The Tempestarii to look for his body, making it a ghost ship.

This ship was an enemy of Corpus Captain Vala Glarios, the only one to survive the ship’s attack on Lucretia Platform.

The Tenno and Cephalon Cy found Tempestarii in the Veil Proxima and posed as a ship in distress.

A corrupted navigation log is given to the Tenno by the Shadow. The try to repair it but Vala ambushes them.

The Tempestarii banishes Vala before jumping into the Void for the ship’s last rescue mission.

Sevagoth’s corpse is found by the Tenno in a lifepod so his Shadow and Sevagoth himself can be reunived.

The Tenno give him a ship burial when the launch his body into the Void.