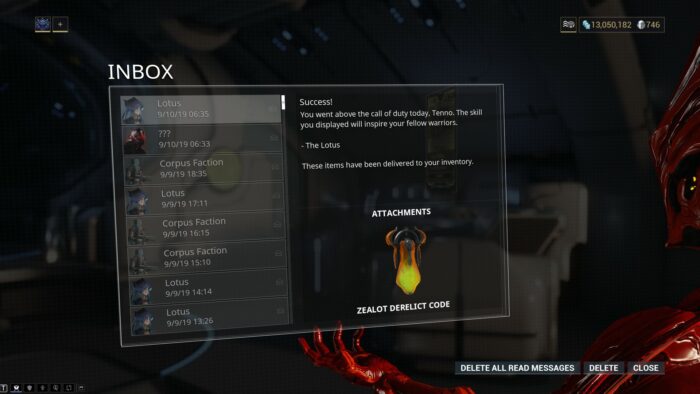 With the end of Nightwave Season 2 coming closer and closer every day, Digital Extremes not only increased the spawn chance of Zealot Heralds (the followers of Arlo).

They also increased the number of Zealots per spawn (instead of a Zealot Herald and a Zealot Proselytizer you have to fight against a Herald, a Proselytizer and a Baptizer), which will reward you with 200 points of Nightwave standing instead of 50 points.

They also added ‘Emissary Derelict missions’, which will reward you with 1.500 extra Nightwave standing. To join such a mission, you do need to get your hands on a Zealot Derelict Code first – which is fairly easy to get if you know where to look and what to do.

Luckily you’ve found this guide, because we are here to give you exactly the information you are looking for.

To get one Zealot Derelict Code you do need to finish an Infested Outbreak Invasion. To find those invasion missions, simply go to your star chart and you should see ‘Outbreak Missions Completed’ on the bottom right of your screen, right above the ‘Nightwave’ box.

This message will also mention two planets, so pick one of those planets and find a node that looks like a fist. Make sure it is actually an Infested Invasion and not a Grineer or Corpus one and then just finish the invasion by doing the same node three times.

To get the Invasion reward itself you need to wait until the Infested Outbreak Invasion is completely finished (which might take a few hours), but you’ll get the Zealot Derelict Code without waiting for that to happen.

Once you’ve completed three Infested Outbreak missions on a planet, you’ll get an ingame mail with one of these codes.

It is also important to note that sometimes there are multiple Infested Outbreak missions per planet and theoretically you can do three different missions to get one code – for example because a mission already vanished or because it switched from a fast mission type to something slow like Defense or Survival.

However, doing that will result in you not getting the Invasion reward, but only the Zealot Derelict Code.

Also, you can only get one code per planet.

So even though there might be multiple Infested Outbreak Invasions on a single planet, you won’t be able to get multiple codes – until it resets.

Once you’ve managed to farm one of the Zealot Derelict Codes, you can join the special Emissary Derelict mission, which can be found on each planet with an ongoing Infested Outbreak.

Just look at the planet and you’ll find the special node. Join it, simply do the mission and extract, which will reward you with 1.500 Nightwave standing as well as the usual rewards.

There is also a high chance for the Zealot group to spawn, so bring weapons that are able to kill them fast enough – otherwise they just start reviving themselves.

They also deal a good amount of damage, so try to dodge the attacks.

The new Zealot Derelict Codes and their respective missions are a great way to farm some extra Nightwave standing.

Even if you already reached rank 30 with Nightwave this season, you’ll get a lot of extra Emissary Creds with each rank you’ll gain past the 30th rank.

Use those on Orokin Catalysts, Orokin Reactors, Nitain Extract, on the alternate helmets or on whatever you need and want.

Infested Outbreak is also a great way to farm the Mutalist Alad V Nav Coordinates, which are needed to farm for Mesa and her blueprints.

So keep that in mind when choosing which Infested Outbreak Invasion to do.

As usual, feel free to leave us a comment with more information, questions or anything you want to add.