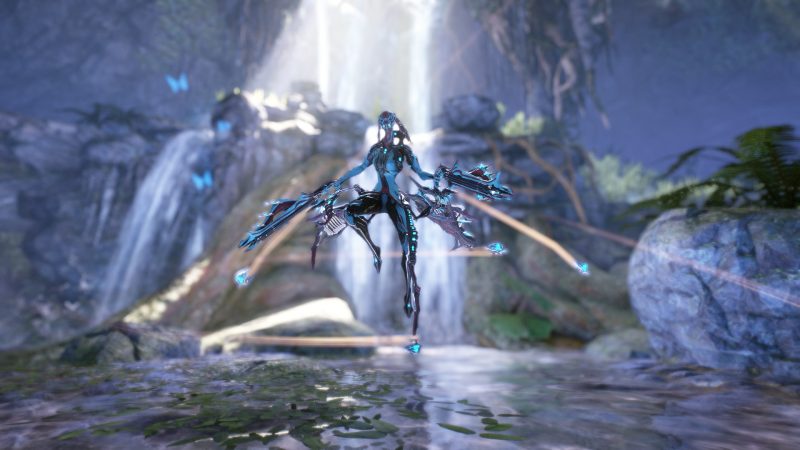 Titania is a deadly and mischievous fairy Warframe. Versatile and capable of crowd control, she can deal severe damage to a single enemy or even a mob of them.

She is Titania, the Queen of fairies. She can change her form and fly around the enemies while her Razorflies tear through enemies around her.

She can also suspend them mid-air and become a beaconing bomb, luring the enemies and letting them crowd around before they detonate on command.

With her on the team, she can extract random buffs from the enemies that you and your allies can take, which gives a significant advantage for survivability in most of the missions.

A majestic Warframe that you can obtain by doing the “The Silver Grove Quest,” which you can get from the New Loka leader on any relays, and this guide will help you on your journey to the sanctuary to discover more about Titania and her origin.

If you are looking for some ideas on how to build her, feel free to take a look at our Titania Builds Guide.

You can obtain both Titania’s main and component blueprints in this quest, but before you start, you must complete the main quest “The Second Dream” and must reach Master Rank 7 to unlock The Silver Grove Quest.

To get started on the quest, you must visit New Loka, which can be found in any relay. Then ask the leader Amaryn about “The Silver Grove.”

Amaryn will tell you about the Silver grove that is located in the purest location on Earth and that the Grineer seeks to defile it.

She will tell you next that the New Loka plans to awaken the ancient defenses that guard the place. After talking to Amaryn, the quest can now be activated by going to the Quest Menu on the Codex.

The quest has 3 phases to complete:

Once you start the quest, you will immediately receive a Nightfall Apothic blueprint and a voice imprint, which is a voice log from an unnamed female Orokin-era researcher.

So, after listening to the voice imprint, you need to use Codec or Synthesis Scanner to locate and scan various plants that will be required for crafting the Nightfall Apothic.

You can bring Helios or Helios Prime which has the Investigator mod. This allows Helios to scan enemies and objects within a certain radius.

This will also work on the plants required for the quest, allowing you to easily identify and collect them.

If you do so, remember to equip either the Codec or Synthesis Scanner or both, to be able to use scan charges that are needed for Helios to scan.

Equip the Apothic in your gear once you’ve finished crafting it. You are then tasked to visit E Prime on Earth and find a small shrine. You will be fighting Grineer patrols along the way, and with the help of Amaryn, it will be a bit easier to find the shrine’s location.

Then a voice will be heard around the shrine asking what you are doing. Amaryn believes that this is the Grove’s sacred voice. A Loki Knave Specter and its clones will suddenly appear and attack, which you must kill, so you can finish extracting to complete this phase.

You will then receive Titania Systems Blueprint and another Apothic blueprint for the next phase.

Equip the Twilight Apothic in your gear once you finished crafting. Again, you need to return to E Prime on Earth and go back to anoint the altar.

Then the same voice as before will speak again but telling you to get out.

A Saryn Orphid Specter will appear and attack, after defeating it, the voice will speak again and will mention Titania. Amaryn will start to doubt the sacred voice.

Upon completing, you will receive the Titania Chassis Blueprint and finally, the final Apothic blueprint.

You will receive your final Apothic blueprint and a voice imprint.

After hearing the last voice log from the female researcher, you need to locate and scan the required plants again for this final blueprint.

Amaryn will pull out of the mission after hearing the final voice imprint. However, Ordis will urge you to complete the mission.

After equipping the Sunrise Apothic, you will need to go back again to the same location, then Amaryn will appear and converse with the grove with disapproval.

After their conversation, you need to anoint the altar again for the last time and then an Oberon Fevarch Specter will appear and attack.

Once defeated, the voice will tell you to flee as it will try to hold off the Grineer, but Amaryn appears again with resolve and tells you to stay and defend the shrine.

You must now protect the shrine for 2 minutes against Grineer, including Napalms, Flame Blades, Elite Lancers and Hyekka Masters.

After defending the shrine, the voice will introduce itself as Silvana, the one responsible for Titania and the Silver Grove.

Silvana then tells them about Titania and how she tried to protect her. Amaryn then vows to Silvana that Titania will fly once more.

When you complete the mission, you will receive the Titania Neuroptics Blueprint.

Then you will receive a message from Amaryn in your inbox declaring the doctrine change of the New Loka and with the message is the Main Titania Blueprint, finally completing all the blueprints needed for the Titania Warframe.

The Silver Grove mission involves the discovery of the past which brings you up to revealing Titania and allows you to acquire her upon its completion.

While this mission is considered to be very hard for most players, it can prove to be quite challenging for those who have progressed more in the game.

When facing multiple enemies, keep in mind that the Grineer are not like the Corpus and therefore are very prone to abilities.

You can use Mesa, though may be strong but she is still vulnerable when using her Peacemaker.

After getting all the blueprints from The Silver Grove mission, you can now proceed to farm the resources to build it.

Then you can finally build the Titania Warframe

This is a list of which planets hold the resources needed for crafting your Titania, you can either do missions or use an Extractor on the earth to maximize your chances to get the resources you would need.

Tellurium is a rare resource that can only be obtained with a few specific missions.

Nitain Extract is a unique resource that can only be obtained in a few ways.

Farming will take a while as some of the resources in building the Titania require some specific missions or ways, but completing this build will be worth it for both the great story and the powerful Warframe.

Titania is one of the few Warframes that come with a versatile kit. Her abilities will let you be a strategic support and, at the same time, a destructive Warframe along with her excellent crowd control that makes her one of the more versatile Warframes in the game.