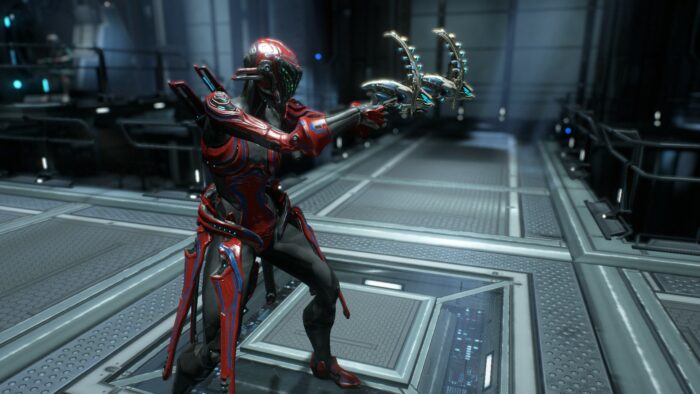 Even though nowadays there are a lot of different, viable support Warframe in the game (looking at my bestie Wisp), for the longest time there was simply no dedicated farming group without a Trinity.

And even today you often pick the fairly classic support frame that can replenish energy and health as well as reduce the incoming damage up to 75%.

Especially if you’re trying to get into the harder parts of the game, owning and using a Trinity will be very beneficial.

Even though it might seem super simple, getting to fight the Ambulas will bring a few different hurdles. First of all you need to make your way through the star system and actually reach Hades on Pluto.

Once you’re there you need to acquire 20 ‘Animo Nav Beacons’ before you are allowed to even challenge Pluto’s assassination target.

Luckily, once you’ve successfully beaten the boss you will get a refund of 10 Animo beacons and if you fail the challenge you don’t lose any at all.

To actually farm those beacons you will have to get into Corpus missions with an open-air tileset (e.g. the Corpus Ice Planets or the Corpus Outpost).

There you will encounter special corpus drop ships every three to five minutes, making endless missions like defense or interception the best way to get your hands on those beacons.

These drop ships will not only bring a group of corpus units, but also have a chance to drop an Ambulas unit at higher level missions.

Attack it until it is down and quickly hack it to gain control.

Once successfully hacked it will not only fight for you for a short amount of time, but also drop a few of the Animo Nav Beacons.

Once you’ve joined the mission you need to make your way through the map to the fighting arena to trigger a short cut scene and start the fight.

The fight itself basically consists of two phases:

In the first phase you will encounter drop ships that do bring at least one and up to three Ambulas down on you.

The fight itself is basically the same as during the beacon farming, so shoot the Ambulas down and hack it to start phase two.

Once you’ve successfully hacked an Ambulas you need to protect it from incoming enemies. Especially flying drowns can quickly sneak up and hack the Ambulas, which will reactivate it again.

You need to shoot enemies down before that happens, because after a certain amount of time the drop ships will come back and pick up the Animus units.

If you hacked (and protected) those units, you will upload a virus to the mother ship for each successfully hacked unit.

Since you need six (and you can only fail two times or the mission will be aborted) you really need to protect those hacked units.

If you don’t own a lot of Warframes and weapons, it is probably best to either bring a tanky Warframe like Rhino or Inaros or to pick a support Warframe and hope to get grouped up with some DPS frames. Here are our best overall picks:

In the end there is a wide variety of potential Warframe picks and you should always bring your strongest picks to boss fights.

Besides from killing Ambulas units as quickly as possible it is also not a big weapon fight, so it doesn’t really matter if you’re picking a shotgun like the Tigris Prime or if you rather bring a sniper rifle or a normal rifle – as long as you are able to actually deal some decent damage.

Once you’ve gathered all the component blueprints for Trinity from Ambulas and if you’ve bought the main blueprint from the ingame market for 25.000 Credits you can finally start on gathering all the resources needed to actually craft the Warframe.

Here is everything you need:

Even though you probably will get your Trinity later on (let’s be honest here, the beacon farming can get too grindy), actually crafting the supportive Warframe isn’t super expensive to do.

The uncommon resources are

Even getting all the rare resources shouldn’t be a problem:

Once you’ve gathered enough resources and Credits you do need to wait 12 hours for all components to craft as well as 72 hours for the Warframe to finish in your foundry.

The beacon farming can be boring and annoying, especially if you start at zero.

We highly recommend trying to combine the farming with high level relic (Axi!) openings or maybe Kuva Lich farming if you do have the right nodes for that.

Otherwise don’t forget that it is totally okay to take a break from the grind and do something you enjoy more – you can always come back to the Trinity farm at a later point.

If you do want to post your own ideas, found any mistakes or if we missed some important information, make sure to leave us a comment down below!