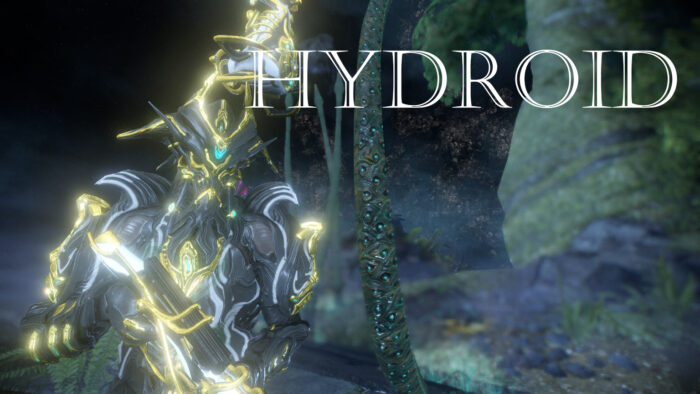 Hydroid is a water based Warframe that was released in 2014. His unique skill set makes him fun to play and especially his ultimate ability Tentacle Swarm is why he is very valuable in every Warframe collection.

He has really cool animations, a solid damage output and is used in a lot of resource farming groups.

Getting his parts early on is somewhat hard, because you have to farm Councilor Vay Hek on Oro, Earth.

This boss requires some better weapons and understand of the tactics and therefor isn’t very noob-friendly.

But if you manage to kill him a bunch of times and get the parts you need, using Hydroid can be a real blast.

If you want to know how to get your hand on the Warframe, we recommend reading our guide!

Most of the time Hydroid will be used in a premade farming group, meaning that you don’t really need Rejuvenation or Energy Siphon since you will have an EV Trinity as an ally.

Getting Corrosive Projection is almost always the right choice and will help you to kill enemies faster.

But if you like to play with random people or alone, picking one of the other auras might be okay as well!

Tip: If you want to know more about Hydroid and his abilities, feel free to take a look at the wikia page!

This is the build you’ll use when you start farming for resources. Pilfering Swarm plays an essential part in this build and will give you an addition drop as long as you kill mobs when they are held by your tentacles.

So you press 4 (and hold it for a few seconds), cast your Tentacle Swarm and either kill everything in range with your abilities and weapons or you have a bunch of nice team mates with you.

Since this is a dedicated farming build you don’t need efficiency – you should always have a Trinity in your group.

So you should aim to get a good mix of all of these three ability modifiers and top your build with vitality in order to get some more survivability.

Endless missions are your friends when you are using this build, since you can get a lot of resources in a small amount of time.

If you want to spend more Forma you can use mods like Umbral Intensify and sacrifice some ability range for more strength.

If you don’t want to farm for resources and still like to play with Hydroid, just remove the Pilfering Swarm and add more efficiency.

Undertow is your third ability and is pretty fun to use. Sure, this build is more on a casual side, but if you get a solid build you can deal a good amount of damage.

Once you press 3 you will transform into a puddle of water, trapping every enemy who walks over you.

But what can you do when they don’t want to walk over you, you ask? Well, simply press your left mouse button and hook them in with your tentacles!

You can also use your ultimate ability while in puddle form, dealing a lot of damage to everyone trapped inside your pool.

The build itself is somewhat similar to your main build, because you want a lot of rage (to become a bigger puddle) and a good amount of strength to kill trapped enemies faster.

Instead of duration you’ll be stacking some efficiency and now you are good to go! You can even try to use the augmented mod Curative Undertow to get an even more casual build, but I would not recommend it.

Just put your puddle somewhere, hook in some enemies and have fun killing them with nothing but water pressure. Oh, and don’t forget that you can move slowly while in water form!

Hydroid is a really fun-to-play Warframe with a unique set of abilities.

He is essential for a lot of resource farming groups, can be played in solo mode and also has some more casual approaches.

If you manage to get your hands on his prime parts or if you farm his assassination node, you’ll quickly find a lot of benefits in playing him.

Just keep in mind that playing with a dedicated premade group yield the best results and usually is more fun than playing alone!