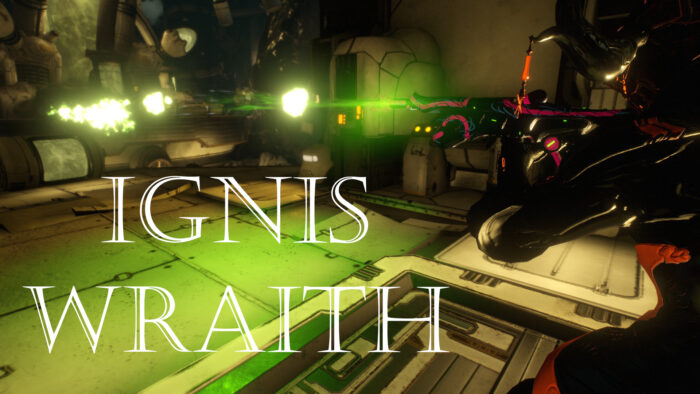 The Wraith version of the Ignis features not only a bigger magazine size, but also offers a higher critical damage as well as a better status chance.

Combining those stats with the great flexibility of the weapon and the great area-of-effect damage (thanks to the big beam) does allow a very good damage output, especially against groups of enemies.

Playing the ‘flamethrower’ feels very strong, even without putting a lot of Forma into it, but once you’ll manage to get four or five extra polarities in there you are able to carry even higher level missions by simply using the Ignis Wraith.

Getting the weapon is somewhat easy, because some clans do offer the blueprint for free or for a very low amount of Platinum, so you should probably check and ask the region chat or in the trading chat for that.

From time to time Baro Ki’Teer will also bring the blueprint and then you are able to buy it for credits and ducats.

If you didn’t manage to get yourself a Ignis Wraith, consider building the weapon as soon as possible, because it will help you out a lot throughout the game.

The innate heat damage on the Ignis Wraith can be a blessing and a curse at the same time. The blessing part is that you can get combined elemental damage like gas or radiation with just one elemental mod, which does free up a mod slot for your builds.

Curse part will make sure that you will always have heat damage on the weapon, which weakens it against a lot of Corpus units.

So when building and using the weapon, make sure to always keep that in your mind.

There are some mods you probably always want to include in any build suited for the Ignis Wraith. So every build should start with including Serration, which is overall the best mod for every rifle-type weapon.

There is also a good chance you almost always want to include Heavy Caliber, because it will increase your damage output by a lot and then just go from there.

Tip: If you want to know more about the Ignis Wraith and its abilities, feel free to take a look at the wikia page.

The best build usually revolves around the strengths of each weapon and since the Ignis Wraith mainly convinces with the high critical chance and critical damage, using Vital Sense and Point Strike should be a no-brainer.

Thermite Rounds and Malignant Force are used to strengthen the second biggest advantage of the flamethrower weapon, which is it’s status chance.

Split Chamber will increase your damage as well and Vile Acceleration does help with getting more damage ticks out in a shorter amount of time. If you rather have some punch through, use Shred instead.

While Thermite Rounds is the obvious choice to increase the innate heat damage on the weapon even further, you should switch the second elemental damage mod depending on your plans and needs.

It is also possible to simply not use a second (or even the first) mod if you are fine with just using the innate heat damage on the weapon. Instead you might take a look at Critical Delay, Hammer Shot or Vigilante Armaments.

This is probably the build you want to pick if you don’t think that using the extra status elemental mods is going to help you in your mission.

It looks pretty similar to the standard build, but features the combined additional damage increase of both Vigilante Armaments and Vigilante Fervor.

Critical Delay is also a nice addition, but the somewhat slower fire rate can become problematic, especially against higher level enemies with lots of armor.

Vigilante Fervor counters this a bit, but you should always be on the move when shooting with your Ignis Wraith.

Mods you also might want to try out are Bladed Rounds and Argon Scope if you do like to aim while using the Ignis Wraith as well as Hammer Shot to increase the DPS a little bit more. You can use those mods instead of Critical Delay!

This build uses the already high status chance of the Ignis Wraith and tries to increase it even further.

All four +60% status chance mods (High Voltage, Thermite Rounds, Rime Rounds and Malignant Force) are a great addition here and if you use Hammer Shot as well you can even reach 100% status chance – but that is not needed at all.

Vile Acceleration helps with faster procs, but can also just be a Shred if you rather have the extra punch through.

While this build seems a little big weaker (especially compared to the ‘standard build’) it is very nice in missions that will throw a lot of different enemies at you.

Void missions come to mind, but you can use this build on fissure missions as well, because the fissure will spawn enemies from all different fractions.

This build is way more on the casual side of things and tries to get some good damage output with the combination of Firestorm and Combustion Beam.

Other than those two mods it is close to the standard build and should just be seen as a funny addition to that. How much damage you can deal with this build really depends on the amount and type of enemies you are expecting to meet.

High armor or shield enemies are a nightmare for this build, so don’t even bother trying it there.

But if you are going to run some lower level missions, this build can actually do some decent damage.

Exploding enemies will kill big mob groups in just a few seconds and the Firestorm mod will visibly increase the beam, so you really feel like using a flamethrower.

Just make sure you’re not going to face a lot of high level enemies and you’ll be having a lot of fun!

Getting yourself an Ignis Wraith can be a little bit harder than with most other weapons, but once you’ve build yourself a flamethrower you don’t want to stop using it.

The area-of-effect damage is great, the status chance is high and to be honest, who doesn’t want to burn enemies to ashes with flames and beams and stuff.

So go ahead, get yourself the weapon and try out our different builds – and have fun while doing that!

If we missed a build, feel free to post your own ideas here and leave a comment!