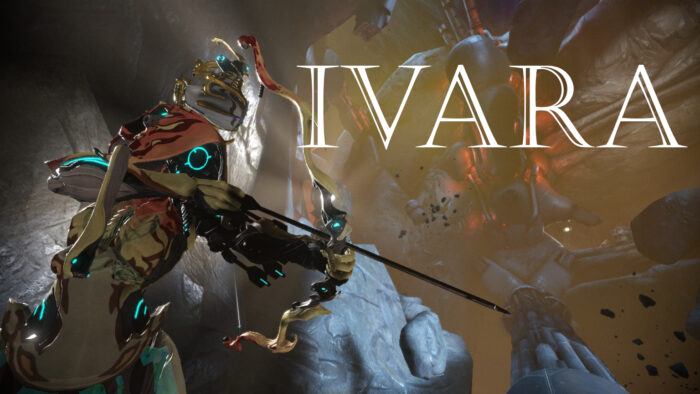 Farming Ivara is a hassle and can be super frustrating, since you get her different parts from doing spy missions. Doing it over and over alone is boring, but doing it with random team mates that might trigger an alarm and not finish in time is even worse.

So a lot of people either skip getting Ivara or buy her later on for Platinum. And doing the latter is fine, because she is very great and especially – but not limited to – shines during spy missions. She is a silent and deadly huntress and can kill everything with her bow.

She can even shroud her team mates and make sure that everyone is safe – at least for a moment. You can even use her against high level enemies and successfully deploy her in Sortie or Arbitrations missions. Just make sure to pick the right build.

If you are looking for a guide on how to farm the blueprints needed to craft Ivara, head over to our ‘How to get Ivara’ guide and learn everything you need to know about your hunt!

Energy Siphon or Corrosive Projection are a must-have on Ivara and especially the energy regeneration helps out a lot.

Even though she isn’t a caster Warframe in the conventional sense, she still uses a lot of single casts and channeling her invisibility also requires a lot of energy. Because of this, you almost always want to use Primed Flow or its normal version.

A good amount of efficiency is also very helpful, so keep an eye on that while building your Ivara. Picking Vitality is also recommended in every build, because 225 health at level 30 are way too low.

Imagine getting poison stacks or slash damaged – you would be dead in seconds.

Before we start talking about the different Ivara builds, we do need to find the best build for her Warframe weapon, called ‘Artemis Bow‘.

But to be fair, building this weapon is pretty standard, because you do use two elemental mods of your choice, a high amount of multishot and of course Serration, Point Strike and Vital Sense – which is the usual mod selection for bows (and lots of rifles as well).

The only somewhat unusual choice here is Hunter Munitions, which can be switched out for Heavy Caliber or Critical Delay.

Don’t forget that punch through has no effect for the Artemis Bow, so picking Shred is not recommended.

If you feel like you are shooting way too slow, feel free to pick Vile Acceleration instead.

Ivara’s ultimate ability is called Artemis Bow and will summon the Warframe weapon from pure energy, replacing whatever weapon you are currently holding.

Since neither duration nor range have any influence on your bow, picking a high ability strength combined with a good amount of efficiency will yield the best results.

You also want to activate your third ability most of the time, since becoming invisible will allow you to easily survive incoming mob groups.

Mods to think about are Umbral Intensify for the normal version and Redirection for Augur Secrets if you need extra survivability.

One thing you should also know about your bow is that holding down the fire button will only tilt the fired arrow row about 90 degrees, but has no influence on range or damage of your shots.

This version centers around your second ability and uses a mix of duration, strength and efficiency to give you the best results.

To be fair, this build is more on the casual side, because controlling your arrow for a long amount of time and killing lots of mobs while doing so is very hard – and not especially fast.

The mod choices are pretty straight forwards, with Piercing Navigator being the only exception. If you manage to get into the flow of your arrow, you can quickly kill all your enemies and the extra critical damage helps a lot.

But you can also just pick more ability strength or efficiency. Oh, and don’t worry about being exposed while flying around with your arrow: You automatically become invisible once you activated your two and shot an arrow.

If you don’t have a bow equipped, just use your fourth ability to summon one an you are good to go!

This build is the main reason why a lot of players eventually buy and build Ivara: The augmented mod Infiltrate allows you to simply bypass lasers during spy missions without activating the alarm, making Spy and Rescue missions super easy and way faster.

During those missions all you want to do is activate your third ability and then rush through the map.

You don’t need to add ranged mods if you don’t care a lot about the extra loot and instead you could add whatever you like most.

Use a good amount of duration and efficiency and you are good to go.

Rush isn’t great if you plan to move through the map while invisible (and you could use Enemy Sense or Cunning Drift instead), but you could also not use your Prowl until you are close to the Spy room. Pick whatever you like most for that mod slot.

Ivara is not your average DPS Warframe, but she isn’t just a second Loki either. Her invisibility works in a different way and she benefits from using silent bows a lot.

Using her during spy missions is super strong, especially if you don’t know all the short cuts on the map or if you simply want to rush through the mission. But she can also shine during high level missions and deal a good amount of damage with her own bow.

Just make sure to practice a bit before hand, because shooting her Warframe bow feels somewhat different from normal bows. Other than that, feel free to experiment with all the augmented mods, find your own builds or just enjoy the ideas from this guide.