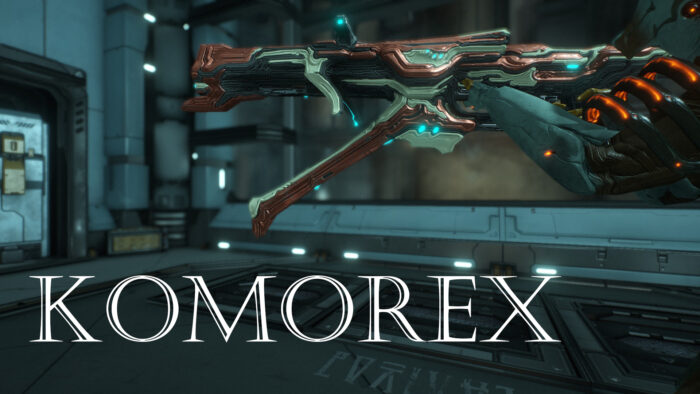 With the introduction of Amalgam units and mods in the game it was not really a question ‘if’ an amalgam weapon would be integrated into Warframe, but ‘when’ and ‘how’.

Well, the answer is called ‘Komorex’ and not only uses Sentient technology, but does work great as a sniper rifle with a very high status chance and two different zoom modes that add different bonuses to your shots.

It even does come with an innate Sniper Ammo Mutation! Getting the weapon is pretty easy, because you simply need to research it in your Energy Lab first, before you can finally replicate the blueprint and craft the Komorex at your foundry.

Make sure to stock up on Hexenon, the resource only found on Jupiter missions.

If you don’t really know what mods to use and how to build your own Komorex, you came to the right place.

While you will need to invest four to six Forma into the weapon, you will get a decent sniper rifle with good area-of-effect damage and a fairly big magazine size.

While the Komorex does feature the lowest critical chance of all sniper rifles, it still has a decent enough chance to think about building for critical damage.

Purely building around that isn’t recommended though, because the high status chance is just too good to not be used.

You should also know that you should mostly use your second (3,5x) zoom mode, which not only gives you extra damage, but also a blast radius – so play accordingly and make sure not to kill yourself accidentally with your own weapon.

Another important information is the fact that you get innate viral damage on your second zoom mode, so if you want to add elemental damage, think about increasing your viral damage output.

You could also combine it with corrosive or gas damage to quickly deal with Grineer or Corpus enemies.

This build completely ignores the critical chance and multiplier, simply because you’re not going to get a very good damage output by working around that.

Especially the fairly low base damage is problematic and even if you deal critical damage it won’t be as high as with any other sniper rifle.

So instead this build uses the normal rifle mods (Serration, Split Chamber, Vigilante Armaments) to increase the damage output and abstains from using Heavy Caliber – missing a shot with a sniper rifle feels super bad and you don’t really want to risk that in a low fire rate weapon.

You also really want to use two +60% status chance mods and combine them with the elemental damage mod pendant.

We do go for blast damage here, simply because the extra crowd control feels very strong with the blast radius you get when playing in your second zoom mode.

You could also go for more viral damage or simply add gas or corrosive damage against Corpus or Grineer units.

Fanged Fusillade is your weakest mod and could be replaced by anything else you want to use instead – namely Primed Fast Hands to combat the slow reload speed, Vile Acceleration to get the increased fire rate or Continuous Misery to get even higher benefits from your status duration.

While the critical damage output is not the best (because of the low base damage), you still might want to try and use this hybrid build in different missions.

The combination of standard rifle mods, two +60% status chance mods (you don’t need to build your Komorex for viral damage, but it can be very beneficial, especially with some critical procs) and the three critical damage mods (Vital Sense, Critical Delay and Point Strike) can still be very strong.

Make sure to always use your second zoom mode for the added +100% damage and the extra blast radius is also quite nice.

Your weakest mod by far is Critical Delay and there are a few different mods you might want to try instead: Hunter Munitions will still proc fairly often, especially due to the added blast radius, which will hit multiple enemies at the same time.

Bladed Rounds is also a very nice addition, because you’re not going to un-zoom a lot, so you will benefit from the bonus all the time.

You also might want to think about putting in Vile Acceleration against lower level enemies, so you can pop them fast enough.

We will add this build pro forma, but to be honest it is the weakest one of the three different builds displayed here.

That said, there are only a few instances where you really want to use it. The Profit-Taker Orb fight might be one of them, fighting against very high level enemies while having a Condition Overload equipped might be another one.

But the difference between 97,5% from the standard build and the 100% from this build isn’t that high and usually not worth the lower damage output.

If you’re going for this build, you really want to bring Continuous Misery to get the increased duration for all three status procs – on second zoom mode this build will give you viral damage, corrosive damage and blast damage.

Primed Cryo Rounds is used to get some higher damage per shot output, but can easily be replaced by Vigilante Armaments or Vile Acceleration for more DPS.

The Komorex is actually a very nice sniper rifle, but does work in an unorthodox way. The high status chance feels pretty great, but the lowish critical chance and the really low base damage are two big factors everyone needs to know and think about.

So in the end it really comes down to the question ‘Where do you want to use this weapon?’, simply because there are not a lot of missions where this weapon can truly shine.

The added blast damage is super strong, but playing a sniper rifle in indoor tilesets oftentimes feels clunky and problematic. You also don’t really want to bring it to the open world nodes, because you rather have a better critical chance on your sniper weapons for that.

So in the end you really need to decide where and if you want to bring the Komorex.

If you think we missed some important information or if you do like to add your own build, feel free to leave us a comment!