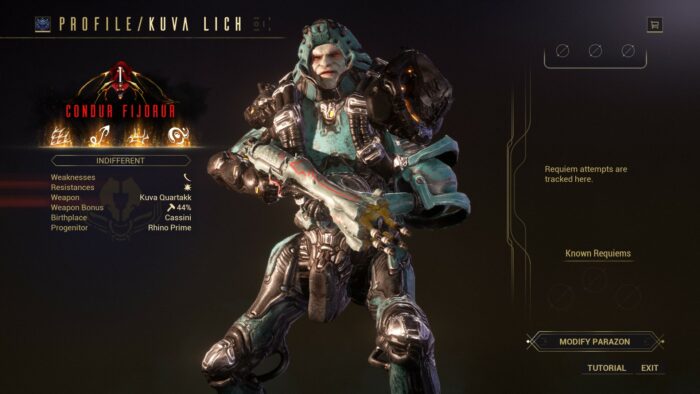 The biggest addition included with Update 26 (‘The Old Blood’) is your own personal archenemy, called ‘Kuva Lich’. The special boss enemy will base his stats on the first Warframe you encountered his ‘larva’ with and your weapons and Warframes used to fight his minions, so you can basically create your own, perfect boss.

Even though the Kuva Lich is based on the Grineer faction, your personal rival is spiked with Kuva and therefor super tough, strong and smart.

They also will steal some of your loot while you’re trying to find out how to kill them, featuring the Parazon – a new personal weapon that every player can find in their loadout screen.

Even though the whole creating, searching and killing of your own Kuva Lich is fairly complicated and grindy, the content is really fun and will present new challenges.

This article will guide you through the whole process and explain in detail how you actually start on your own Kuva Lich, what you should look out for and how you can either kill or convert your archenemy in the end.

Before you can actually start on the Kuva Lich content you need to finish the ‘The War Within’ quest line, so if you haven’t done that already, keep pushing for that content!

If you’re through with that you can simply start by going into any ‘normal’ Grineer mission in the Origin System to start looking for a Kuva Larvling – you won’t find those in Sorties missions, Void Fissures, Dark Sector runs, Nightmare nodes or quest-related missions.

So pick any regular level 20+ mission on a Grineer planet (Saturn, Uranus, Sedna and the Kuva Fortress) and simply run through it until you see a message popping up on your screen, saying that a Larvling has spawned.

Follow the new red quest marker, kill the Larvling and finish the mission. In retaliation to your actions a Kuva Lich will be created.

Your Own Kuva Lich

From now on your own Lich will talk to you between missions (and even during missions). Every Kuva Lich has a completely unique name, a unique weapon and unique stats, all based on the Warframes and weapons you use.

From now on your Kuva Lich will also start stealing parts of your loots and rewards, which can be resources, Credits, mods, Endo or even relics.

If you decide to kill your Lich in the end you will get all those rewards back. From this point forward you do have a few different approaches to follow.

We recommend starting with grinding for the Requiem Relics, opening them and getting a few Parazon mods before you actually start hunting your archenemy.

To successfully kill a Kuva Lich you will need to equip three Requiem Mods to your Parazon.

We will explain which mods you need further down this article, but for now you need to know that those special mods only drop from opening the Requiem Relics.

To farm those special relics you need to finish Kuva Siphon and Kuva Flood missions. Those are special missions that appear on planets close to the Kuva Fortress.

Each Kuva Flood has a 100% chance to drop one of the four Requiem Relics and each Kuva Siphon mission has a chance of 30% to reward you with one of those.

Those relics are basically the same as the normal relics, but instead of dropping prime parts they will give you the following:

As with all the other relics you can also upgrade the Requiem Relics by using Void Traces and refine them from intact to exceptional, flawless or radiant, changing the drop chance for the rare rewards accordingly.

To open a relic you have to join a Requiem Fissure (scroll down your Fissure tab to find the mission) and equip your relic. Gather ten reactants, finish the mission and pick your reward – you know the drill!

For now you really want to farm all eight different Requiem Mods unless you already know which three of those you’re going to need to kill your Kuva Lich.

Once you’ve gathered all eight of these mods you can finally start gathering information on your archenemy before you hunt them down and either kill or convert them.

Now begins the information gathering on your Kuva Lich, because in order to finish them off later on you need to know which three of the eight mods you need to use on your Parazon – and in which order.

To gather that information you basically have two possible ways. We’re starting with the (for now) easiest version, which is finding and killing Thralls.

These are basically lackeys of your Lich and will appear in any mission node that your Lich has influence on.

To find one of these missions simply head into your Star Chart and find planets with an unusual red mist.

Click on one of those planets and you’ll find that some (or even all) nodes have this shiny red mist, so pick one, bring your strongest equipment and start the ‘Controlled Territory’ mission with your Lich’s name on it.

It is important to note that those missions can be really hard and usually feature enemies with a level of 65 to 105, so you really want to bring strong weapons and Warframes.

Depending on what you use during those missions your Lich will adapt and change, so you might want to think about that as well.

For now just do the mission and kill every Thrall you encounter (they will be marked with a special red maker!) and use your action button to finish them off, which will increase your ‘Murmur’.

Once you’ve filled one of these (you’ll need to kill a lot of Thralls) you can switch into your Kuva Lich Profile screen and see one of the three Requiem Mods required to later on kill your Lich.

The new, known and first mod doesn’t necessarily have to be the mod you need to equip into the first slot, but can also be the second or third mod needed for the sequence.

Keep on killing Thralls until you know all three Requiem Mods needed and you can finally start hunting and killing your Kuva Lich.

The second idea is to simply enrage your Lich by killing Thralls and finishing missions under the influence of the boss until you fully filled the bar (check the Kuva Lich Profile page for the rage bar).

The higher the rage of your Kuva Lich is, the more likely it is for the Lich to randomly appear during one of the Kuva Lich missions.

If your Lich appears you can attack him with your weapons, destroy their shields and the first health bar and quickly rush towards the Kuva Lich and use your action button.

Your Warframe will quickly switch to the Parazon and attempt to kill your archenemy. If you have the right Requiem Mod in the first slot you ‘destroyed’ the first health bar completely and you can attack the second health bar.

If you have the wrong mod equipped, the Kuva Lich will kill you and vanish (for this mission).

So you can basically start guessing which mods you need for the first, second and third mod slot and eventually kill the boss enemy.

Killing or Converting the Kuva Lich?

Once you’ve finally figured out the right Requiem Mods and order to defeat the Kuva Lich you can simply join a Kuva Lich influenced mission, wait for your Lich to spawn and then fight him.

Once you’ve successfully killed your Lich you have to decide if you are either ‘Convert’ or ‘Vanquish’ them.

So you basically have decide if you rather have a strong ally fighting by your side from time to time or rather get the rewards. Pick whatever you want and like!

You should also know that your Requiem Mods have three charges, with one charge being consumed when you kill the Kuva Lich.

So you eventually have to replace them, but at least your are able to break your used mods down and get some Endo!

You can check the remaining charges by hovering over a mod (e.g. in the Parazon screen) and counting the red dots – each dot represents a charge.

How To Kill Kuva Lich (Tips and Tricks on Fighting)

The Warframe and weapon you bring to kill your Kuva Larvling has a big influence on the different abilities, weaknesses and resistances of your own Kuva Lich, so feel free to experiment around with different load outs.

However, as you keep gathering information and killing Thralls you will eventually have to fight your Kuva Lich without the right Requiem Mods equipped – which will change the archenemy as well.

So keep visiting the Kuva Lich Profile page and check for his weaknesses and resistances. Change your loadout accordingly – for example, don’t bring a weapon with Corrosive damage if he has a resistance against that damage type.

As (play)time goes by, your Lich will also gain levels and become stronger(up to level 5!), so in the later stages you really need to bring your A-Game and your best equipment.

If your Kuva Lich kills you two times in a single mission, he will vanish for that mission and you have to start a new node.

So make sure to either bring a tanky Warframe like Rhino or Inaros or get really good with dodging the attacks and finding a good placement to shoot the boss enemy.

It is also important to note that your Warframe abilities won’t influence neither the Thralls nor the Kuva Lich, so a Slow Nova, a Nyx or any other crowd control based frame won’t help directly against the Lich – but they will help you control the battlefield around you while you fight against the boss.

So in the end you have to find a setup that suits your own play style – there is no general ‘right’ way to fight against the Kuva Lich!

While dealing with your own Kuva Lich will always return all the stuff they stole during your missions, killing rather than converting them will result in a new Kuva weapon for your arsenal.

It will always be the weapon your Kuva Lich has equipped (so check the profile page beforehand) and it will appear already fully build in your foundry.

Here are all the potential weapons(rewards) your Kuva Lich might drop:

As you can see, with the except of the last three weapons, all Kuva weapons are based on other basic weapon variants and basically work like the ‘primed’ version of those weapons.

They feature increased stats and will give you Mastery Rank experience up to level 40.

To increase the max-level of your weapon you need to invest one Forma, witch each Forma rasing the maximum level two levels – so you need to use five Forma to reach rank 40.

Since there is no guarantee that your Kuva Lich will use a Kuva weapon you need, you currently have no other choice than killing or converting your Lich and hope for another weapon on your next try.

The idea behind your own, personal archenemy is great, but it is also fairly complicated and grindy.

Especially for the first Kuva Lich kill you’re going to have to run around a lot and check different guides like this one. But finally killing (or converting) them is a great feeling.

So keep on fighting the good fight, get all the new Kuva weapons and have fun playing the game!

If you think we missed some important information, if you have any questions at all or if you simply want to add your own tips and tricks, leave us a comment and let the world know!