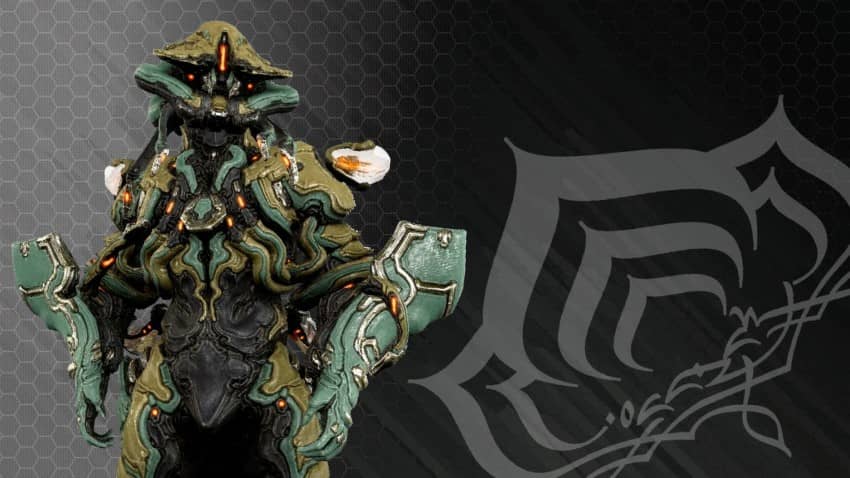 Apart from the Prime builds, Lavos is one of the latest Warframes in the game and the 45th addition.

He’s not too different from Saryn since he’s snake-like and his damage-spread ability is similar to his too.

Lavos has a kind of sorcerer-meets-alchemist theme to his play style.

He can use various elements as they are or combine them to make different effects. Radiation is one example of this.

Let’s take a closer look at how to get Lavos and best Lavos builds in Warframe.

How To Get Lavos Blueprints and Components

Head to Deimos for the components and blueprints needed to create Lavos.

You will find ‘Father’, who is an NPC selling them if you have sufficient Phasic Cells.

The main blueprint for the Lavos build has a price tag of 1500 Phasic cells and each of the 3 components costs 1000 Phasic Cells.

So to buy all Lavos blueprints you will need to spend 4500 Phasic Cells.

Although you can get these from Deimos doing that, the drop rate is only between 2 and 4% so you will probably have to repeat the missions a number of times.

You can at least earn part of what you need for the Lavos build from these missions before you get tired of doing them.

If you don’t want to do the mission or spend the Phasic Cells, another option is to grind down Void Relics.

You can then sell the parts for Platinum. Lavos is available with an Orokin Reactor already installed from the market. It will cost you 325 Platinum.

Lavos has the ability of Cooldown and in fact is the first Warframe to have it.

Warframes used to have to use Energy for ability-casting and there wasn’t a limit to how many abilities you can use.

Since Lavos has Cooldowns this means you have to wait after using the Energy for it to regenerate and then you can use it again.

This means a wait but it also means you won’t have to worry about Energy depletion.

Ability Efficiency mods will affect Cooldowns, plus each time Lavos gets a Universal or Energy Orb (max one in 5 seconds) no negative Status Effects can touch him and he has immunity for a further 10 seconds to other Status Effects.

Remember these use Cooldowns (time) rather than fuel.

Here are the four main build abilities you get with a Lavos build as well as how mods will affect them:

Unleash serpents from Lavos’ arms and get a 100-degree cone of snakes.

These make enemies vulnerable to melee finishers for a short time and inflicts Toxin damage.

The radius of the cone is 8 meters and you can apply Ability Range mods to increase it.

Lavos recharges his health for a percentage of damage he was dealt every time a serpent bites an enemy.

Ability Strength mods affect health regained as well as damage dealt. Another idea is to hold down the Ability key.

This will add Toxic Damage to the following ability cast, so you can cast Viral, Gas or Corrosive damage in addition to a good secondary element.

Launch this floating drone towards your reticle and it will deal Electric damage to enemies close by, floating in a straight line.

Use the Ability Range to improve the length and radius of the drone’s path and Ability Strength mods to increase damage dealt.

Press the ability key to stop and start the currents’ stun effect probe.

Every enemy stunned shortens the Cooldowns for every ability for a second, and you can even use Ability efficiency mods to improve this even more.

Your Lavos build will slide for 30 meters in a straight line (depending on Ability Range mods added).

He will cast vials from his belt and leave behind an ice trail to deal nearby enemies Cold damage.

Use the extra Ability Duration on to make it last longer. After this, Lavos will create an explosion to inflict more Cold damage.

To launch the explosion before the 30 meters, you can choose to stop Lavos’ charge at any time.

Ability Strength affects how much damage you can deal. Hold down the ability key if you want to add Cold Damage to Lavos’ vials.

That way it will be added next time you cast his ability.

Lavos is able to conjure up a ring made up of 9 Catalyst Probes.

They travel in every direction, spraying flammable gel under and over enemies in the proximity, inflicting Heat damage.

The damage dealt doubles for every elemental Status Effect used by the enemy.

Lavos excels at Exterminate, Survival and Defense missions so consider building it for these.

You do need to keep on the move though which is different from other nuke type Warframes such as Saryn Prime.

So consider Continuity for extra duration, Corrosive Projection to strip armor (if needed) and Augur Secrets and Intensify for more Ability strength.

In addition, consider Fleeting Expertise for more Efficiency and Stretch and Augur Reach which will benefit all other abilities Lavos has with better Ability Range.

Blind Rage gives more Strength at a cost of some Efficiency and Vitality offers Improved Health, which is useful when you’re surrounded by enemies.

Keep Lavos on the move, for the best result, using as many different Status Effects as possible.

You will find Lavos fun to play with because he can cast any possible Status Effect there is and control the elements.

If you can shorten Cooldown times with the third ability and nuke with the fourth, your Lavos build can take you far in the game.