No other Warframe splits the community like Limbo does: The Master of the Rift is part of the game since 2014 and was changed around quite often as well as his primed version Limbo Prime which was released in June 2018 .

The reason why Digital Extreme keeps on changing the Warframe isn’t because he was either overpowered nor underpowered, but he had a very big troll potential. People started to put their team mates into the rift for 30+ seconds and there was no way out.

Nowadays you can’t do that anymore and even if a team mate gets put into the rift plane by Limbo’s passive, you can simply use your roll ability (Shift on default) and switch back into the normal dimension.

Even though a lot of changes reduced the grief potential he is still hated in a lot of groups. But if you play him right, he is super strong and can carry you until the late game without any problems. Just make sure to find a good build that suits your needs and don’t try to troll your team mates!

Building Limbo or Limbo Prime shouldn’t be hard, since he is pretty strong even if you don’t have all the high end mods.

Yes, you do need to use some Forma before you can get the best builds possible, but compared to other Warframes he doesn’t need as many resources, Forma or time invested.

Picking the right polarity for your aura slot is pretty easy as well, since you either want to use Corrosive Projection or Energy Siphon – so using the Naramon polarity is highly recommended.

A few quick words about the different augmented mods for Limbo: While they seem okay and fun, generally speaking they are not worth using. If you want to try them out and use a more casual build, go ahead and do so!

Tip: If you want to know more about Limbo and his abilities, feel free to take a look at the wikia page! 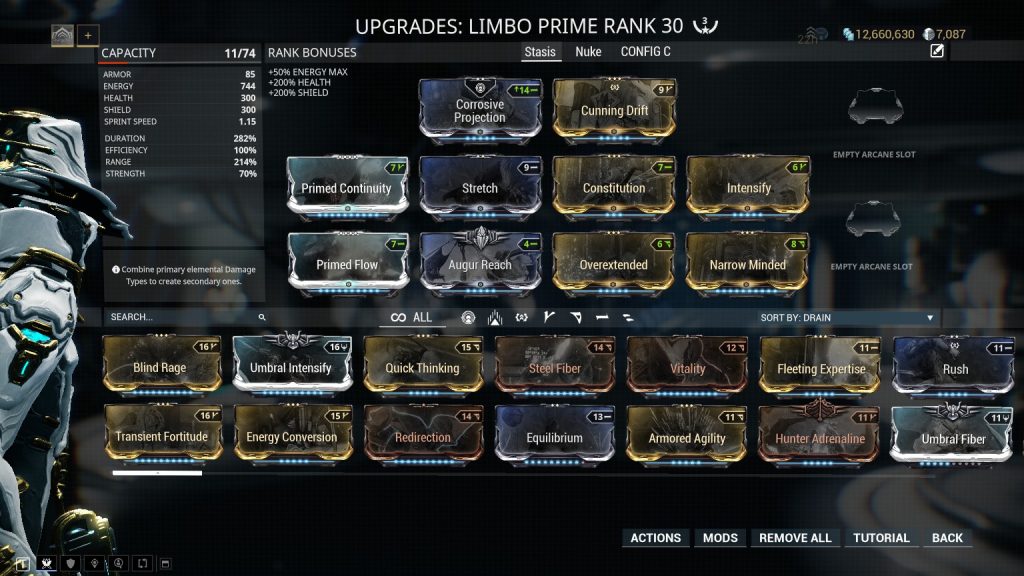 This is the standard build of your Limbo and abuses the power of your ultimate ability Cataclysm, while combining it with your second (and third) ability.

So the main idea is to cast a really big cataclysm with a good amount of duration and then use your Stasis to freeze every enemy that is inside or enters that big rift blob. You either then use your third ability or weapons to kill everything in side and use your abilities again once they are about to run out.

Don’t forget that you can manually close your cataclysm by pressing 4 again and then quickly recast it.

Dealing damage might become a main problem if you plan on going solo, but if you do have DPS capable team mates, picking a Limbo is super strong in mission types like excavation, defense missions with a walking operative or during endless survival trials.

The build itself should be self-explanatory, since you simply stack duration and range. Mods to think about are Vitality and Redirection or even Natural Talent.

You usually don’t need either, but the same is true for Intensify or Primed Flow, so feel free to switch some mods around. 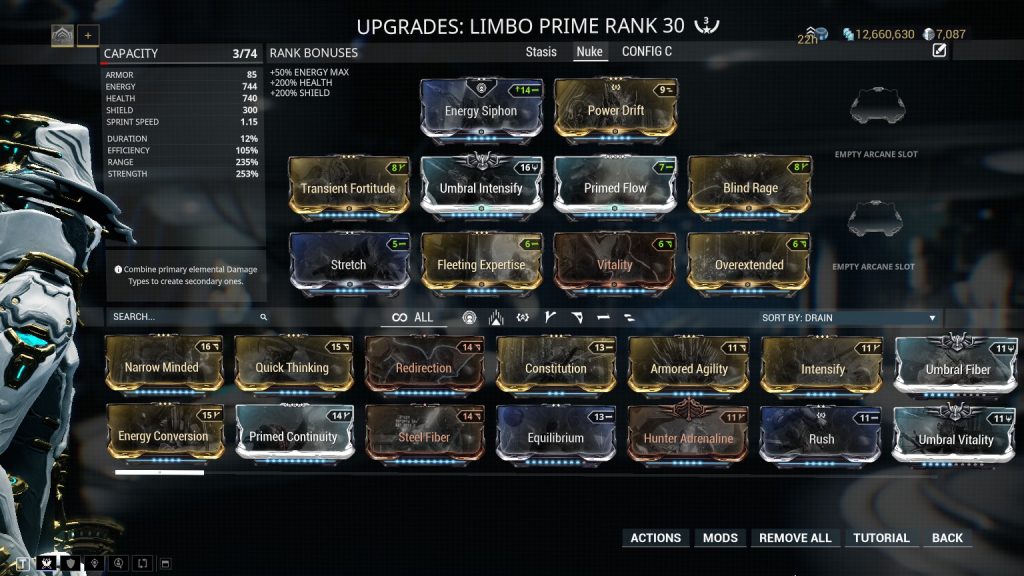 This Limbo Prime build is somewhat unusual, since you’re not going to abuse the power of your Stasis ability. Instead you’re going to use Cataclysm to nuke every mob in range.

To accomplish this goal you need to stack range and strength in combination with a good amount of efficiency – so this build is pretty much what you are looking for. Even Umbral Intensify is somewhat important, but can of course be switched out for it’s normal version.

This build will one-shot almost every unit under level 30 and can still two-shot lots of enemies on Neo or Axi level. So if you are looking for a easy-to-play Nuke build, simply use this one.

You do activate your Cataclysm and either wait a few seconds for your ability to run out of duration or simply press 4 again to close it instantly.

Mods also worth using are Energy Conversion, Natural Talent and Umbral Vitality (to combine it with the one already used). Feel free to experiment a bit and find the build you do like the most.

Limbo Prime is super strong and can carry you through endgame missions without any trouble.

The fact that you can simply switch over into the rift by pressing Shift on your keyboard will help you survive against all incoming damage – which is super useful if you want to rush to a rescue target or carry the device to the next mobile defense station.

Cataclysm also allows you to protect a huge area and is especially strong against The Infested, because almost every unit there is a melee attacker.

And if you ever run into a team that doesn’t want to play with Limbo, simply restart the mission after the first round and go again.