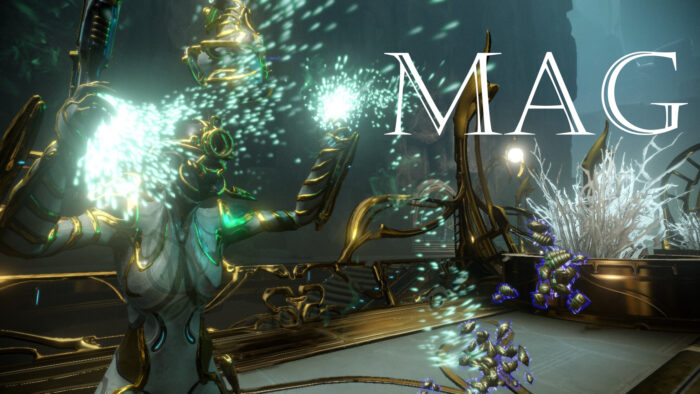 To this day, Mag does have a special place in Warframe. She was one of the first Warframes ever released and can still be chosen as a starter Warframe.

Over the years Mag got changed quite often and even though she once was one of the most used caster in the game, nowadays she seems to have lost her space in the meta.

Especially after nerfing the Greedy Pull Build picking her as a main DPS is usually not worth it – at least in comparison to other Warframes.

But she is still super fun to play, has some interesting builds and can be used in a lot of different settings.

So if you pick her as your first Warframe (or if you farmed her parts on Iliad, Phobos), give her a chance, try out different builds and just kill everything and everyone in your range!

If you don’t have Mag yet and you are looking for some help on how to get the magnetic Warframe, head over to our ‘How to get Mag’ guide and enjoy our tips and tricks.

Even though Mag Prime has a lot of disable, building and playing her usually revolves around some sort of damage output.

Dealing damage with your Mag requires a lot of energy, meaning that you almost always want to use the aura mod Energy Siphon to get that extra energy regeneration.

Since her energy pool is pretty low without Primed Flow, getting that mod is very important for every build you’re going to use.

You also need to invest around three or four Forma to get enough mod capacity for all the great builds. But be careful before choosing the polarities, since you need different polarities for the different builds.

Following the builds presented here is a good idea, even if you don’t yet have all the mods you need.

Tip: If you want to know more about Mag and her abilities, feel free to take a look at the wikia page!

Building around your third ability can be very strong, especially if you plan to fight higher level enemies.

Sadly, this ability is useless against The Infested, so playing it against this faction is not recommended if you want to deal any damage with your ability.

Against high shield or armor enemies it is very strong and especially if you manage to involve Counter Pulse you’re going to carry your team during mid and late game.

Other than that, building for your third ability isn’t as easy as it seems, because you do want all stats as high as possible.

A good amount of duration will help to get a good amount of reach, range will increase the explosion radius of your proc (and raise your damage output with that), while efficiency and strength are also important.

So experimenting around is very important, since you sometimes want to get more strength or duration or use a survivability mod like Redirection.

Against lower level enemies Counter Pulse feels really useless, so switching it out for more damage or range is always nice.

This build is the main reason why Mag used to be one of the most played Warframes in the game: Before changed were made, Greedy Pull would pull pickups towards your group for everyone and not only Mag.

Nowadays, using this build is still fun and especially strong in lower level missions (against enemies up to level 30), so feel free to try it out! You simply want to stack range and strength and combine it with a good amount of efficiency.

Then you find yourself a good spot and press 1 until everyone around you is dead. You don’t even need to use Greedy Pull, but it is super comfortable.

If you are looking to make some changes, picking up Energy Conversion, Redirection or even Umbral Intensify might be a good place to start.

More strength is always nice and will help you kill higher level enemies. You should always have a good weapon equipped to deal with high armor enemies.

Since you’re going to pull them into your melee range, a good shotgun like Vaykor Hek or the Amprex is a fine way to deal with everything your ability won’t kill.

This build is centered around your ultimate ability Crush and works somewhat similar to the Greedy Pull Build, but can deal way more damage at once.

Also if you are planning to bring this build into higher level missions, picking Corrosive Projection as your aura mod might be a good idea!

To change this build, start with either the augmented mod or more ability strength. Umbral Intensify (or it’s normal version) are fine, Energy Conversion might also convince you during your trial phase.

The weakest mods are probably Vitality and Streamline, so switch out these for everything else.

Sadly, Mag isn’t the damage dealer she used to be. Her ability set is still fine and fun-to-play, but she lacks the damage output other Warframes do have.

There are also builds out there that try to abuse her second ability, but those builds are generally speaking somewhat complicated to play and are more specialized as the rest.

But feel free to find a build that suits you and your play style and try to bring Mag back to her glory days!