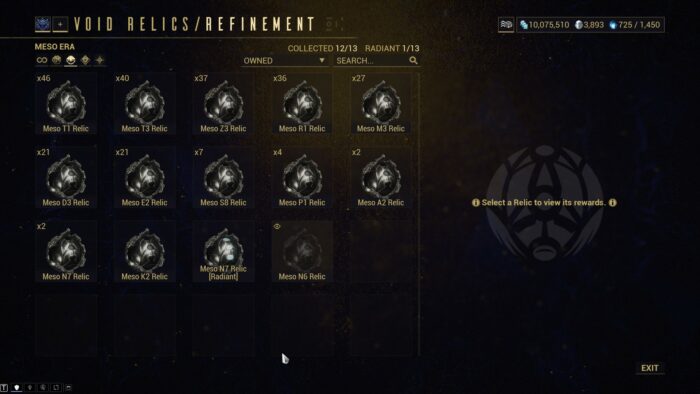 Most people have very few Axi relics, but there is also an undeniable shortage of Meso relics in the game.

The main reason for that is that there is no mission that will drop a Meso relic with a 100% probability – especially the tier 2 endless missions feature a very bad drop chance compared to all other relics and endless mission tiers.

So by simply looking at the drop chances, farming Meso relics can be super troublesome and problematic.

Luckily this guide will help you with your endeavor to grind enough Meso relics to get all the primed weapons and Warframes currently in the rotation.

Make sure to follow our tips and tricks and you should be able to get your hands on exactly the Meso relics you need.

Here are the best Meso drop locations in order:

The best drop chance for a Meso Relic is found on either Io (Jupiter) or Paimon (Europa), with the first one being the better choice – but not by a lot.

There are some smaller reasons why people usually pick the Jupiter mission over the Europa version: First of all Jupiter does drop Hexenon, which will be needed for some weapons and the Wisp Warframe.

Secondly, the enemies are a few levels below the enemies you will encounter on Paimon, which gives you the ability to be a little bit faster with clearing the waves.

And last but not least Paimon will eventually spawn a drop ship, oftentimes at the end of a wave. This will make the whole mission longer (even if its just 20 seconds for each drop ship spawn) and therefor more annoying.

You only want to farm the A-rotation of this defense mission (a.k.a. the first ten waves) for the chance to get the Meso relic drop.

With a 87,5% chance you should be able to come out of ten waves with two Meso relics, but sometimes you are just unlucky and hit the 15 Endo drop two times in a row.

Sadly, there is no other mission with a better drop rate, so you are stuck with that. The positive aspect here is that you can kill the waves pretty quickly.

Especially if you bring one of the following Warframes:

If you don’t want to play a DPS Warframe you might enjoy playing a Speed Nova more.

Against the lower level enemies you don’t really need to bring a special weapon as long as you are able to kill the flying Oxium Ospreys and the Amalgam units that will spawn at the fifth and tenth wave.

You should be able to get one relic drop every two minutes (loading the mission, killing the target, extracting and restarting the mission takes a bit), so you have a good chance to get yourself a Meso relic drop in a short amount of time.

The key here is really speed, so these are the Warframes you might want to think about:

Another problem people do encounter while running the capture mission over and over again is the fact that it becomes boring pretty fast.

So just do a few runs and if you get bored, switch over to Io, Jupiter, and try your luck there.

Farming Meso relics is probably the most annoying relic tier to grind for. There is no mission with a 100% drop chance and especially if you’re trying to get a specific relic it can get boring very fast.

So if you feel like you’re getting burned out, try to switch to something else and come back later on. There are also other missions with a worse drop chance, but getting a change of scenery can oftentimes work wonders.

Try out the Tier 3 Bounty missions or give Tier 2 Interceptions a chance.

Also, if you think we missed some important information or if you simply want to add your farming tip to the guide, make sure to leave us a comment!

3 thoughts on “Meso Relic Farm (How to Get Meso Relics)”