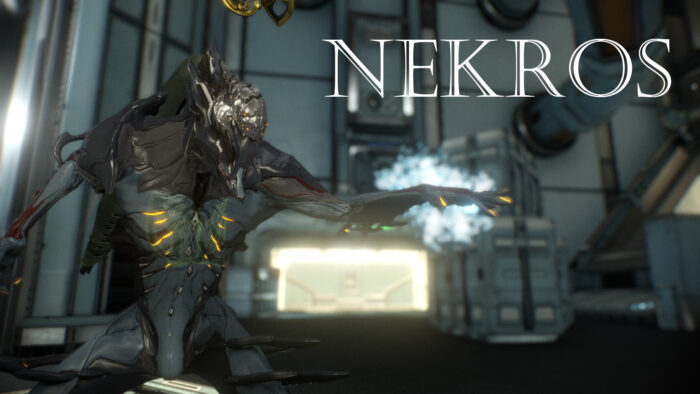 Nekros was released in 2013 and is to this day one of the most important Warframes in the game, simply because of his ability to boost your resource farming by a lot.

But even outside of his main use he has a great skill set and will allow you to shine in a lot of different mission types. From low Lith missions up to Sortie level war zones you can find a use for this great Warframe and combine it with a lot of different premade groups.

Just make sure that you are never alone, because unless you really try to build around your first ability, your main damage output won’t come from Nekros, but from your weapons.

Finding the perfect aura polarity isn’t that easy and highly depends on what you plan to do with your Nekros.

If you simply need it to farm resources or Endo in a premade group, choosing a Naramon polarity for Corrosive Projection is the right choice and will allow you to kill everything a little bit faster.

But if you want to use your Nekros in different kinds of settings and builds, going for Varzarin polarity and Rejuvenation is a useful move.

It will work well with your ultimate ability Shadows of the Dead and if you are using the Despoil build, having that extra heal is really important.

Tip: If you want to know more about Nekros and his abilities, feel free to take a look at the wikia page! 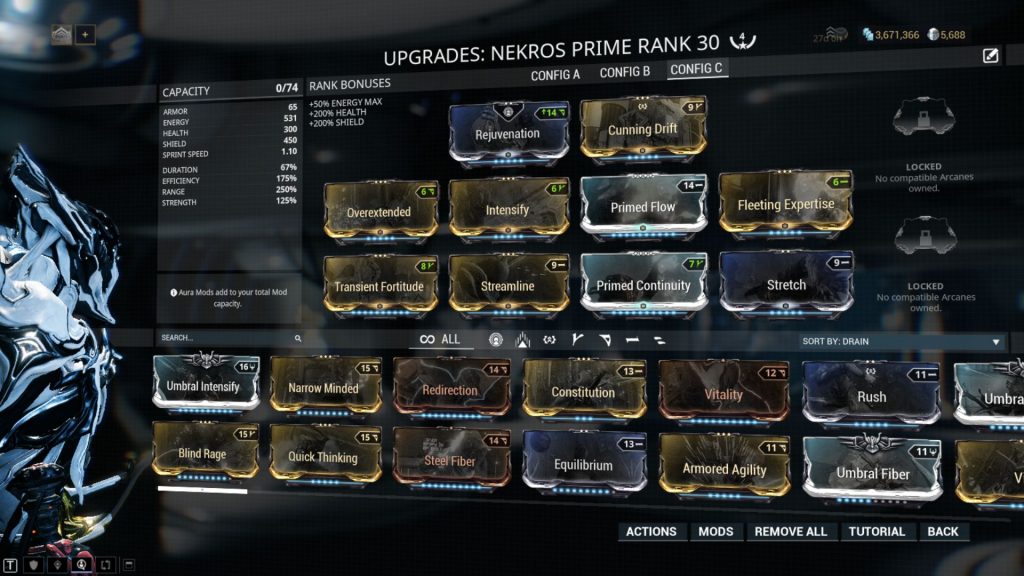 The main reason why Nekros is such a strong and often used Warframe is because of his third ability: Desecrate will allow you to get another chance at loot after an enemy is killed.

All you need to do is channel your ability and use your energy to dissolve the corpses around you.

In 54% of the time you’ll get another drop, from energy and health to more credits and mods or even Endo, Life Support, Power Cells and every resource that the specific enemy can drop.

The build is pretty easy and even without all the corrupted mods you can get a decent build. Just get as much efficiency and range as you can and pick mods that will help you survive.

Getting some strength and duration will also allow you to cast Shadows of the Dead from time to time and block attacks if needed – e.g.

If you need to revive an ally or if you need some more survivability for a short amount of time.

Keep in mind that this build really depends on you having a Trinity with you.

You will use up a lot of energy and without the help of your teammates you won’t be able to sustain the energy requirements for dissolving every corpse around you.

You can try to drop some Squad Energy Restores, but usually it isn’t worth using those.

This build is best be used in high density missions like survival, defense, mobile defense or excavation, since you want to kill a lot of enemies in the least amount of time to get the maximum amount of loot. 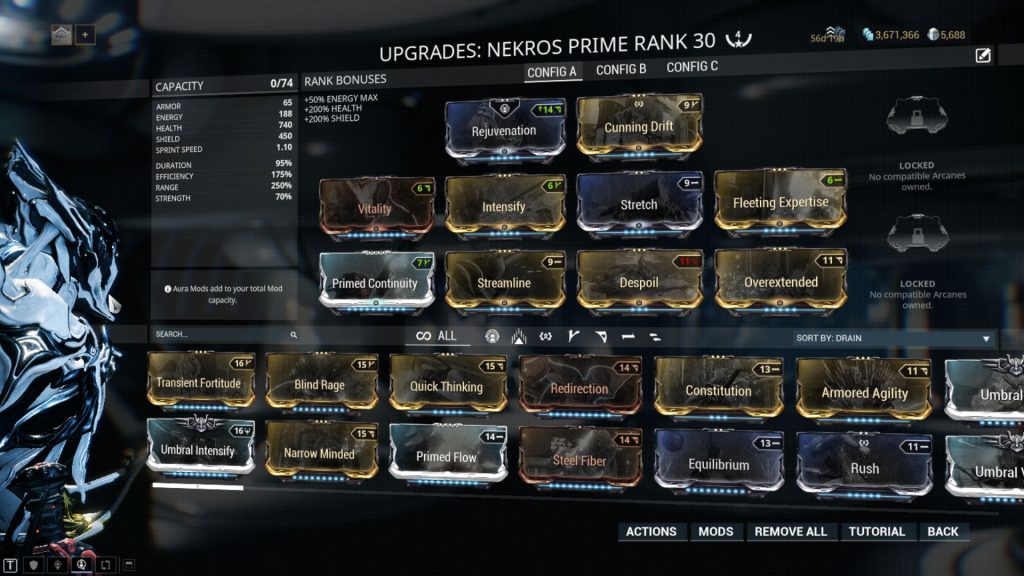 Sometimes you just can’t find a Trinity in the recruitment chat.

Sometimes you just want to join a random group and still farm some extra resources and credits. But doing so with the main farming build is pretty tough.

That is why this build evolves around the augmented mod Despoil: Instead of using your energy pool as a resource, you’ll use your health pool. Now why is that better? Good question!

First of all you most likely use Rejuvenation, which in comparison is way better than Energy Siphon.

Secondly, health orb drops are way more common than energy orb drops and thanks to your Desecrate you will have a lot of health orbs lying around, healing you up and giving you more casts of your third ability.

You build your Nekros the same way as in the main build, but you’ll sacrifice some ability duration and strength for a more stable build.

Shield of Shadow: The Tank Nekros 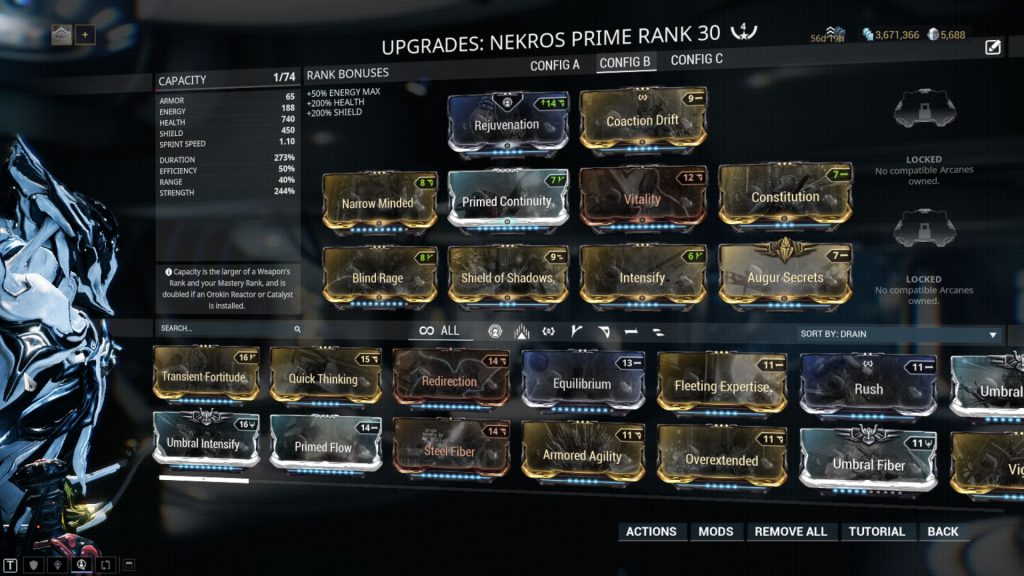 Your fourth ability Shadows of the Dead will revive up to seven enemies from the dead, fighting for you from now on until they die again.

If you want to make sure they’ll survive quite some time, add a lot of duration and ability strength to your Nekros and combine it with Vitality for some survival.

Also use your augmented mod Shield of Shadows, which will redirect some damage you take to your shadows, making you more tanky.

The 6% doesn’t sound that much at first, but remember that EACH of your shadows absorb that much damage – if you have seven shadows walking around, they do give you 42% damage reduction combined, which is quite a lot.

You can really go and tank defense survival, boss fights and even do really well in Sortie missions. Just try it out and be surprised!

Another Tip: Coacation Drift is also really strong in this build, since it boosts Rejuvenation, which doesn’t only heal yourself, but also your shadows.

If you have a Trinity (or another healer) in your group, their heals will also affect your shadows.

Since you can’t summon new shadows unless the old once died, make sure to communicate with your teammates if you want them to let your shadows die.

Another thing to remember: You can only revive shadows of enemies you killed yourself, so make sure to pick a good weapon to get your first seven kills.

Nekros doesn’t seem super strong on his own, but if you use him in a good team environment you will find him to be one of the essential farming Warframes.

Every resource farming group needs one Nekros, therefor getting him early is really important. Farming Orokin Derelict Assassination alone isn’t that easy, so try and get a group together.

Just ask in the recruitment chat or find a good gild that is willing to help. If they help you, you’ll be able to help them soon with your Nekros during farming runs. It is a win-win for everyone!