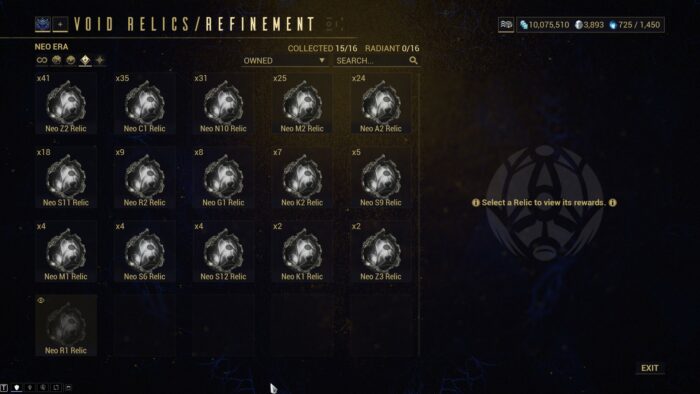 Neo relics are probably the easiest tier to get of all relics in the game: If you are farming for Axi relics on B- and C-rotation you do oftentimes get Neo relics from the A-rotation.

And if you are grinding for Meso relics you are able to stay a little longer and get a shot for Neo relics during the later rotations as well.

But while you naturally end up with more Neo relics during your run through the game, you eventually need to farm the new Neo relics to get new primed Warframes and weapons – and therefor find the best places to grind for the relics.

This guide will not only tell you the exact locations to farm with the best efficiency, but will also explain in detail what you need to look out for and what equipment will help you to accomplish a fast Neo relic farming rate.

There are also a lot of other missions that do drop Neo relics, but they are inefficient compared to the ones named here – either in drop chance or in the time needed to get through the rotations. Here are the best farming missions for Neo relics:

Mithra is arguably the best choice to farm for Neo relics: The A- and B-rotation do have a 100% chance to drop a Neo relic, with the C-rotation giving you a 100% drop chance on an Axi relic.

You can even ‘cheese’ the missions and farm it completely alone without any trouble (more information on that is available in our Axi Relic Farming Guide).

But playing with team mates is often easier, more reliable and for most people more fun – so going into Mithra should be your first choice.

Here are the Warframes you should think about when going into the mission:

Playing as a Slow Nova will make the mission super easy. Slowing down enemies gives you and your team mates more time to react, to dodge attacks and to position well to kill off enemies as needed.

Make sure to cast your ultimate ability ‘Molecular Prime’ on a spot where it will hit all four towers and you should be good to go.

Bringing a crowd control build can be super beneficial for this map. You can easily cover all four towers and make sure that the enemy is stunned or at least won’t be as much of a challenge.

If you are looking for a build, we recommend our Volt ESO build.

Bringing Wisp into this mission is actually a very strong pick. Distribute a Vitality Mote on each tower (which makes defending way easier) and put one Haste Mote and one Shock Mote in the middle of the map so everyone can reach them as needed.

Alternatively you can put a set of the three different motes on the D-Tower and another set in the middle of the map close to the B-tower.

It doesn’t really matter what weapon you pick here, just make sure it is good against the special unit composition Void missions do have. Otherwise just bring your best weapon and kill everything.

Often forgotten or underappreciated are the Tier 4 Bounty missions for Orb Vallis and the Plains of Eidolon.

They only drop the newest relic additions, but you can check beforehand which rotation is currently chosen and what relic will potentially drop from doing the bounty run.

You also have the chance to get a bounty on four of the five stages (with the exception of the first stage), so if you are very lucky you will get four relic drops in a really short amount of time.

Since the bounties also only drop the newest relics added with the latest primed Warframe it is also a great way to farm these specific relics.

Mesa is probably your best choice for these missions if you prefer to play as a DPS, but you might also try out Nova for the crowd control part.

Otherwise pick whatever you are comfortable with and have fun doing the bounty!

Of course you will be able to farm other (endless) missions as well and have a decent chance to get the relics you want and need.

Belenus (Void) for example is a great way to get a chance for Meso, Neo and Axi relics.

Especially Void missions are a great source for a good mix of new and older relics, so farming these missions is a great way to simply increase your collection.

If you are farming for a specific relic, the other maps mentioned in this guide are usually a better choice though.

If you think we missed some important information, feel free to leave a comment and share your knowledge with the world!