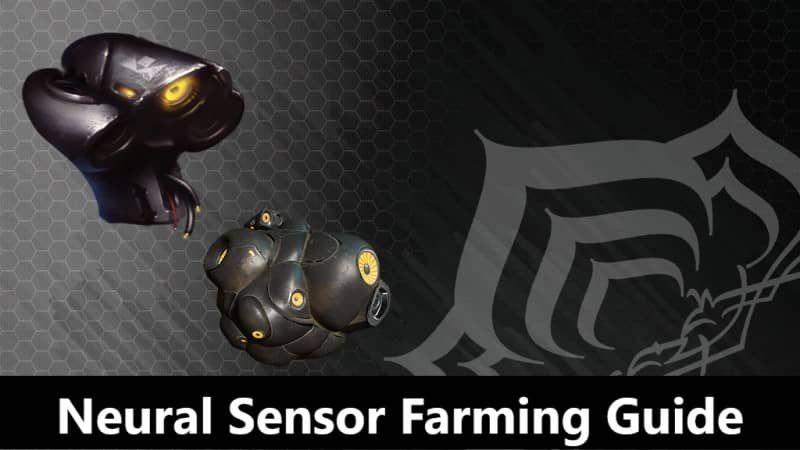 In this warframe guide you will find everything important about neural sensors and also the best places for farming these rare components.

First of all, what are Neural Sensors? Well, these components are relatively rare in the game and they can be used to craft various gears.

You will need them to craft Forma and some Warframe systems and neuroptics plus other weapons. Although they aren’t the most common resource you can often collect them without even noticing.

The best place for a Neural Sensors farming expedition early on in the game is on Jupiter. They can drop from enemies here at any node.

Some nodes tend to be better than others for farming though.

Kill certain bosses or farm them in specific missions to easily acquire Neural Sensors. There isn’t much chance they will drop from containers but it’s always a possibility.

It is more efficient to kill plenty of enemies on planets with Neural Sensors with the help of a squad. This helps you maximize your chances of success on a run.

Where to Farm Neural Sensors?

Jupiter and the Kuva Fortress are the only locations to farm them.

Jupiter is easy (and a better place to start out if you are a newer player) but sometimes you can get an impressive amount during Kuva Fortress’s survival mission.

So choose Jupiter if you’re relatively new to Warframe or Kuva Fortress if you’re more experienced and don’t mind the trickier process.

Now let’s take a look at the best locations and missions for neural sensor farming:

As long as you can handle a lot of enemies at one time, Kuva Fortress is a good place to get Neural Sensors.

This particular mission is a good one for dropping plenty of Neural Sensors, even if you are farming solo rather than with a squad.

If you do go with a squad though, you can get a good amount of them.

Remember this mission is also great for Kuva farming so you hopefully you will be able to get plenty of both types of resource.

This Dark Sector survival mission can be compared to an infested variation of Elara (incidentally another good Neural Sensor farming location).

However, you get a dark Sector bonus with Cameria giving you a 20% increase in the resource drop rate. This makes it a better place for farming.

This survival mission is pretty easy to complete. Find somewhere on the map with just one entrance and stay there.

The Infected come to you. If you can run a team using a Nekros you can use the Desecrate ability to get more loot from dead enemies.

Another good tip is to run Warframes like Khora with Pilfering Strangledome or Hydroid using Pilfering Storm to maximize loot drop chances.

Have one person bring a stealth frame. That way they can exit the room you are using for a base and obtain life support capsules without dragging enemies away.

Jupiter’s Infested are at a lower level than the Grineer in Kuva Fortress, so they are simpler to kill. This means you can stay to farm for a longer period during the mission.

Another tip is to bring Warframes like Hydroid or Nekros (or both) to force loot from enemies and speed up your Neural Sensor farming.

This is a common way to get Neural Sensors. Although it’s a quick run to make, you won’t always get the components you’re looking for.

To get a decent amount of Neural Sensors in this mission you have to pay attention to loot containers and be fast. Try to rush through the level as quick as you can, killing enemies and also destroying lockers.

The goal is to shake down Alad V and Zanuka. When you accomplish this, you can expect them drop some Neural Sensors. You might also find loot containers and loot-dropping enemies along the way.

Grind the level a few times and you can end up with a good quantity of the resource.

Repeat Themisto if you’re a newish player, since this should yield a good amount of Neural Sensors without being too tricky.

Try anywhere from five to ten Themisto runs in one session. You can kill Alad V over and over and get more Neural Sensors each time you do it.

#4 Io – Jupiter (Defence against the Corpus)

Io is another good node you can farm on Jupiter.

It isn’t the best place to farm for Neural Sensors but if you only need a few you can typically find what you need.

You can also get Oxium as well as Relics when farming this node.

Oxium is a resource you need plenty of and Meso Relics are easier to find here than anywhere else.

For a longer Neural Sensor farming period, try Taveuni if you are up for it.

Cameria is a simpler alternative. You can do any of these solo but if you can go with a squad, then you can expect even better results.

Bear in mind Neural Sensor drops are influenced by whichever resource boosters you are using. You can buy these from the marketplace.

After that, you can spend a long weekend farming these resources.

The Charm ability of Smeeta Kavat can also boost how many Neural Sensors you can get.

Although you can always get Neural Sensors from the marketplace as a last resort, some players find it a waste of precious Platinum units when they are so easy to farm (especially on Jupiter).

With the above tips, you now know how to farm Neural Sensors most effectively and where to go to find them.

Gather a squad, ensure everyone stays together while the enemies are rushing in, and you should be able to leave with a decent amount of Neural Sensors.

If you need extra, remember you can repeat Themisto on Jupiter a few times, pretty much guaranteeing you a good amount of Neural Sensors.