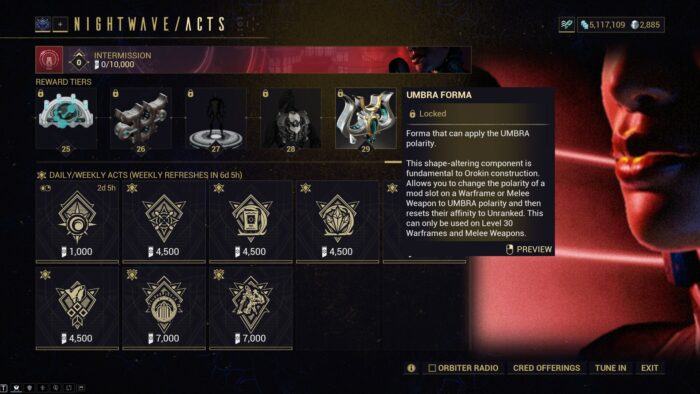 Its been a whole week without solving quests for Nightwave, but the wait is over: The next Nightwave Intermission is now live and will give you not only weekly missions, but also a way to still farm for cosmetics, Orokin Reactors and Orokin Catalysts, Nitain Extracts as well as other useful items. There will also be ranks to gain and rewards to claim, but this time the maximum rank got increased to 30.

There is currently no official date for the end of the Nightwave Intermission, but it will probably only be here for ten to twelve weeks. After another short downtime (probably another week) Nightwave Season 3 will start – so keep an eye out for that. Until then we recommend just doing the quests, farm more Creds and use them before the intermission ends. If you are completely new to Nightwave, we recommend reading through our quick F.A.Q. !

As mentioned above the Nightwave Intermission will only have 15 ranks and you can’t gain ‘prestige’ after you’ve reached the max rank. Here are all the ranks and their respective rewards:

<i>Digital Extremes</i> also changed the ‘prestige’ in Intermission and now you are able to reach 30 extra ranks once you’ve reached rank 30 with all the normal rewards. Each rank after that will give you extra Creds (x15 per rank). We also don’t know if there will be additional Intermission standing to farm. We will keep you updated on all the newest information regarding Nightwave and the Intermission.