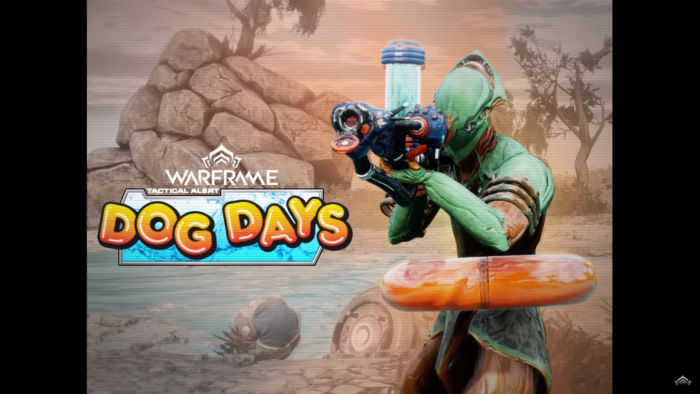 The latest update did bring a short hotfix (25.5.1 and 25.5.2) as well as a really surprising and fun-to-play tactical alert, called ‘Dog Days‘. The hotfix itself features a few bug fixes, optimizations and a few smaller changes, but overall nothing really big was changed or added. If you really do like surprises then stop reading right now and head into the mission. Really, stop reading. Now. Otherwise: Spoilers ahead!

To introduce the really nice, shortish tactical alert, Digital Extremes created a funny little video we don’t want to hold back. So give it a look before you keep on reading:

The gameplay is super easy to understand: Inside the mission you need to use your water gun to ‘kill’ enemies. Use your alternate fire button to keep up the pressure of your weapon (a.k.a. pump the water gun) and run into the waterspout fountain to keep your ‘ammunition’ high. To progress through the four missions you and your team need to get a certain amount of kills (25, 50, 100 and 200), but the points earned are commutative, so you start with half the points already once you’ve reached the next tier. Each round is five minutes long.

The mission gameplay doesn’t really change, the enemy level (and damage output) however increases noticeable. Once you’ve reached the threshold needed, you gain the rewards and move on to the next round. The rewards are:

From today until August 6 (until 2 pm ET) you also have a double credit booster going (which does multiply with the normal credit booster), so head into The Index or your favorite credit farming mission and use it while you can. You will also automatically be entered into the Space Ninja contest with the chance to win $250.000! If you want to know more about that or the event, head over into the official forum and read the official post about that!

Don’t forget to bring the Nakak Pearls earned during the tactical alert to Nakak on Cetus (Earth) and trade them for a lot of cool stuff. If you need more Nakak Pearls, then keep on playing the Dog Days missions!