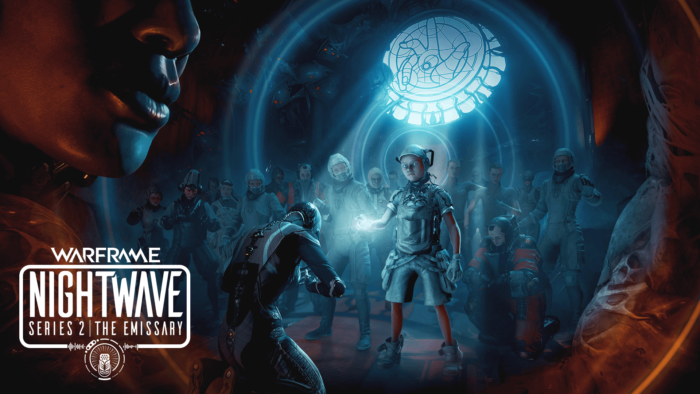 Lore-wise Nightwave is a pirate radio station, operated by the mysterious Nora Night.

The game mode (or rather ‘Syndicate’) did replace the classic alert system Warframe and Digital Extremes used to give players access to the aura mods, different Warframe helmets, Nitain Extracts and more.

Current system is called ‘Nightwave’ and basically works like a battlepass system: You get daily and weekly quests, which in return give you Nightwave points after you’ve finished them.

These points will rank you up and with each rank-up you gain new rewards.

While you are able to get special credits (in Season 1 they were called ‘Wolf Creds’, in Season 2 they are called ‘Emissary Creds’) to trade for all the drops you used to get from alerts, you will also get some nice cosmetics, very rare and special mods as well as Umbral Forma and more.

If you are new to all this, there will be a lot of questions.

We gathered the most common ones and will display them and the answers here.

How many ranks can you climb in Nightwave?

There are currently 30 ranks with more or less different rewards on each stage.

You can simply click on the Nightwave button and see all ranks as well as the rewards you will be able to get.

What happens after you reach rank 30?

Once you’ve reached the maximum rank you will be able to keep on playing. Each new rank up (so every 10.000 Nightwave points) gives you more Nightwave Creds.

So even if you reach the maximum level fast, you should keep on doing the daily and weekly quests.

How many Nightwave Creds can I get?

Within the first 30 ranks you can get 400 Nightwave Creds. It is currently not clear how many you will be able to get once you’ve reached max rank.

What should I spend Nightwave Creds on?

To be fair, you should always get what you need. You will need a lot of Nitain Extract, so get that.

Getting the aura mods (especially the best aura mods) is very important, so keep out an eye for those.

Vauban is currently not a strong Warframe, but if you are a collector (or just want to try him out for yourself), use your Creds on his blueprints.

Orokin Catalysts or Orokin Reactors are great if you need them. Helmets are fine, skins are fine, but you really want to get the important rewards first.

How come I can’t get the mods I’ve seen a few days ago?

The mods that can be traded for Nightwave Creds chance every few days. There is a timer on the bottom left that will tell you when you should be able to see new mods.

Remember: You don’t have to use your Nightwave Creds the moment you get them, so just wait until you know exactly what you want and need.

Do my Nightwave Creds count for next season as well?

Sadly, no. So make sure to use all your Nightwave Creds at the end of the season.

How long is a season?

The second season will give you ~10 weeks to complete all 30 ranks and to get your hands on all the rewards you want and need.

So you really have more than enough time to do all the daily and weekly quests and rank up the standing.

What happens if I don’t finish a daily or weekly quest in time?

If you don’t finish a daily quest in time, you won’t be able to finish it at a later point.

However, if you don’t finish a weekly quest before the weekly rotation, you will be able to recover those quests later on.

Simply work your way through your current weekly quests and once you’ve done all those, the quests you haven’t finished before will come back.

How many daily quests can I gather before?

Each daily quest gives you 72 hours to solve it, so you can have a maximum of three daily quests active before the first one rotates out.

If you think we missed some important questions or if you simply want to ask about certain information, feel free to leave us a comment and we will help you out as soon as possible!