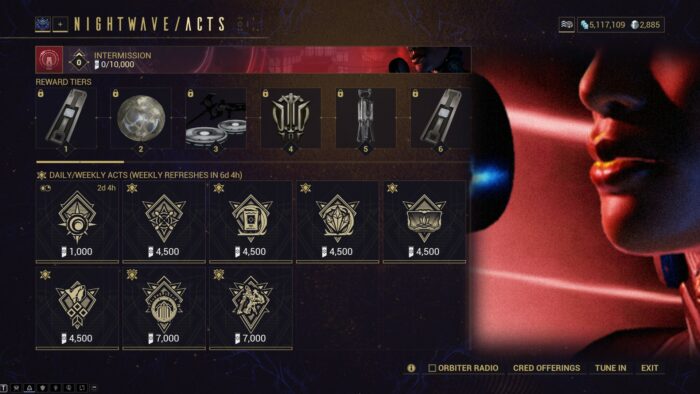 The Nightwave Intermission is back after one week of absolutely no way to farm Nitain Extracts, Orokin Catalysts or other items only available in the Nightwave shop. If you haven’t seen it yet or if you simply want to check what the rewards for the current Nightwave Intermission is, check our news with all the information you want and need. We currently have no idea on how long the intermission will be up, but with 30 ranks to clear we probably get ten to twelve weeks.

For this week, Digital Extremes started with a fairly hard Nightwave week, especially when we’re talking about the elite quests. If you are new to Warframe or Nightwave (or if you simply need to refresh your memory), feel free to read through our quick Nightwave F.A.Q. or let us know your questions!

Completing three assassination missions shouldn’t be a problem to anyone. We recommend either doing a mission you already have to finish in order to farm for the Warframe blueprints dropped by a boss enemy of your choice – or simply head to Iliad (Phobos) and quickly kill The Sergeant, who is the easiest assassination target in the game. You could of course do whatever you want and like since this quest is super easy and fast to finish.

Head to Cetus, talk to Konzu and accept a bounty. You need to finish five different bounties, which means that you can’t repeat the same one over and over again. However, you can simply wait until the bounties rotated and pick the ‘same but new’ one – if you’re having trouble clearing the last two bounty mission you don’t have to fight your way through those. In regards of picking a good Warframe we suggest either bringing a good area-of-effect DPS like Mesa or Ember or bringing a supportive Warframe of your choice.

Mining usually feels very relaxing and somewhat boring. Equip your drill (or buy one from Old Man Suumbaat on Cetus if you don’t own one yet) and then simply head from one cave to another, farming every ore you encounter. Bringing an Ember or another area-of-effect DPS will quickly kill all random enemies spawning around you from time to time, and from there on out it’s all about RNG and luck.

This is one of those quests that can easily be ignored, especially if you have enough time to simply play a couple of times during the week. You’ll eventually get rare mod drops while doing bounty runs, assassination missions or just by doing Fissure missions. If you want to power farm for rare mods we recommend doing The Index – every mod dropped there is a guaranteed rare mod and you already have to farm the mission for the elite quest.

Doing one Sortie should be fairly easy. Head into the mission, join a random team and try to be as useful as possible. If you never done a Sorties run before or if you need to refresh your memory we recommend reading through our Sorties Guide. There are some special conditions that can heavily influence and change the gameplay, so keep an eye out for that!

While this mission looks somewhat scary (especially to newer players), it can actually be done in a super easy way: Join the lowest Index mission, bring a Limbo and a point carrier (Rhino or Revenant are your best choices here) and then either fill your group with random members or just play with two bots. The plan is simple: Your Limbo keeps his ‘Cataclysm’ and ‘Stasis’ abilities up all the time while the point carrier finds and kills enemies, gather those points and caches them in once 15 points are accumulated. Repeat this for three matches and you’re done!

This is probably the hardest mission for most players and if you have no idea how to find the tier three Eidolon or how to do the Eidolon hunting, we recommend watching a YouTube video first and then join a noob-friendly group. Even though the fight itself might look overwhelming and complicated, it is just a mix of using your operator and understanding the different phases. Don’t worry if you fail from time to time, just keep on grinding and eventually you will get there!