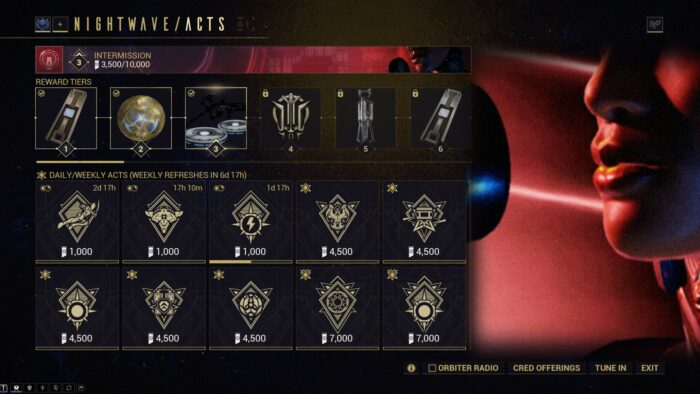 With the current Nightwave Intermission you’ll be able to get a few rewards from the past, so if you weren’t able to fully participate in Nightwave Season 1, now is your time to get your hands on cosmetics, mods and more. While last week was already a good start into the second Intermission, this week brings a lot of somewhat difficult and time consuming tasks. If you weren’t able to do last week’s missions you’ll be able to get those back once you are done with this week’s quests.

In case you didn’t know that or if you simply need a short refresher on Nightwave, we recommend reading our F.A.Q. guide. If you are looking for some tips and tricks for the current tasks, keep on reading!

This one can be super easy if you simply have three unsocketed Ayatan Sculptures in your inventory. If you currently have zero you need to start farming for those. You do get a guaranteed sculpture by doing the weekly treasure hunt for Maroo on Maroo’s Bazaar (Mars), while the easiest way to farm the other two sculptures is either Sorties or running Arbitrations. You might get lucky and find some Ayatan Sculptures in random missions, but that’s not a very efficient way to farm those.

This mission is fairly easy if you find a dedicated four-man-team, so keep looking for that in the recruitment chat. In the end it doesn’t really matter what Sabotage mission you pick, because as long as you know that mission well you will be able to find those three caches fast. A lot of veteran players prefer Stribog (Void) while newer player usually just go to Cervantes (Earth). Again, pick whatever you know best or whatever your group can do. Don’t forget to turn your volume up and your music down because all caches emit a sound when you get near.

Killing 500 enemies isn’t something you usually need to focus on. Eventually simply by playing Warframe you’ll be able to finish this quest. However, if you really want to focus on this quest, we recommend doing a (Elite) Sanctuary Onslought run. Pick an area-of-effect DPS (e.g. Saryn or Equinox) and you should be able to kill 500 enemies in a matter of minutes. But again, you don’t really need to focus on this task and simply do all the other quests first – eventually you’ll kill enough mobs.

While this mission shouldn’t be a problem for anyone, you usually want to combine it with either a Sorties run or simply doing relic openings. That way you don’t ‘waste’ a lot of time doing only random Mobile Defense missions, but you also get an extra reward out of that. So we really recommend checking all Fissure missions first.

Combining this quest with the above mission is a great way to streamline your time and to be as efficient as possible. Doesn’t matter what relic you open or what difficulty you are choosing, just make sure to be as well equipped as needed or use this time to level up some weapons or Warframes.

Finding four different Halls of Ascension trials can already be problematic if you don’t know what to look out for. Solving those puzzles is even harder without knowing how to do it. We highly recommend reading through our Lua Halls of Ascension guide, which gives you more than enough details on all the different trials, how to start and finish those and everything in between. Also, you should be able to find a dedicated group without any problem during the week, so use the recruitment chat and find three other people going into the Lua missions.

Similar to the ‘Not a Warning Shot’ mission from above, you don’t really need to focus on killing enemies. Just play the game and work on all the other quests first. If you don’t have a lot of time to play during this week or if you simply want to work on the ‘Kill Shot’ quest first, go into the (Elite) Sanctuary Onslought with a good DPS Warframe and you should be able to finish this mission in just a few minutes.