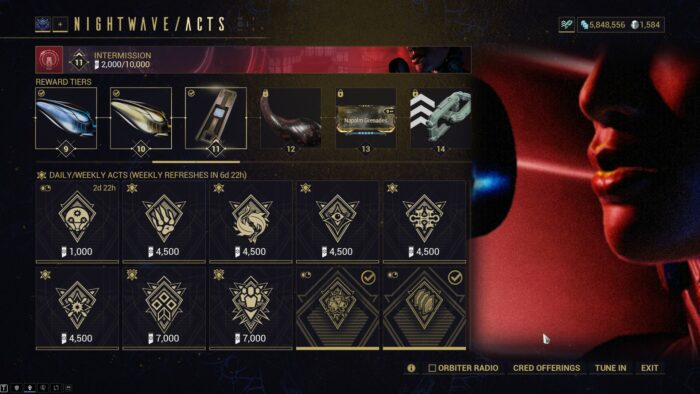 Another week has passed and Nora is back with another pile of new quests. While the missions are fairly easy to understand and solve, this week doesn’t allow you to simply finish everything in just one session. So if you’re a player that can’t log-in every day you really want to focus on quests that need to be done over a couple of days rather than on the other tasks. But even if you don’t have the time to log-in multiple times a week you can simply wait until a later week and recover all the quests you couldn’t finish in time. For example, you could start working on all the quests from last week if you missed those!

We also recommend to read through our small F.A.Q. guide if you’re new to the game or if you simply want to learn a few basic facts about Nightwave. As usual, this guide will give you a few tips and tricks on how to be as efficient as possible while working on your Nightwave Intermission II – Week 4 tasks.

If you’ve never done a Conservation run this might seem like a lot to learn, but if you dive into the basics of conserving the fauna on the Orb Vallis, you’ll eventually finish this mission in a matter of minutes. We highly recommend reading our Conservation Guide if you’re looking for some information on all that, otherwise just head out to the frozen tundra, bring your Tranq Rifle and make sure to be fast, precise and silent.

Honestly, catching six rare fishes is just a matter of minutes: Bring some bait, the right fishing rod and make sure to fish at the right place. That’s basically it. Be patient and wait until rare fishes start to spawn, because catching a lot of common and uncommon fishes somehow reduces the chance for rare spawns – so just wait a few seconds and you should be good to go!

Spy missions are often a problem for newer players, either because they don’t know the maps and secret shortcuts or because they don’t own any invisible Warframes like Loki or an Ivara with a specialized spy build. If you’re one of those players, pick just one spy mission, go in solo and try to beat it three times. It might be a little bit more time consuming than joining random groups, but you eventually need to learn Spy missions. So why not use the heat of the moment to actually learn a node?

Well, there isn’t a lot to say about this task. Find a weapon, companion or Warframe you want to use more often, put in a Forma and you’re done. This really is the easiest mission and requires about 30 seconds of your time.

To be as efficient as possible we recommend combining running Saboteur missions with doing either a Sorties run, opening Fissure relics or working on your Kuva Lich. That way it doesn’t feel like you’re wasting your time just doing random Sabotage runs for Nightwave. But in the end, it probably takes only two to three minutes each time you’re doing such a mission, so you only invest ten to 15 minutes.

This quest is the main reason why you won’t be able to finish this week’s Nightwave in just one sitting. You actually need to log-in three times during the week and finish the Sorties of the day, otherwise you won’t be able to get the standing. Sorties are also a good way to work on your Spy and/or Sabotage quest, so keep that in mind. You could actually focus on Sorties first and ignore those other quests until you’re done with that. If you want to know more about Sorties in general, hop over to our Sorties Guide!

Even though this is an elite mission, you don’t really have to think all that hard about it. 30 minutes of survival is fairly easy to do, even if you’re solo. Bring a Nekros or a Khora if you’re looking for a few extra drops. You can also easily find a four-man-group during the week, so check the recruitment chat if you don’t want to join a random group and/or if you’re not into solo play.