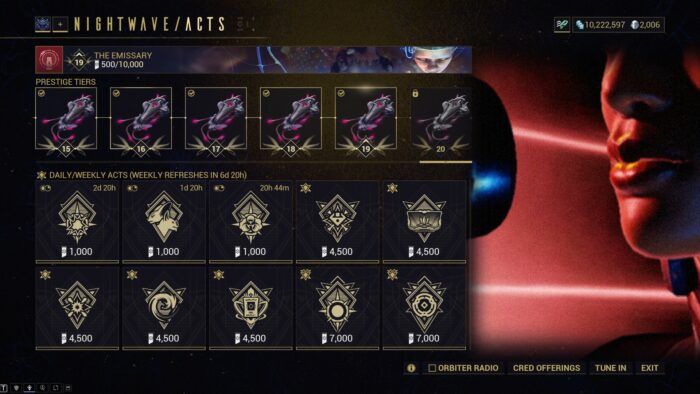 Here we are, already at week 12 in the second season of Nightwave. This week brings you again very easy-to-do quests, even easier than last week’s Nightwave. It also seems that Digital Extremes is still working on the balancing of each mission and is steadily reducing the requirements to solve them. Which is totally okay, especially since it makes Nightwave more accessible for players that simply don’t have enough time to play on a daily basis.

As usual we want to note that we do have a Nightwave F.A.Q., which answers all the important questions you have about the game mode. So head over to that guide if you are new or simply want to read through the most basic questions.

Doing three Exterminate mission shouldn’t be a challenge to anybody. If you want to be as efficient as possible try to combine this quest with running some Fissure missions (don’t forget that Baro Ki’Teer is coming again on Friday!), Infested Outbreak missions or with doing the daily Sortie run. Of course you could also just rush through Mariana (Earth) three times in a row and be done with it. It is totally up to you how you earn these 4.500 standing points.

If you play a lot of Warframe during the week, you’ll eventually get enough rare mods. If you don’t have a lot of time on your hands to wait for random rare mod drops, head over to The Index and do some runs there. Doesn’t matter if you’re going in solo or with a group, because even on the lower investment levels every mod that drops is guaranteed to be a rare mod.

This is basically the same reasoning we used above for the Exterminate missions, but here we are doing Sabotage. So again, do Fissure, Infested Outbreak or Sortie runs if you want to be efficient with your time. Or just rush through any low level Sabotage mission three times and be done. There aren’t a lot of tips and tricks here, so even new players will be able to solve this quest without any trouble.

Three Nightmare missions are super easy to do, because with the daily reset every planet will get one. So there are a lot of daily Nightmare missions already and you simply can pick the three nodes you are able to solve. Make sure to read the conditions first and equip Warframes and weapons based on that, but otherwise you should be able to handle everything the game is going to throw at you.

You probably already are farming Venus bounties over and over to get your hands on all the relics needed to farm for the unvaulted Saryn Prime and Valkyr Prime. So just keep doing that. If you’re not farming for those, just head into Fortuna and start doing bounties. There isn’t really a secret to success here, but area-of-effect damage is super strong on the Orb Vallis. So think about using something like Mesa or Ember.

Killing 1.500 enemies might sound like a lot, but one or two runs through Elite Sanctuary Onslaught (or the normal version of the game mode) will give you enough kills. Or simply work on all your other quests first and eventually you’ll hit the threshold without actively farming for it.

This is probably the hardest quest of this week’s Nightwave, but it still isn’t problematic. Sorties might be your friend and if you already are doing these on a more or less daily basis you’ll eventually find yourself in a high level Exterminate mission. You could also wait for an Axi Exterminate mission to pop up – or just try your luck on Sedna, Eris or Pluto. If you’re doing a solo run, bringing invisible Warframes like Loki or Ivara sounds like a good idea, otherwise think about bringing some sort of crowd control to make sure there won’t be an activation of the alarm.