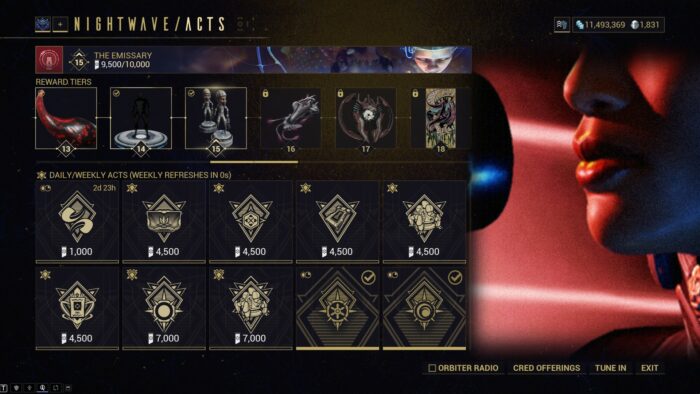 This week’s Nightwave quests do bring a lot of different things to work on. Especially the Elite Weekly Quests could be somewhat annoying and troublesome for players, but there are some ways to make this easier. Daily quests are not included in this guide, but usually don’t need any explanation. If you do have some more general questions about Nightwave, head over to our ‘Quick F.A.Q’ guide!

If you are looking for some help with the weekly quests you came to the right place. Even though some of this week’s quests are super easy to do or don’t need a lot of explaining, we’re going to give you more than enough tips and tricks for you to quickly go through the missions and then go back to more grinding – you probably still have a lot of stuff to grind for the ‘Dogs Days’ tactical alert!

Enhance is pretty easy to do and shouldn’t take more than 15 minutes if you really want to farm for that. You could either just keep on playing and eventually get rare mods simply by doing other missions. Or you could jump into The Index and kill enemies there. Every mod drop from The Index is a rare drop, so it is the best place to farm for that – as long as you don’t care what rare mod it is.

There shouldn’t be any explanation needed for the Jailer quest. If you want to combine it with something useful, jump into Void capture missions to get a chance for the vaulted relics or simply wait until a fissure mission with capture targets pops up.

To finish ‘Now Boarding’ you need to finish three different K-Drive races in Orb Vallis. Finding those could be somewhat annoying, especially if you don’t have a Archwing Launcher. There will be five K-Drive races on the map (out of 22 possible locations) and all you can do is fly (or run) from potential spawning point to the next. There is a really nice map on Reddit with the locations, so follow these and you should be able to finish this quest in no time.

Finding a Tusk Thumper is easy: Just do a bounty run on the Plains of Eidolon and the war machine will show up exactly when you don’t want it to. Otherwise just head into the free-roam map and fly around with your Archwing until you’ve found it. If you don’t know how to kill it, head over to our Tusk Thumper guide. Don’t forget that they only spawn during day time.

Another weekly quest that doesn’t require a lot of explanation. If you are having trouble doing the higher level bounties, bring a good area-of-effect DPS-Warframe (Mesa or Equinox are great choices) or simply hope to find a good group that will help you out.