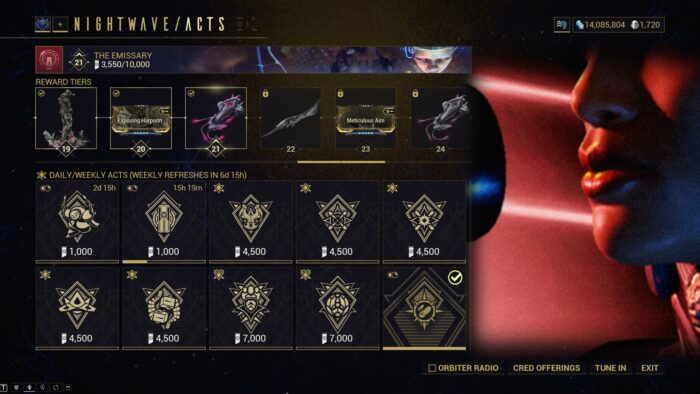 A new week, a new bunch of Nightwave quests: This week really does feel harder than last weeks Nightwave quests, especially for people that usually don’t farm for more lategame oriented missions. The Elite Weekly Quests are very easy to solve, while the ‘normal’ weekly quests are harder to do. We didn’t include daily quests again, because – well, they are daily. You should also be able to solve them without any trouble. If you still have some more general questions about Nightwave, head over to our ‘Quick F.A.Q.’ guide!

We will try our best to give you some tips and tricks on how to solve this week’s Nightwave quests. But even if you can’t solve all the quests for now, don’t worry about it: You will still be able to recover these missions in the next few weeks and get the standing points later on.

This one can be a little bit tricky if you don’t have enough Ayatan Sculptures in your inventory. You can get one of the three statues simply by doing the weekly Ayatan Hunt on Maroo’s Bazaar (Mars). So head over, do the mission and you’re already 33% done. If you need more you have several options: You could buy them from other players, since most Ayatan Sculptures can be traded. If you have access to all planets and nodes you can also just jump into Arbitration missions and try to get them as a rewards from there. They have a good chance to drop. There is also a chance to get Anasa Ayatan as a Sortie reward, so do the Sortie run every day and try to get lucky. And of course there is always the (small) chance to simply find a random Ayatan Sculpture in any given regular mission.

This weekly quest should be fairly easy to do, with The Sergeant on Iliad (Phobos) being the easiest target in the game – you can learn more about him in our How To Get Mag guide. But you can pick whatever assassination target you want (Jackal on Venus is also super easy) and just run that mission three times. We recommend doing either a boss you already know or try doing a boss fight you have to do eventually to get the Warframe blueprints you need. Honestly, just do whatever you want and like!

Again, do whatever you like to solve this mission. There is no right or wrong choice and it doesn’t matter if you run a Saboteur mission on Earth, Sedna or on the Orokin Void. You can always try and combine the runs with whatever resource you are trying to farm: For example, if you need some Orokin Cells it would be wise to do Calpyso (Saturn), Enceladus (Saturn), Ker (Ceres), Thon (Ceres) or the Orokin Derelict Sabotage mission. They all have a chance to randomly give you Orokin Cell deposits and are therefor a good choice.

This mission can be more annoying and ‘harder’ to do, simply because you need to finish five scans for Cephalon Simaris. Since you only get between two to four scan targets per day you you won’t be able to do this mission just in one day. Don’t worry if you don’t have the time right now, because you can simply ignore the quest and recover it in the next weeks – just make sure to finish it before Season 2 ends. Our pro tip for the scanning part: Bring an invisibility Warframe (our top pick here is Ivara, but Loki, Ash or even Octavia can be fine as well) and search for the scan targets. As long as you stay invisible you can scan them without them running away and without the need to trap them. Also take a look at this Steam guide for the best missions to find a certain target.

This mission should be pretty easy to do: Head to Fortuna, buy some bait and then run out into the Orb Vallis to fish for. Personally we love to fish for Longwinders during warm weather, simply because they will spawn plenty in the small pond right behind the elevator entrance. But you can fish for whatever you want. Another great thing about Orb Vallis is that there is a chance for rare fish spawns even if you don’t have the bait. We do have some decent success without bait with fishing in one of the cave ponds. But bringing bait (and waiting for the right weather) will make the mission super easy – you should be done within five minutes at most.

You can either try and find a group in a recruitment chat or solo this mission by bringing a good area-of-effect DPS. Saryn, Mesa, Volt or Equinox are great picks. If you really want to be efficient, pick a mission that is either a Fissure version right now (to open some relics and to farm some void traces) or that drops the resources you need for your next Warframe, weapon or equipment. Or maybe you’ll get lucky and you find a combination of both these advantages.

Well, there isn’t really a lot of explaining to do here. You can combine it with the ‘Defense’ mission. Or with the ‘Saboteur’ mission. But you don’t have to, because opening ten relics can be as easy as running ten Fissure capture missions, which are doable in less than two minutes. So you can finish this ‘elite’ weekly quest in less than 20 minutes. Easy peasy.