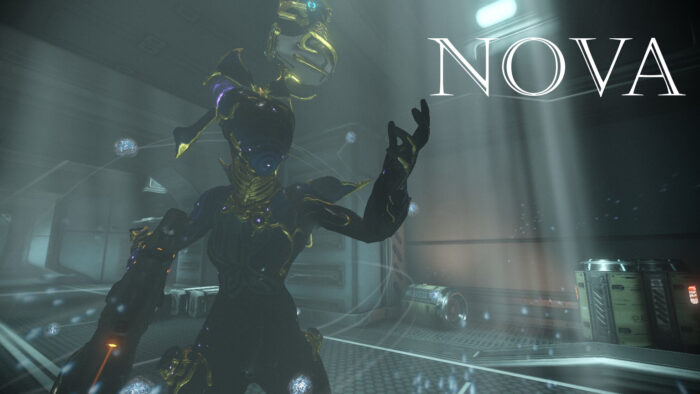 Nova Prime was released in December 2014 and quickly became one of the most important Warframes in the game.

Her unique ability to either slow the enemies by a lot or to speed them up is really important in a lot of farm-setups.

Thanks to Plains of Eidolon she is also often used because of her third ability Worm Hole, which makes her teleport through space, leaving behind a worm hole for her teammates. This allows the group to quickly travel through the plains and saves a lot of time.

She is fairly easy to farm, doesn’t need a lot of forma to work and doesn’t require a lot of game knowledge to fulfill her job. She is the perfect Warframe for beginners as well for experienced players.

No matter what you try to achieve with your Nova/Nova Prime, using Energy Siphon or Corrosive Projection is usually the right choice.

You also almost always want to use Primed Flow and Primed Continuity, locking up two slots in every build.

Just start from there on out and think about what you want to achieve and how to get there.

If you want to find a solid blueprint of different builds you came to the right place!

Tip: If you want to know more about Nova and her abilities, feel free to take a look at the wikia page! 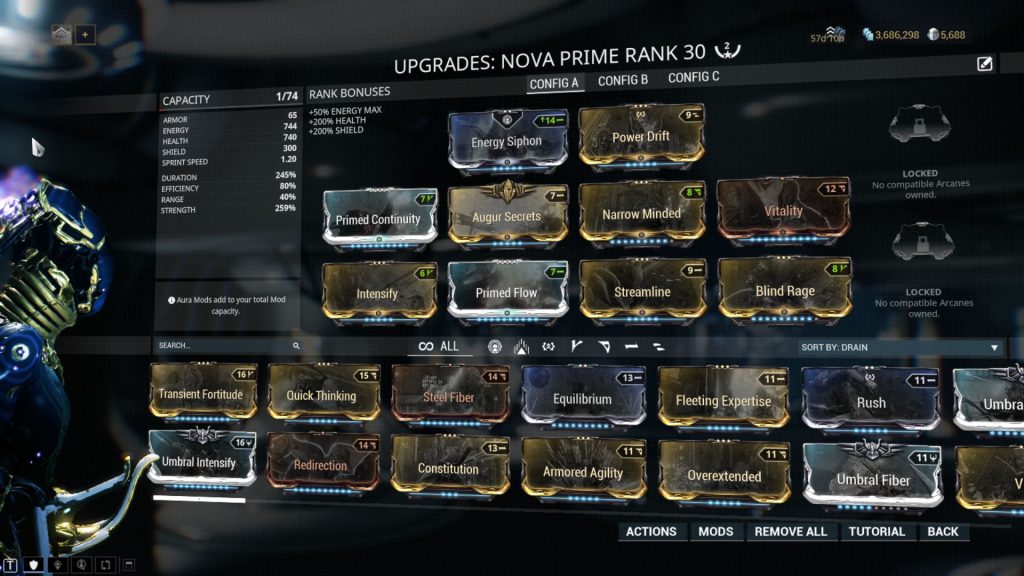 This build revolves around your forth ability Molecular Prime, which will slow your enemies up to 75% and once you kill them they explode and deal additional damage to all surrounding mobs.

This is super strong in all mission types that doesn’t really require you to kill a lot of mobs – good examples are Interception, Rescue, Excavation, Mobile Defense, Capture, Assassination, and so on.

Depending on your team and your strategy it could also be viable in Sanctuary Onslought. Just make sure you stack a lot of strength in order to get the maximum amount of slow and combine it with a long duration.

The longer the duration, the bigger the area of effect. Vitality helps you stay alive, while Streamline helps a bit with energy problems.

If you do have a team with an EV Trinity in it, feel free to switch out Streamline for Constitution or another survival mod like Redirection.

If you don’t play in a premade team with an EV Trinity, you probably want to add some Squad Energy Restore (Large) to your inventory and pop them whenever you and your team need more energy. 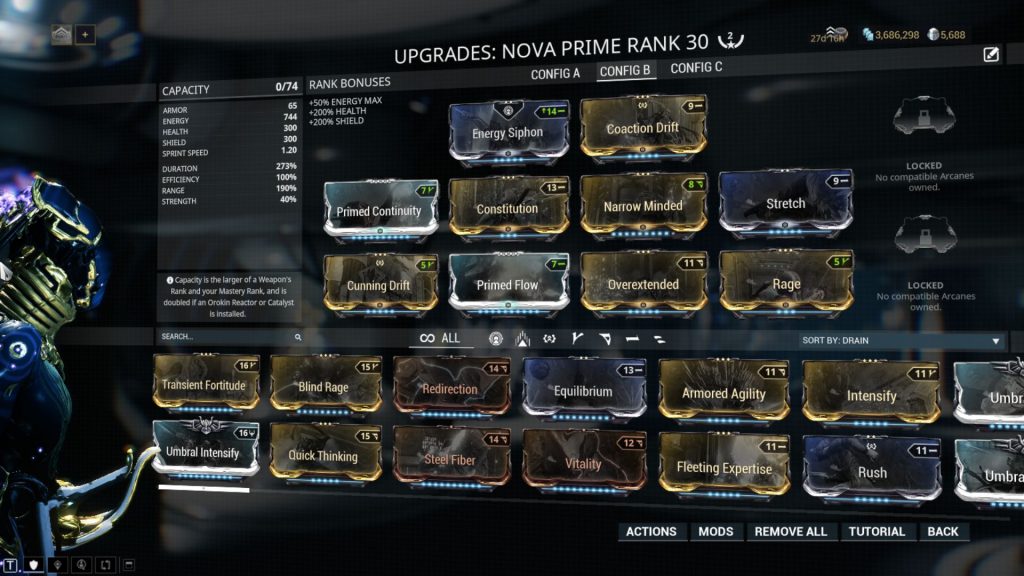 This build is basically the same, but here you need a negative amount of strength.

Overextended is the key to a Speed Nova, because the reduced amount of ability strength will speed up all enemies in range.

Now all you have to do is stack a lot of duration and ability range and you get a great area of effect.

Coacation Drift is by no means an inevitability and if you want to invest more Forma, you can simply switch your Cunning Drift into the Exilus slot and put in something like Streamline, Vitality or Augur Reach.

Since speeding up the enemy is always a dangerous game you should make sure that you do have a good group or at least a solid weapon to kill them fast enough.

The Speed Nova build is perfect for missions where killing enemies as fast as possible is your main goal – so pick her for Defense (so you don’t have to wait too long for the mobs to come closer) or Survival (so you can kill more enemies in a short amount of time, which will give you more loot, more experience and more personal life support modules).

Depending on your team and your strategy it could also be a viable strategy in Sanctuary Onslought.

This build allows you to have a bit more efficiency, but you probably need an EV Trinity or some Squad Energy Restore (Large) in your inventory, especially if you plan to stay longer.

Since this build doesn’t use any survival mods, make sure to always run and jump around to avoid getting killed easily.

Unless of course there is a Frost or some similar Warframe in your group. 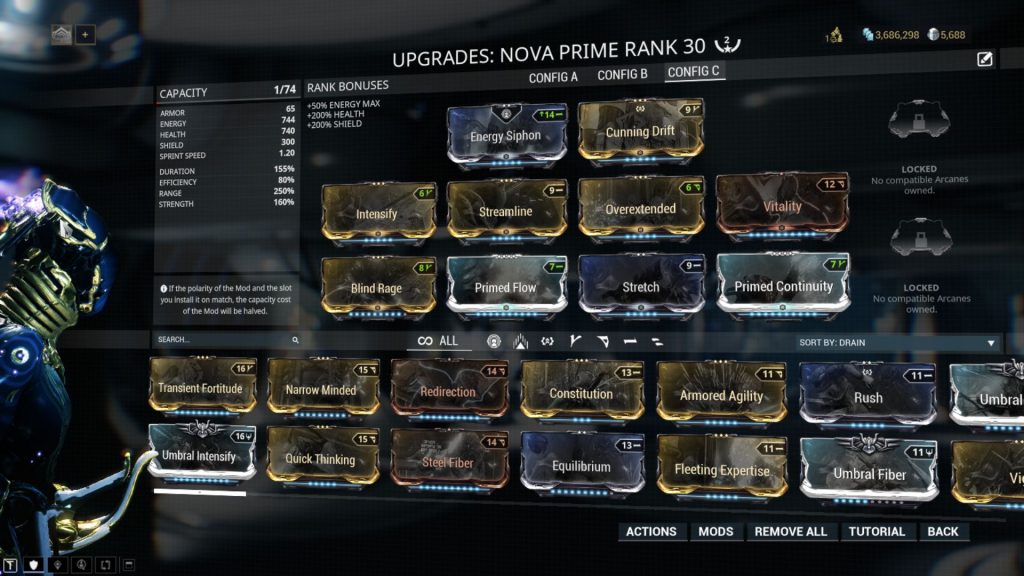 This build focuses simply on your ability to travel a wide distance in a short amount of time – abusing the power of your Worm Hole.

You can use it in rescue missions as well, but you will mainly put it to use during a bounty hunt on the Plains of Eidolon.

You can quickly get from one point to another and help your team out, because they can use your Worm Holes after you put them out there.

This build uses some duration and ability strength in order to not be super useless when you are doing some fighting and allows you to use your ultimate ability so slow your enemies down.

It isn’t as good as the Slow Nova build, but will still do a decent amount of work.

Nova is one of the core Warframes in the game and if you want to start to seriously farm for relics, experience, mods or different resources, you should probably aim to build Nova as fast as possible.

She is easy to get, easy to play and with one or two Forma you do get a really strong Warframe, even if you don’t have all the mods needed. Just try to understand the main concept of her and build accordingly!