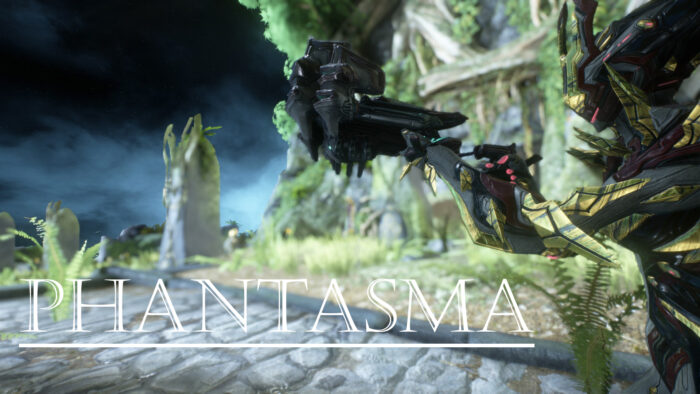 Even though the Phantasma looks like a shotgun (and uses shotgun mods), the weapon itself doesn’t play like your standard version of a shotgun.

Instead of shooting a few pallets with every shot the weapon uses a steady beam which deals innate Radiation and Impact damage.

The signature weapon of Revenant also brings an alternate fire mode with exploding plasma bombs with the possibility to charge those bomb-shots, dealing more damage the more you charged them.

Getting your hands on the unique weapon is also fairly easy, because you simply buy the blueprint from the ingame market for 25.000 Credits.

Getting Argon Crystals (from Void missions) or the Intact Sentient Cores (dropped by Eidolon Vomalysts on the Plains of Eidolon) might involve some amount of grinding, but getting all resources needed to craft the Phantasma should be a matter of minutes and not hours.

If you’re looking for some ideas on how to build the shotgun, keep on reading!

With the fairly low critical multiplier and an already low critical chance you really don’t want to build the Phantasma around critical damage.

Instead you almost always want to build for full (100%) status chance to get a lot of status damage procs.

Don’t forget that the shotgun also has infinite Punch Through against bodies while using the primary fire mode, which allows you to still hit enemies in the back line.

Sadly, while the second fire mode is a lot of fun to use, there is a fairly high chance that you will kill yourself using those plasma bombs.

Using Cautious Shot would be a great way to reduce the incoming self-damage, but for some reason you can’t use the mod with the Phantasma.

So be very careful while shooting plasma bombs at your enemies.

There shouldn’t be much confusion on what mods to pick for this build. You need at least three +60% status chance mods to reach 100% status chance, so pick those accordingly to the status damage you want to bring into your missions.

We personally recommend either Corrosive or Viral damage (and use the innate Radiation damage as well), but you can obviously pick whatever you need and like.

Primed Charged Shell increases your damage output quite a bit, but if you don’t have the primed mod use any of the four elemental mods.

As for the exilus slot, we do like Shell Compression the most, simply because the low magazine size is fairly annoying. But you can bring whatever you enjoy the most.

As mentioned a few times before, this fire mode allows you to shoot plasma bombs that explode on impact, dealing heavy area-of-effect damage to everything and everyone in range – including your own Warframe.

So make sure to keep your distance and learn how to aim those special bombs.

The build itself seems fairly similar to the primary fire mode build, but we highly recommend trying out Blast damage here.

Since you can easily get 100% status chance (again, three +60% status chance mods are enough), picking Blast damage guarantees a proc with every shot, which brings some crowd control into your game.

As for your exilus slot, we use Fatal Acceleration to increase the damage per second a bit.

Other than that you really want to add some multishot to increase your damage output and to give yourself a chance to drop multiple bombs with just one shot.

The Phantasma is a decent shotgun with a unique way to play the game. The ability to shoot a steady beam with a shotgun weapon is actually quite fun.

And by pressing one button and changing the fire mode you get the ability to drop huge plasma bombs on groups of enemies, killing them with just one blow.

Just make sure to stay out of the explosion radius and you should be good to go!

If you think we’ve missed some important information or if you want to add your own builds, feel free to leave us a comment down below.