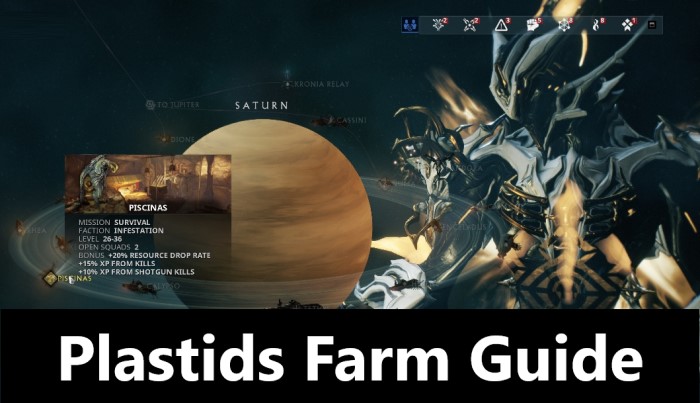 Plastids are nanite-infested tissue masses and are quite rare in the game. Even though the description sounds gross, you need plastics to make weapons and also components.

They can be farmed from enemies on various planets. They might drop from the enemies you kill on missions, and they can also be achieved by looting lockers or destroying containers.

They are relatively easy to farm and come in large numbers, especially if you are bringing farming warframes along.

Camping is the best method, and roaming around in survival missions can also lead you to them.

Where To Farm Plastids in Warframe?

Right now there are five planets offering missions where you are able to farm for Plastids.

These planets are following:

You might have to progress some more before you can do these missions, since they can’t be done early in the game.

There is a chance to get plenty of Plastids doing Dark Sector missions on those planets.

You can pick them or use a squad to get even more. Eris and Uranus are especially good for farming Plastids.

Let’s take a look at the best locations to farm plastids in Warframe.

You can get other resources like Gallium, Detonite Ampule and Polymer Bundle from here, as well as Plastids.

Enemies are a moderate level, especially bearing in mind you’re going against the infested, so most players won’t have any issues.

Uranus gives you 25% more drop chance, which is higher than a lot of other planets.

Having a higher drop rate and a moderate level make Uranus, or Assur, one of the most popular Plastid farming areas to visit.

The 30% increase in drop rate is impactful when you combine it with warframes designed to farm.

However, it’s possible that the enemy levels might be too high for some players, and this can slow down your farming.

This makes them easier to kill, as long as you are armed with good weapons, a squad to farm Plastids with or a strong warframe.

This is one of the game’s legacy farming locations and worthwhile if you would rather do a defense mission instead of a survival one.

You can get Plastids at a good rate and teams can farm plentifully by doing multiple rotations. It isn’t hard to set up farming warframe abilities like Khora or Hydroid.

Nekros can increase drops more for all the squad, so bring in a large squad to increase how many enemies spawn in every wave.

Piscinas on Saturn is a nice location for Plastids farming. The enemies are low level plus you are set up with various resources.

There is a Dark Sector bonus at Piscinas giving you a 20% increase in drop rate. This is pretty good for casual farming.

There are a number of areas on the map for you to camp and enemies are simple to kill there.

As well as Plastids, you can farm for Orokin cells on Saturn. These are pretty rare and worth having.

If you want a mission that’s easy to complete and comes with low enemy levels to allow looting, you might like to pick Ara.

There is a great chance of getting plenty of Plastids and it’s simple compared to some other missions. Assure and Ophelia are good missions if you want to successfully farm Plastids and get extra resources too.

Try to do survival missions along with other players. Ara is easy enough to do solo but consider getting some help for the others.

This will increase how many enemies you encounter, which in turn increases how many Plastids you can get.