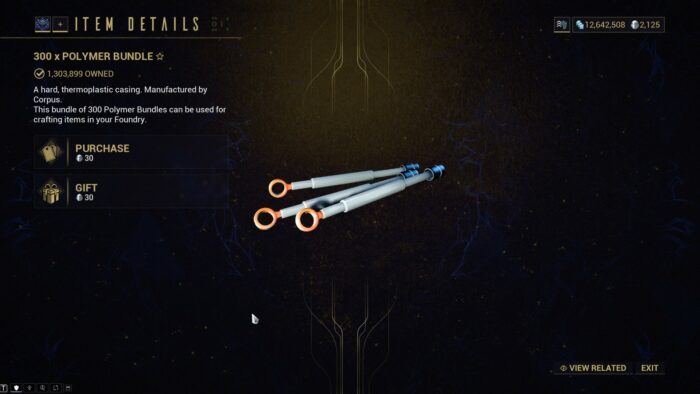 The uncommon resource Polymer Bundle is heavily used throughout the game and you eventually will get to a point where you need start farming for the material.

Especially if you do use a lot of Squad Energy Restores during Eidolon farming or in other missions you’ll quickly use up all your Polymer Bundle reserves.

Even though you can theoretically buy it for Platinum in the market, you should never get it that way. If you really want to spend some premium currency, go ahead and buy yourself a resource booster (plus a resource drop chance booster) instead.

The best way to get a lot of Polymer Bundles is simply farming for it: Either try the recruitment chat, your clan or go into the missions solo and bring a good farming composition (if possible).

There are however some Warframes and missions that are more suited for a farming adventure. This guide will tell you exactly where you can find those missions, what you should look out for and what else you need to worry about.

Where to farm polymer bundle? As an uncommon resource, Polymer Bundle will be drop on Mercury, Venus and Uranus.

So theoretically it doesn’t matter which mission you pick, you will eventually get a good amount everywhere.

There are however a few missions that will yield a higher amount or have other benefits.

Here are our top choices:

The Infested survival mission features a high concentration of enemies, small corridors and rooms together with the fact that Uranus missions will also yield Plastids.

So you can easily farm for both the needed resources without switching missions.

Even though you will get significantly less Polymer Bundles doing missions on Orb Vallis, running the bounties multiple times can be very efficient.

You will increase your standing with Solaris United, get a lot of other resources as well as relics and more.

So if you don’t need to get a lot of Polymer Bundle right at that moment, but rather need more in general, consider doing bounty runs on Fortuna instead.

The same logic we used for Assur applies here, too.

The Infested do spawn in a higher density and even though the chances for Polymer Bundle are higher on Uranus, you will still get a decent amount on this node.

You should play here if you either don’t have made your way to Uranus yet or if you simply can’t survive long enough in the higher level missions.

Of course you can always use any other (endless) mission on Uranus and still get a (very) good result. But using one of the methods above will yield the best results, always depending on your situation and of course on your group composition.

You really want to bring the best equipment for the job to get a high amount of Polymer Bundle in a short amount of time.

The best group composition for Polymer Bundle farming is the same as in every other resource farming group: Bring a Nekros or a Khora, a dedicated support, a dedicated DPS (that works well with all your other Warframes) and combine all that with some kind of utility or crowd control.

Of course you won’t always find a farming group and therefor you do need to do some sort of solo farming – either joining a random group with your Nekros or going into a mission alone and farming until the enemies get too strong.

Experience shows that Khora is a pretty great pick for those kind of missions, especially (but not exclusively) against the Infested.

You can pretty easily solo a lot of endless mission and proceed through the content without any trouble.

Bringing a hybrid version of Nekros or a high duration/efficiency Hydroid are also good choices for the solo mode.

Even though you will mostly get your Polymer Bundles as a random drop from killing enemies there are a few different ways to get some extra loot.

We are mentioning them to give you a complete overview of all the possible rewards, not because they are a great way to farm specifically for Polymer Bundles.

Here are other drop locations:

Again, even though the mission above do have a chance to give some Polymer Bundles as a reward, farming them purely for the resource is a waste of your time.

But if you already plan on doing the missions for whatever reason (e.g. because you need to finish Sabotage or Exterminate missions for Nightwave), then doing those might be a good idea.

Even though Polymer Bundle is ‘only’ an uncommon resource, you will eventually start farming for it.

But don’t worry, because there are some great missions to pick from and especially if you manage to find yourself in a dedicated farming group (and use a Resource Booster and a Resource Drop Chance Booster) you should be able to quickly accumulate a lot of Polymer Bundles.

The most important improvement for your resource farming will be the usage of a farmer Warframe (Nekros, Khora, Hydroid), so get started on farming those first!

If you do have some important information to share or if simply want to ask a question, don’t hesitate to leave us a comment.