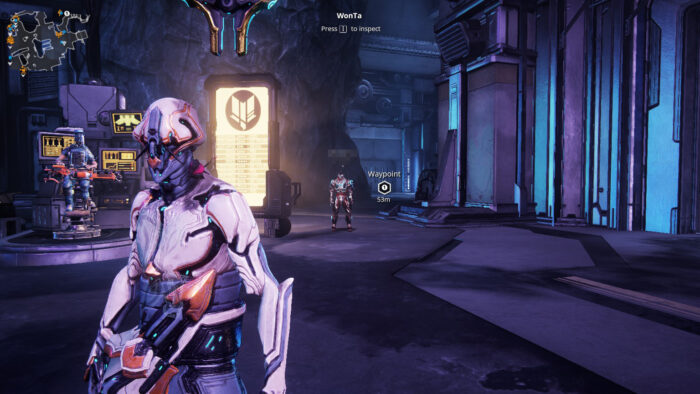 Taking down the Profit-Taker Orb during four different missions is the goal of the heists, introduced with update 24.2 and is very important if you not only want to raise your standing with Vox Solaris, but also gain access to Baruuk and other new stuff.

To gain access to those missions you first need to play through The War Within and also gain the highest rank (‘Old Mate’) with Solaris United.

If you’re still grinding through the daily standing farm, you might want to take a look at our Solaris United Guide to minimize the time needed and to become as efficient as possible.

Once you have all the requirements, simply go to the backroom on Fortuna (on the right side behind Eudico) and start the missions by going to the mission table.

You will be able to start the first heist (‘Phase 1’) and progress through the missions until you’re finally able to take down this Profit-Taker Orb.

Oh, and this walkthrough is full of spoilers regarding the upcoming heists, so don’t read further if you want to experience everything on your own!

Eudico will tell you about the Profit-Taker Orb and explain the reasoning while it’s finally the time to take it down.

You’ll get some additional information from Biz, Little Duck and Eudico before you are sent out to the Orb Vallis to meet with a Quill that does offer satellite protocols.

Those will help in turning off the currently impenetrable shields of the Profit-Taker Orb. So head to the elevator and get out on the field.

What you need to do in order to finish this phase:

Best Warframes and Weapons for Phase 1

If you manage to get a group, it doesn’t really matter what you bring as long as you can survive and deal some amount of damage.

The enemies are pretty tough and will be at least level 45+ and you should also expect some stronger ‘mini boss’ types out there.

Some great Warframes to bring for phase 1 are:

Of course there a lot of other viable Warframes in the game and you can always just bring the Warframe you feel most comfortable with. Just make sure that your chosen Warframe will be able to survive against higher level enemies.

Picking the right weapon will also help you out a lot, because some of the enemies have nullifier bubbles, some will fly or jump around and other enemies simply have a huge amount of health and shield.

So bringing a Amprex, a good shotgun or a Arca Plasmor is a good idea.

The second phase starts right after you talked with Little Duck outside of the elevator.

If you want to start the phase later on, you can simply go back to the backroom inside of Fortuna (where you started the first heist mission) and go on from there.

Here is what you need to do in the second phase:

This mission is super short, which is also the reason why a lot of players use it to farm the different important rewards – namely Gyromag Systems, Atmo Systems and Repeller Systems.

The three directors always spawn on the same spots, so if you manage to get yourself a 4-man-team, each member kills one director, while the fourth player waits outside, kills the Ambulas and grabs the data mass.

This will result in a mission time of only two minutes, making it a super quick way to farm rewards!

Best Warframes and Weapons for Phase 2

This mission is centered around high health and damage targets and you should bring Warframes or weapons to kill those as soon and as fast as possible.

Otherwise, whatever you successfully during the first phase of the Profit-Taker heist, will also work here. Just make sure you’re able to survive everything the mission will throw at you and you’re good to go!

Here is what you need to do in phase 3:

In order to deal enough damage you need to have weapons with the right damage type.

The Profit-Taker Orb will display a symbol of the current damage type needed right above his head on the front.

So if you see a toxic damage symbol, use a weapon with toxic damage. Same is true for every other damage type in the game.

Best Warframes and Weapons for Phase 3

Getting the right loadout is somewhat tricky and if you are able to get a premade group, make sure to split all damage types.

If not, bring a good primary and a good secondary weapon of your choice (a good combination would be Vectis Prime (high puncture and good impact damage) and Akstiletto Prime (high impact damage)), but make sure to have different elemental damage types.

If you do have a weapon that can achieve full status then that might also be very helpful.

In terms of the best Warframe choice – bring whatever lets you survive the high amount of incoming damage. A Rhino or an Inaros might be good choices, but you can also just pick a Volt and CC every enemy while gaining overshields.

Another idea might be using Titania to fly around while evading shots from the ground.

Or simply get into your Archwing and use it to get a good distance between you and the Profit-Taker Orb.

Now you ‘simply’ need to head out, kill the Profit-Taker Orb and get back to Fortuna.

Sounds easy, but trust me – it isn’t. The Profit-Taker Orb fight is one of the toughest boss battles in the game and requires a good amount of preparation as well as an understanding of the different phases.

A guide for ‘Phase 4’ would be way too much to write for this guide – so we wrote a long and comprehensive guide about this fight alone! So if you want to know more details about the fight, the right weapons and Warframes and more…

Continue here to read How to Kill Profit Taker

The newest addition to the Fortuna expansion is fun-to-play and will present to you some very unique challenges.

Farming for rewards is very grindy and can become boring, but that’s Warframe for you and if you can’t handle the grind then…I don’t know, play another mission or something.

The heists itself are interesting, the story is great and fighting the Profit-Taker Orb at the end is not only tough, but also rewarding.

So head into the game, fight that big son of a bigger Profit-Taker Orb and have fun while doing so!