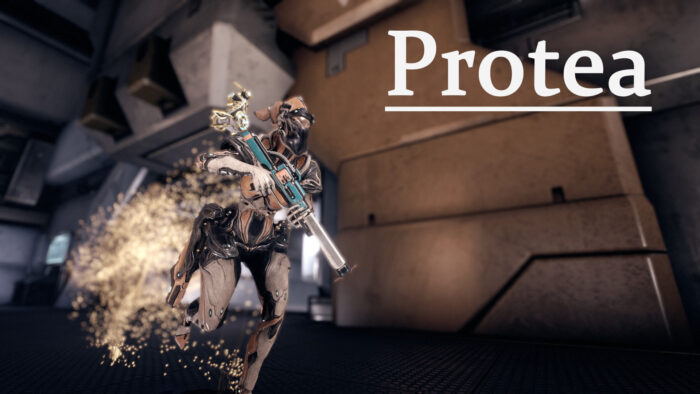 With the release of Update 28, Warframe finally got another toy to play with: Protea is a fairly versatile addition to the game that brings a little bit of support, a lot of damage (single target AND area-of-effect damage!) as well as some neat survivability for herself and her team mates.

While you will bring her mainly for her damage capabilities, you will find her whole skill set to be well rounded and simply a lot of fun to use.

Finding all the blueprints and actually crafting the 43rd Warframe might give you some work to do, especially if you’re not into Empyrean and Railjack missions or if you don’t know what the Granum Void is.

If you’re looking for a guide on how to get Protea, look no further and hop over to our guide! Otherwise, keep on reading for some ideas on how to build the Warframe.

Sadly, even though you might be able to use all of Protea’s skills in a mission, they are not similar useful. Especially ‘Temporal Anchor’ feels too weak to build around, because you have to deal damage first before the ability will deal even more damage – often leaving you without enemies to damage with the ability itself.

That said, Protea’s first three abilities are always useful and depending on your build you can easily carry your whole team through long endless missions.

Generally speaking, you might want to use a lower duration for missions where you can’t stand around (e.g. Rescue, Capture, etc.), while a longer ability duration is useful in endless missions. In regard to the aura mod slot you almost always either want to pick Energy Siphon or Corrosive Projection, depending on the mission and your team composition.

Tip: If you want to know more about Protea and her abilities, feel free to take a look at the wikia page.

This build tries to find a good middle-ground between damage output, survivability and utility. It allows you to use all four of your ability successfully and can easily be changed depending on the mission you’re planning to run.

You do want a lot of ability range, but using Overextended might be overkill. You might also choose to switch Vitality for Redirection to get more out of your Shield Satellites.

Your ‘weakest’ mod is probably Primed Flow, so if you find yourself not having energy problems with a lower energy pool, feel free to try out mods like Augur Secrets or Energy Conversion to get a little bit more ability strength.

You might also want to change Cunning Drift for Power Drift if you rather deal a little bit more damage.

‘Blaze Artillery’ is by far the best damage skill Protea has to offer, so building around it and maximizing the damage output seems like a great idea.

You want to max out on duration to give each summoned canon as much chance to deal damage as possible.

After that you want to focus on range and put ability damage third, because range is fairly important on open tile sets, especially if you’re running an endless mission.

Primed Flow helps a little bit, especially with your ‘Dispensary’ running all the time. But if you find yourself in a group with energy replenish (e.g. due to a Trinity), feel free to use something else.

We recommend either picking up Constitution for more ability duration or a survivability mod like Vitality or Redirection.

The lack of any survivability in this build might be a problem during longer runs, so make sure to change that according to your chosen missions.

Protea has a very unique skill set that is just a lot of fun to use: You can get something out of every ability and actually be useful.

Make sure to keep your third skill running, use your first skill to keep your shields up and go nuts on spamming your artillery units.

Don’t forget to post your own build in the comments if you think you’ve found another way to play with Protea!