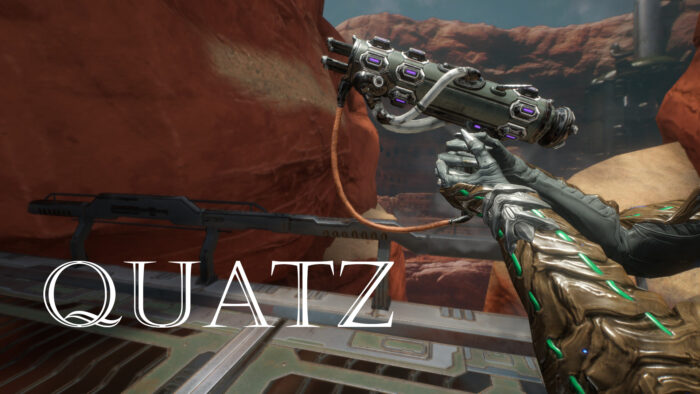 The Quatz is a very unique weapon, simply because of the fact that you don’t have to switch between the two different fire modes by using your alternative fire button.

Instead you either use hip-fire for the very fast automatic mode with a high status chance or you start aiming and get a four-round-burst shot with a very good critical chance.

You are free to switch between those modes as you please, but generally speaking it is often beneficial to try and find the best possible build for each fire mode.

Getting your hands on the Quatz shouldn’t be a problem at all, because you can simply buy the blueprint from the market for a small price of 40.000 credits.

Once you’ve crafted the weapon you will however need to put in a lot of Forma to get enough room for all the mods needed and wanted in your builds – between four and six Forma are needed before you are able to reach the builds you’re going to use in mid- and endgame content.

So start stacking your Forma, because it will be worth it.

As always you do want to try and build around the strength of a weapon or a specific fire mode and abuse the best ways to increase your damage.

So while building your Quatz you really want to try and add Magnum Force, simply because the penalty isn’t really noticeable due to the high accuracy, while the added damage makes this weapon kill higher level enemies without any trouble.

Hornet Strike, Lethal Torrent and Barrel Diffusion are auto-includes in almost every secondary weapon, which leaves you with four slots to fill.

It is also important to mention that the innate Electricity damage is pretty nice for your status damage procs, but there is also a reload animation, which will produce a shock wave, dealing Electricity damage to all enemies in range and briefly stunning them.

This reload animation will only trigger if you are reloading the Quatz from an empty magazine, so make sure to use all bullets if possible.

As soon as you start aiming with the Quatz you will enter the burst mode. In this mode you need to manually shoot each bullet/burst shot (which contains a four-bullet-burst), so it might be slower to kill a group of enemies with this mode and sometimes you rather want to use the auto-trigger mode by using hip fire.

But the burst mode does give you a lot of ‘control’ over your ammo reserves, deals a huge amount of damage to single targets and does allow you to even combat high level enemies or assassination targets.

Bringing one of each seems like a good solution, but you could totally change it as needed and preferred.

There isn’t a lot of room to experiment around with different mods here, but if you really want to change something you can probably do it without the Electricity damage mod due to the fact that the Quatz already has innate Electricity damage.

The best mod to replace Jolt is Primed Quickdraw, simply because having a faster reload speed will help you out a lot.

You could also take a look at the Acolyte mods like Hydraulic Crosshairs, because you are already aiming and will get the benefits of those mods all the time.

The auto-fire mode features a way better status chance than the burst mode, but it isn’t really worth it to build around critical chance and damage if you’re planing on using it more often than the burst version.

So instead of adding the critical damage mods, you really want to pick at least two +60% status chance mods (you don’t have to use Frostbite and Pistol Pestilence and bring whatever combination you like most) together with the great Primed Heated Charge to increase your damage output.

You could change this build up a bit by removing one or two +60% status chance mods and instead using Augur Pact to increase the flat damage output further.

Even something like Primed Magazine Slip isn’t super bad and can be useful if you are expecting to fight a lot of larger groups.

Don’t forget that you can always switch from hip fire to aimed fire if you start with the hip fire and keep the fire button pressed.

That way you should be able to reduce the ammo waste a bit and get some good damage in.

Honestly, the Quatz doesn’t look all that great on paper. You do need a lot of Forma, you do need to get some rare mods and you also need to learn how to easily switch between the two different fire modes.

But once you’ve got all these going the Quatz will deliver a huge amount of damage and while it can’t compete with the current meta choices (Kitguns!) or the almighty Akstiletto Prime, it is still a valid and good choice for the secondary weapon slot.

Make sure to try out the different builds and experiment a bit with your own ideas.

If you think you’ve found another or even better build, feel free to leave us a comment and share your ideas with the community!