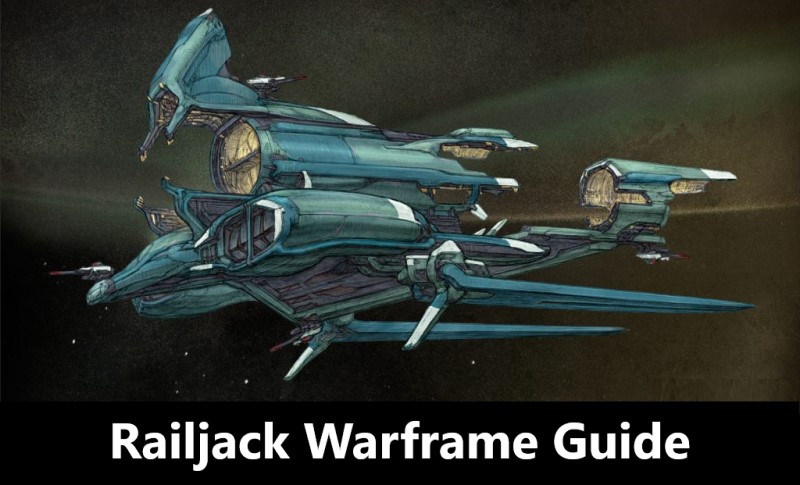 First of all, what is a Railjack in Warframe? It’s a big Orokin-era interceptor spacecraft the Tenno uses. They are large in size and feature various defensive systems and weapons that let them face even big capital ships in direct, head-on combat.

In addition they have a Void engine propulsion system so they can travel independently rather than on the Solar Rail netword. The navigator and executive officer of Railjack is Cephalon Cy.

Although just one Tenno can control a Railjack, it’s better to have four Tenno or a full Squad for optimal performance.

Each of the Tenno or Squad can manage a different ship area, such as the battle stations, helm, repairs, security against intruders, and putting out any fires on the ship.

A player can take on any role as necessary to keep the Railjack fully optimized.

It isn’t possible for a Railjack to dock with an enemy vessed, but they do have Archwing Slingshot. This means Tenno can be shot at enemy ships, so they can breach the hull and get onboard.

Another option is that Tenno can use their Archwings to get into space and fight individually, and explore other areas in space.

Build a Railjack in the Rising Tide quest. This means you have to complete The Second Dream. A Clan Dojo’s Dry Dock is where Railjacks are researched, managed and customized. Players can only view their own Railjack.

The name Railjack is probably because these can perform long-distance interplanetary travel without the Solar Rail having to be used.

You will need one of these to start the Rising Tide quest and to build a Railjack and customize it. The Dry Dock needs much more physical space than other rooms.

A Railjack is constructed during the Rising Tide quest, which requires completion of The Second Dream.

Railjacks are managed, researched, and customized in a Clan Dojo’s Dry Dock, and each player will only be able to see their own Railjack.

If you have existing rooms below or above the level, you might be blocking construction. This huge hangar needs sufficient space.

You will need several floors along with three elevators to match them. You will need four elevators if you want something under or over the dry dock.

Elevators aren’t required in order to build the Railjack.

How to Build a Railjack (Build Requirements)

Railjacks are personal builds. You only need clan participation for the Dry Dock and early Cephalon Cy research. This means that Clan multipliers don’t apply.

Items you need for Railjack component repairs can be added in stages, unlike when crafting things in the Foundry.

Every section repair needs six hours to finish in the Dry Dock. You can’t use platinum to speed the process up. For this reason you need a minimum of 36 hours to complete the Railjack build.

Once completed, you will see the Railjack floating over the Orbiter. There is a big transport tube connecting the two.

You can board your Railjack from the bottom deck of the Orbiter, found between the three rooms in the middle.

To build the Railjack, you need specific resources to construct each of these parts:

To construct fuselage part for Railjack you need:

Another Railjack part is Port Nacelle – here are build requirements:

Last part that you need to build Railjack is Engine Cowling – here are build requirements:

You can board the Railjack as soon as it is built, but unless you have the Reliquary Drive, you won’t be able to take flight.

Cephalon Cy will inspect the drive and then direct the Tenno to look on Lua for a Void Key.

This is a basic snatch-n-grab to find and extract the key. Avoid Sentient and Corrupted enemies on the way.

The Tenno inserts the Void Key into the Reliquary Drive to make the Railjack operational. You can now use the Railjack’s navigation console to undertake Empyrean missions.

You will be rewarded with a standard Sigma Series Railjack for the Rising Tide Quest. However there are different Railjack Series created in the Old War by three houses:

This house specialized in shields and engines, and was focused on the delivery of great technology which didn’t cost too many resources.

Although their components were important in the Orokin fleet, they didn’t have the customization needed by elite units.

These were material specialists offer a competitive balance of cost and performance. Their armor components and hull will withstand extreme elements.

This makes specialized units loyal to the house.

These components were believe the best there was. They do need an incredibly large amount of energy and resources though.

This meant only the most important parts of the fleet were outfitted with this house’s technology.

More info: Each house made its own Avionics, Armaments and Components, so there are various items in different versions which have their own benefits, costs and stats.

You have to repair salvaged wreckage Armaments and Components in the Dry Dock before you can use them.

Scrap any unwanted items manually. They will convert into Dirac. Already-repaired scrapped wreckage return 80% of the resources the repair used.

Bear in mind the inventory limit is 30 for Wreckage Components as well as Armaments.

If you collect over 30, you won’t be able to join or host any Empyrean missions until you manually scrap them for Endo. There is no way to increase this wreckage inventory limit.

Build Components and also Armaments have a base capacity of 8 in their separate inventories.

You can buy two more 2 Armament and Component slots when the inventory is full. This costs 12 Platinum.

There are no inventory limits on Salvaged House Avionics. You can also scrap Avionics into Dirac.