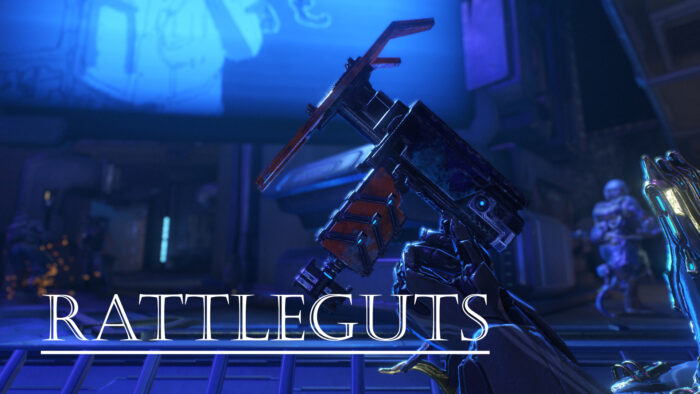 If you’re looking for a more classic version of the Kitgun you should definitely pick the Rattleguts as your chamber.

Besides the innate Radiation damage the Rattleguts features innate PIS-damage, with the Impact damage highly depending on whatever grip you use.

When building your Kitgun don’t forget that you can always experiment a bit and try to find your own build.

We do however recommend our builds mentioned below, simply because they are the best version in terms of damage output.

But everyone has their own play style, so just use our builds as a basis and play whatever you like most.

The Rattleguts is probably the only Kitgun chamber that can easily be combined with all four grips and still get a decent damage output without any impactful negative aspects.

Picking the Gibber will give you less damage and zero Impact procs, but the faster fire rate makes up for that. Or you could go to the other extreme and pick the Haymaker, which will give you a lot of damage, but decreases the fire rate by a lot. If you rather have a middle ground, we recommend using the Lovetap as your grip.

We went with the Haymaker version, but in the end we tried out all three versions and liked all of them.

No matter what grip you prefer, we really recommend picking the Splat loader and going for a hybrid build with a focus on critical chance and damage.

You could even play the Haymaker version and pick Anemic Agility to counteract the lower fire rate.

The biggest advantage going with the Haymaker and the Splat in combination with the Rattleguts chamber is the fact that you get to reap the highest benefits from using Primed Pistol Gambit and Primed Target Cracker (or the normal versions).

Magnum Force doesn’t really have any negative effects on the weapon and getting more fire rate and multishot with Barrel Diffusion and Lethal Torrent feels like a good improvement.

You also want to add two +60% status chance mods, even though 54% doesn’t seem like a lot. But since you’ll get to shoot nearly six bullets per second you do get enough status chance procs for it to still be useful.

You don’t necessarily have to pick Corrosive damage here, but rather bring whatever is needed for your next mission.

You also could think about bringing Hydraulic Crosshairs instead of Barrel Diffusion or Lethal Torrent to increase your critical chance even further.

The Rattleguts is a great Kitgun, but it also feels like the most ‘boring’ version you can build.

Especially if you already have a larger collection of secondary weapons you probably rather play with another hitscan weapon instead – even though the Rattleguts has the big advantage of allowing you to play with Pax Seeker as a Arcane.

But in the end it is still worth building the weapon and experimenting with the different version.

If you think we missed some important information or if you simply want to share your own build, make sure to leave us a comment!