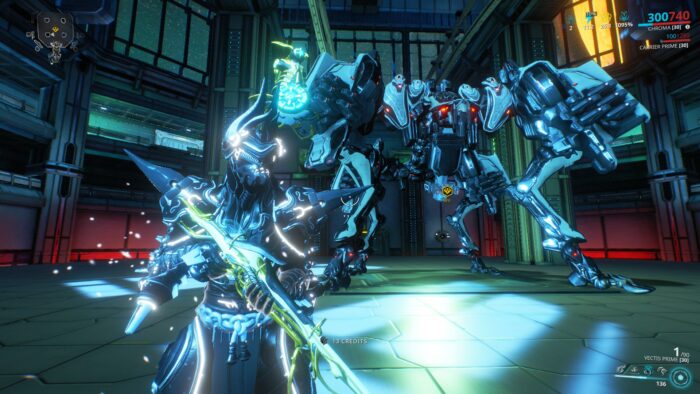 Fighting the Razorback Armada is a recurring event and every few month you are able to fight the boss again.

This will not only reward you with some nice credits and an Orokin Catalyst, but you also do have another chance to get some rare mods as well as all the parts needed to craft the Gorgon Wraith weapon.

So while you usually only have to fight the Razorback three times to get the event rewards it can be very beneficial to fight it way more often to get all the rewards you want and need.

While the Gorgon Wraith isn’t a very strong weapon and mostly used as MR fodder to increase your Mastery Rank a bit, you really want to get all the rare mods dropped by the Razorback (maybe with the exception of the Archwing mods).

So unless you already have all the rare mods you want and need, go ahead and repeat the mission.

Usually the event gives you around five days to participate in, so try and use that time wisely.

How To Get Razorback Cipher

Before you are able to join the mission you need to craft yourself a very important item, called ‘Razorback Cipher‘.

Without having at least one of these in your gear wheel you won’t be able to attempt the boss fight, so you need to start with crafting one of these.

You do get the blueprint via inbox message the moment the event starts, so check your inbox for that.

Crafting the blueprint is a little bit more tricky, because you need a few things.

While getting the Polymer Bundles shouldn’t be a problem at all, getting all the Gallium needed can be a little bit more problematic, especially for players that are in the earlier stages of the game.

The best way to farm Gallium is by killing Lech Kril on War (Mars) multiple times and get some good drops there or by doing some endless mission farming with a Nekros or a Pilfering Hydroid.

If you are looking for some tips on how to farm resources, our resource farming guide might give you some ideas!

The Cryptographic Alu is a very specific resource that only drops during the Razorback Armada event and can only be obtained by doing Archwing missions with Corpus enemies.

These are only found on Jupiter and Neptune, so the best mission to farm this resource is Salacia, Neptune. During the event it should be a little bit easier to find a full group and each run will usually reward around ten of the needed resource.

Now you only need to craft the Razorback Cipher in your foundry and equip it in your gear section of the arsenal.

The fight itself isn’t super hard or problematic at all. You just need to understand the few mechanics and you are good to go.

Also, once you’ve started the mission, just ignore all enemies and run straight to the mission marker. Once you’re at the terminal you don’t really need to hack the console.

Instead just click on ‘Use Razorback Cipher’ on the bottom of your screen and you’ll open the door to the boss without any further problems.

Once all team mates are at the boss, a short (and skippable) cut scene will start and you now need to fight he boss.

Here are the main steps:

As you can see, the fight is pretty easy. Usually you can just ignore everything around you and just focus on hacking consoles and the Bursas as well as damaging the boss.

If the fight goes on for longer than usual you might need to kill the small mobs as well, but in general you don’t need to bother with them.

After you killed the boss just head to the extraction point and wait for your team. You do get one random reward from the drop table after your extraction, so make sure to take a look at the reward you’ve got, but first take a look at the best Warframes for this fight.

Killing the Razorback isn’t really a heavy Warframe ability fight, which means that most of the Warframes are pretty useless when it comes down to their skill sets.

Instead you want a good weapon and as much survivability as you can get, because the different attacks from the Razorback and the mobs spawning during the fight hurt quite a bit.

Here are the best Warframes that you can bring to the fight:

Of course it is also possible to do this fight with other Warframes, but there is usually no upside to bring anything else.

That said, there is also no downside, so play with whatever you feel comfortable.

During the Razorback Armada fight you want to be as fast as possible – not only to save time, but also to mitigate potential damage coming from your enemies.

So killing Bursas and dealing a lot of damage to the Razorback is your top priority.

You really want to bring a high DPS weapon, so these are probably your best choices:

To be honest, there isn’t really a bad weapon here. You might want to avoid area-of-effect weapons like the Ignis Wraith or the Amprex and Grenade Launcher are also not a great choice, but almost every weapon from the weapon types above are a good pick.

Make sure to mod them for radiation damage to get a little bit more damage output against the Razorback.

As mentioned before, there are some nice rewards for defeating the Razorback and fighting it over and over again can be very beneficial, especially if you don’t have all the rare mods yet.

Here are all rewards you can get:

The Razor Armada event is only available every few month, so use the time while it is active. Some of the rewards are very nice and getting the Gorgon Wraith weapon just for the Mastery Rank experience is also fine.

The fight itself isn’t hard at all, so even newer players should be able to easily rush trough the mission multiple times.

Just make sure you have enough resources to craft the Razorback Cipher.

If you think we missed some useful ideas, feel free to share them with our community and leave us a comment!