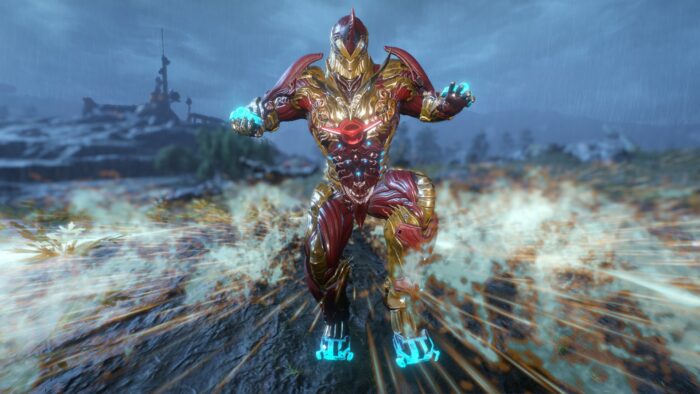 One of the most iconic Marvel characters in the last decade is Iron Man, the ‘genius, billionaire, playboy and philanthropist’ (yes, he said that) who is also part of The Avangers and made it to three franchise movies. If you do like to dress up ingame as Iron Man yourself, you won’t be using Tony Stark, but rather the almighty Rhino, who already is predestined to become the comic hero with his ‘Iron Skin’ ability.

While he is a little bit more bulky then the normal Iron Man version in the comics and movies, he brings a satisfying look to the game as long as you use the right color combinations and the some attachments. You could also try and use this look on other Warframes as well and maybe find a version that is even closer to the original Iron Man.

We base our Iron Man version on the Rhion Palatine Skin combined with the Palatine Helmet. Yes, the helmet doesn’t fully match the real Iron Man, but for our taste it is close enough. The Noble Animation is a great way to get the heroic stance you really want for this cosplay and we are also using the ‘Avia Solstice Chest Plate’ to try an resemble the arc reactor that Iron Man/Tony Stark is using. Then we combine the Hulta Arm Guards with the Hulta Arm Legs and top it of with the Shocking Step Ephemera for the final touch.

Color-wise we use DARK RED (classic palette, first row, first color) for all our attachments to round up the coloring of our main skin. Bringing a compatible weapon is somewhat rough, because Iron Man usually doesn’t use weapons that aren’t integrated into the suit. You could either use the Opticore (use a light blue color for the energy and just copy the colors of your main skin) to resemble the Energy Blast from Iron Man or equip the Prisma Obex for another ‘energy glow’ eye-catcher on your Warframe.

For the Rhino Warframe we do use these colors: