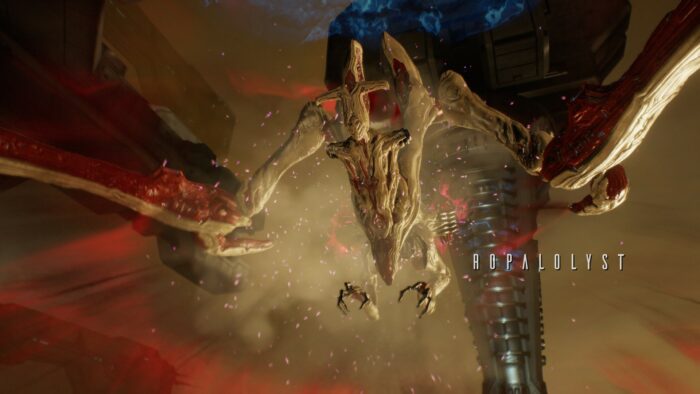 Also known as the ‘flying Eidolon‘ or simply ‘Flydolon’, the Ropalolyst is the first Sentient boss that is able to fly.

Even though it belongs to the same group of enemies that also includes the Eidolon enemies from the Plains of Eidolon, the bird-like creature isn’t found in the open world part on Earth.

Instead he got his own assassination node on Jupiter, simply called ‘The Ropalolyst‘.

Fighting and killing The Ropalolyst isn’t as hard as fighting it’s counterparts on the Plains of Eidolon, but you need to understand all the mechanics to be as fast as possible.

A good coordinated group can kill the boss in five to seven minutes, while this includes running the long way through the map (and getting a first taste of all the new parkour parts of the new Gas City tile set).

To be able to fight the boss you need to have finished the Chimera Prologue, which can be started once you’ve finished The Sacrifice quest line.

Once you’ve managed to run the really long way through the map (and mostly ignored all enemies), you and your team need to land on an elevator, which will take you to the actual boss fight once you’ve activated it.

You will see a short and unskippable cut scene, which does introduce the Ropalolyst, and then the first phase begins.

Once the start begins you need to quickly switch into Operator mode and start destroying the Eidolon armor with your Void Beam.

But don’t worry, in contrast to the Eidolon hunting on Plains of Eidolon, the Ropalolyst doesn’t require you to have the best possible Amp in the game.

The shields are easily destroyed, even if you bring the standard Mote Amp.

After you’re done with that the bird-like boss will fly towards one of the three capacitor towers to recharge itself. So you (and your team mates) need to leave the main platform and head over to that tower as well.

Make sure you dodge the electric streams emitted on the cables while you run towards that tower.

Once you’re there you need to wait until the Ropalolyst uses his laser beam, which targets a random member of the team. Bring the tower between yourself and the boss.

The laser beam will now supercharge the tower, which will change the color from blue to purple. When the Ropalolyst stops his laser attack you need to quickly approach and jump onto him.

As soon as you are close enough you can press your ‘X’ key and grab the Eidolon boss.

After a few seconds (and hitting the Flydolon on the head) you can start steering it into the supercharged tower.

After the boss got electrocuted by the supercharged tower it will automatically land on the main platform again (with you and your team mates being there as well) and spawn a few Amalgams, the newest addition to the pool of enemies in Warframe.

You probably want to ignore the boss until you killed all Amalgams first, because they deal a lot of damage and can also drop some of the new resource ‘Hexenon’, which is needed to craft Wisp and the new weapons.

But you can also choose to ignore the spawned enemies and kill the boss as soon as possible.

Once you’ve dealt with the Amalgams you can focus on the boss and start shooting the weak spot on his legs.

You’ll find two ‘Ropalolyst Synovia’ there, which can be destroyed. Kill one of those, which will result in the boss to be stunned for a few seconds.

If you’re not fast enough the Ropalolyst Synovia you killed before will fully heal and you need to destroy it again.

Now you basically need to repeat the first two phases again. The boss is going to fly to one of the remaining two towers.

Overcharge the tower, jump onto the flying Eidolon after you destroyed the armor with your amp, ram it into the supercharged tower and kill the second Ropalolyst Synovia on his back before activating the Terren Charger again.

You can choose to kill or ignore the Amalgams in this phase, but you usually want to get the loot here.

After you successfully hit the boss a second time with the giant laser he is going to fly to the last tower.

Repeat everything again, but be warned: If he is grounded again on the main platform (after you steered him into the supercharged tower) he will spawn Conculysts and Battalysts instead of the Amalgam enemies.

You know these enemies from Lua and they are not only very strong, but can also drop some nice mods and an Intact Sentient Core.

So you really want to kill them before you finally destroy the boss.

To kill the Ropalolyst for good you need to simply shoot him down to zero health and then use the few seconds to again activate the giant laser.

You only have a second or two to do that, so be fast or he will fully regenerate again. After you killed him you need to jump down to the extraction point, which can be a little bit tricky.

Use your Slam Attack (activate a melee attack while in the air) and aim for the platforms to circumvent the otherwise hard jumping part.

The main reason while most people are going to fight the flying bird-like Eidolon is that it does drop all blueprints for the Wisp Warframe.

But you also get some of the new mods that came with Update 25, so fighting him over and over again (even if you already have every Wisp blueprint) is not a bad idea.

Here are the boss drops (Amalgams, Conculysts and Battalysts not included):

The Best Warframes to Fight the Ropalolyst

Fighting the Ropalolyst isn’t really complicated and it is also not a Warframe depending fight.

While you want and need to bring certain Warframes while fighting the Eidolons on the Plains of Eidolon, beating this Sentient is mainly about doing the game mechanics and bringing a good weapon.

If you still want to bring the best Warframe possible, here are some ideas you might want to think about:

Bringing Rhino, Gara or Saryn (or any other tanky Warframe) will increase your survivability by a bit, especially during the fights against the Amalgams on the main platform.

Make sure that you’re not falling down from the cables while you’re running to the towers or your abilities will get reset and you are defenseless when the fight on the main platform starts.

Especially Oberon and Wisp could be good here if you really want to bring a support Warframe. Make sure to get the best healing out of your Warframe to smoothen out the fight a bit.

The way from the start of the map to the actual boss fight is pretty long and bringing a Volt for the speed buff isn’t the worst idea. Just make sure to be at least a little bit tanky or the boss fight might be harder for you.

You could also think about bringing DPS Warframes, e.g. a Mesa. But usually you can kill all the spawned mobs with your weapons and you would rather be tanky.

As usual, bringing a Chroma to an Eidolon fight isn’t a bad idea as long as you can survive the incoming boss damage.

The Best Weapons For the Ropalolyst Fight

Honestly, you can bring whatever you want as long as you can deal with the Amalgams, Battalysts and Conculysts.

Shotguns are probably a little bit problematic, because you can’t reliably hit the Ropalolyst Synovia spots during the boss fight, but especially Rifles or Sniper weapons are very good here.

You could also just do the whole boss fight with your Catchmoon Kitgun and don’t even think about bringing a primary weapon.

As long as you feel comfortable enough with your damage output you can easily play whatever weapon you like most in this fight.

Once you’ve learned all the different mechanics you can do it pretty fast. You can also solo this boss without any trouble, so you don’t even need to search or hope for a good group of team mates. It is really an enjoyable fight.

If you think we missed some important information or if you simply want to share your own ideas, feel free to leave us a comment here!