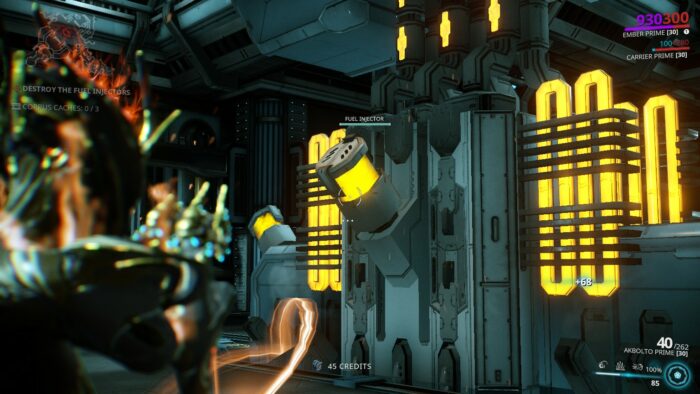 Generally speaking, Sabotage missions are very simple: All you have to do is reach he mission objective, destroy it and then head to the extraction point.

While this sounds super easy (and the early missions are exactly that!), you should know that there is a wide variety of different Sabotage missions and objectives.

Digital Extreme features a relatively lax definition of Sabotage missions, which is why you can comprise up to nine different submission types into the “Sabotage” term.

Especially for new players this can quickly become super confusing, because the first Sabotage mission you’re doing on Earth isn’t what you are usually going to encounter.

You should also know that some Sabotage missions are from special events or aren’t even displayed under the “Sabotage” mission name.

But while this might seem very unintuitive, most Sabotage missions are pretty straight forward and won’t give you a hard time.

Since they are also endless you are always able to get a good estimation of the enemy strength and level, so don’t worry too much and pick an appropriate Warframe or simply a few good weapons.

Usually all you have to do is find a reactor room and destroy the reactor’s core, but first you need to expose the latter.

To do that you need to activate a console, find and use power supplies and at the end destroy the reactor cylinders.

That does sound pretty easy and it usually is, but we still give you a summary of the different Sabotage mission types:

This one will be the first Sabotage mission you do encounter on Earth and while it will introduce you to that specific mission type, you don’t find it anywhere else but on Earth.

Follow the instructions and if you do have an Antitoxin equipped in a gear slot, use it to get even better rewards at the end of the mission!

After creating the Toxin, take it to the Toxin Injector and defend it until the timer finished.

The toxin will get destroyed in the process and you can head to the exit and extract.

As mentioned above, in this mission type you either have to find and activate a console or find two coolant stations first and extract those before you are able to activate the console.

You usually have the choice to either insert a fuel cell (usually lying in front of the reactor) or use one of the coolant cells you extracted before. If you use the fuel cell there is a high chance that a “blast door gets shut” and you need to find a special console to open it before you are able to extract.

Using the coolant cell instead will trigger an event where you need to defend four coolant pipes for a short amount of time, which will trigger ice patches all around the ship.

Another version can be activated by putting the fuel cell into one of the coolant stations, which will trigger a short defense mission and also requires you to sometimes open a shut blasting door before extracting.

Putting the fuel cell into the reactor is by far the fastest version and since the rewards are always the same you don’t really need to bother with the other two options.

This Sabotage mission type is super easy, because all you have to do is find up to four drilling machines on the map, quickly destroy them with your weapons and extract.

This mission is nowadays not that popular anymore, but used to be super important and part of the late game of Warframe.

You simply have to fight your way through the map until you find a Void Portal Room, activate one of the two consoles and defend it.

Then activate the second console, defend again until the counter reaches 100% and head through the Void Portal, fight a mini boss, bring back a cell and destroy the portal before you extract.

This mission type is simply named as “Hive”, but belongs to the Sabotage missions as well.

Here you need to fight your way through an Infested Ship and find Infested Hives, kill those and extract.

But before you are able to harm the Infested Hives, you need to find five Infested Tumors for each Hive, usually hidden somewhere near a Hive, destroy those and then get rid of the Hive.

Sometimes it feels kinda tricky to find the last Infested Tumor, but if you manage to go into the mission with some allies you should be able to find them pretty fast.

And if you sift through old forum posts you might hear some talk about the ‘old’ Deception mission, which used to be another form of Sabotage, but was discontinued in 2016.

To be fair, Sabotage missions are very easy and shouldn’t be a problem unless you come under-geared.

If you feel like you can’t beat the enemies due to their high level, keep on farming other missions first and get better weapons, upgrade your mods or simply put a Forma into a Warframe and level it back to 30.

If you still need some help to find some good Warframes, take a look at the following potential candidates:

Speed is king in Sabotage missions and using your weapons to dissolve every enemy in the mission is tiresome and slow.

If you do have a good Ember build you can just run through the mission, kill everything and even hack consoles while slaying your enemies.

Especially if you run the missions alone, playing with Ember feels super easy and nice, since you can put the mobs to death while simultaneously do whatever you need to do in the mission.

Going invisible and simply ignoring all enemies might not yield a lot of experience points, but will get the job done and is super fast!

You should get a good build and you can even get some stealth kills while running through the map.

Make sure to check your remaining duration or energy or else you might suddenly drop out of your invisibility while hacking a console, which might be a deadly mistake.

Other than that there isn’t much to do other than run around, do the mission target and extract.

Again, speed is usually the best way to face the Sabotage missions and Volt will increase your running speed by a lot.

This is super useful if you find yourself with some team mates, because you can speed them up and don’t need to worry all that much about killing harder enemies.

That way you can build a dedicated speed build for your Volt, speed everything up and get through the mission without any trouble.

Other Info: These Warframes are the best choice in regards to speed and finishing the mission as fast as possible.

That said, there is no ‘bad choice’ for Sabotage missions and you can bring whatever you like.

If you rather play a support Warframe, make sure to equip a good weapon or at least find some team mates that will carry you!

As mentioned above you don’t really need to kill enemies most of the time if you are running a Sabotage mission.

In most mission types you can simply ignore them, focus on the mission targets and just run past mob groups.

That said, quickly killing larger enemy groups will not only give you some nice affinity, but will also allow you to hack consoles without eating up a lot of damage.

Here are the top 3 weapons you might want to bring into Sabotage missions:

The huge area-of-effect damage of the Arca Plasmor will quickly slay groups of enemies and allow you to shoot while running past them.

Just make sure to time your reloads so you won’t have any trouble if you finally meet enemies you need to kill!

Six shots are usually more than enough to kill a mob (group) and the Justice proc will not only keep you healthy, but allow you to deal a good amount of area-of-effect damage.

You don’t even need a super strong build for the Vaykor Hek, which makes it one of the best weapons to pick!

If you are able to get the primed variant of the Soma, build it and use it! If not, going with the normal version is also viable until you can upgrade it into the Soma Prime.

If you put some elemental mods and some faster fire rate on it you can kill everyone and everything without any trouble.

Just be sure to watch your magazine reserves and not shoot every bullet before you’re done with the mission!

There are a lot of other viable weapons to be used in Warframe and Sabotage missions.

If you find yourself enjoying a certain weapon, just go ahead and use it. You don’t need to switch to anything else unless you’re having trouble solving a mission.

In that case, check for better mods or get yourself a weapon upgrade!