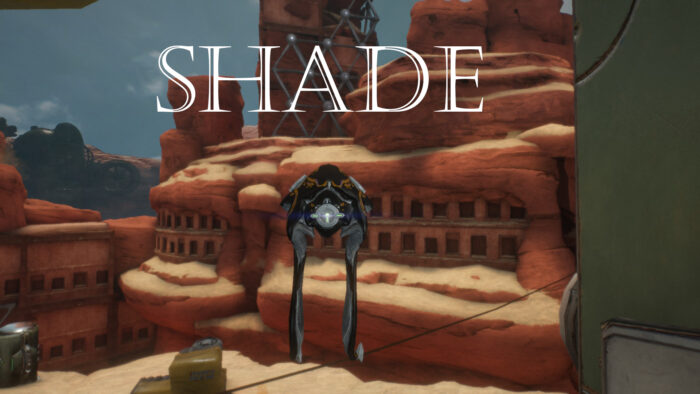 The Shade is the only sentinel in the game that does have a Prisma version of itself.

While the Prisma Shade does feature higher armor (75 instead of 50), better shields (100 instead of 50) and an extra Naramon polarity, it doesn’t matter all that much if you decide to bring the normal version instead.

As every Prisma item in the game you will be able to get yourself a Prisma Shade by buying it of Baro Ki’Teer if he does have it in his inventory – so getting the Prisma version won’t be easy at all.

Instead, going with the normal version will be often times the easier choice. Either way, you probably don’t want to combine it with it’s own sentinel weapon, the Burst Laser.

Shade does shine with his unique mods and mainly the ability to cloak it’s owner, rendering a Warframe completely invisible for enemy units.

This can be super strong, especially during the earlier stages of the game where damage mitigation is problematic and stealth often times is a great way to solve different missions.

Later on Shade does fall off in terms of usability, simply because the sentinel isn’t as useful as its counter parts – bringing Helios or the Carrier sentinel into a mission will usually give you better benefits.

That said, there is nothing wrong with trying out and playing the Shade throughout the game.

How To Get Shade

As mentioned before, getting the Prisma Shade really relies on Baro Ki’Teer bringing it in one of his visits every two weeks.

Getting the normal Shade is way easier, because you can simply buy the blueprint from the market for a price of 100.000 credits.

While that sounds expensive for early game players, getting yourself some sentinels will be very beneficial. Once you’ve got the blueprint, you need the following resources to craft it:

As you can see, the requirements to craft the Shade are not high at all, but you need to be able to get into some of the later planets (especially to get yourself a Control Module).

That said, you should have all those resources if you naturally progress through the star chart and eventually solve missions on the planets mentioned above.

How To Get Shade’s Unique Mods

As every sentinel, Shade too is able to use the Assault Mode mod, which will enable it to simply attack enemies with the equipped sentinel weapon as long as those targets are in the 30 meters range.

While sentinels usually also have their own, unique attack mod, those mods are usually way worse than the current standard one we get with Assault Mode, which can be used by every sentinel.

This might not be true for Shade. Here is where you get all the unique mods:

The standard attack mod of Shade does have a way lower range than the standard mod, but it does have the ability to not shoot until the owner of the sentinel gets attacked – which is great if you do want to stay invisible.

You can simply get the mod by killing some elite enemies (Corpus and Grineer) or by finding the Treasure Rooms on Orokin Void nodes.

This mod is the reason why you might consider using Revenge over Assault Mode.

It will render you invisible if enemies come to close and this invisibility will not be broken unless you start attacking.

Ghost can also be found in the Orokin Void Treasure Rooms or as a drop from Volatile Runner and the Orphid Specter.

This Shade-only mod is another great reason why you do want to play Ghost in your build – and why you might want to play Shade at all.

Getting +120% weapon damage can be super strong and is a great way to increase your damage output against higher level enemies, assassination targets or against big mob groups.

Go invisible, break it and then kill everything in range. You can buy this mod from Cephalon Simaris for 75.000 standing points.

More info: As you can see, Shade is a sentinel that uses a lot of synergy regarding it’s mods. Playing Ghost will help you enable Ambush, while Revenge will make sure you’re not breaking the invisibility unless you really want to.

When looking at the defensive capabilities of the Shade, you will find a high health pool and a low amount of shields – so using Calculated Redirection isn’t worth it at all.

Instead you really want to bring in Enhanced Vitality and either Repair Kit or Metal Fiber (or even use all three of these).

Primed Regen (or the normal Regen mod) is a great way to increase the time you can use Shade in a mission and Primed Animal Instinct (or it’s normal version) is probably the best utility mod (together with Vacuum) for every sentinel in the game.

So these mods should always be the first ones to use if you start a new build. From there on out you have a few decisions to make.

This version of a mod build will use Revenge in combination with the other two sentinel mods (Ghost and Ambush) to give you the best damage output possible with Shade.

If you don’t want to use Ghost you should use Assault Mode over Revenge, but otherwise the attack mod will help you out a lot.

While Ghost has a very low range, you can trigger it by simply running into enemies and not attack at all, which will then result in an activation of the invisibility – which will not broken until you decide to attack again.

Sacrifice and Guardian are also a great choice and will give you a little bit more utility for your missions.

Especially Guardian is a mod that will assist you more than you will ever know.

This build is very close to the damage build, but doesn’t use an attack mod at all.

That way you will never break Ghost’s invisibility unless you really want to and you will not only get to dodge incoming attacks without any trouble, but you also get another mod slot for more survivability.

But to be honest unless you already have a good sentinel weapon to use with the Shade, you don’t really want to play the damage build.

Once you’ve managed to get enough mods to get a decent amount of damage output with your preferred sentinel weapon, there is really no upside to using this build anymore.

Shade is currently one of the weaker sentinels in the game. While the synergy of becoming invisible and then getting bonus damage for breaking that invisibility is great, it simply doesn’t bring enough utility to be good.

Other sentinels will outshine Shade pretty fast and if you want and need reliable invisibility you should rather pick a Warframe like Loki, Ivara, etc. to get that.

If you do however want to try out Shade for yourself, make sure to get the best possible build.

If you think we missed some information or if you found a better build – let us know. Leave a comment. Save the (Warframe) world!