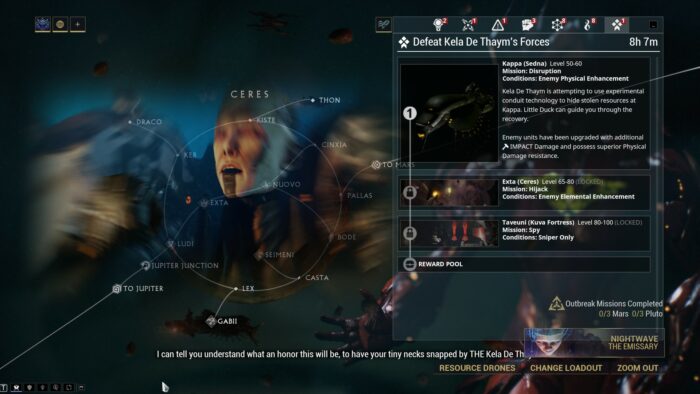 Sorties have been a part of Warframe for a long time and they are also usually the first more endgame oriented game mode most new players tend to try out.

There is a chance to get really early into Sorties since the requirement to join them is only to have a fully maxed level 30 Warframe.

You also need complete the ‘The War Within‘ quest, which can be started at Mastery Rank 5. So theoretically you will be able to do Sortie missions fairly early into the game.

In reality you won’t really be able to do those unless you’re playing with way more seasoned players: First of all you will need a couple different Warframes to be useful in the different mission types.

Secondly, Sorties can potentially be on every planet and every node – which means you need to have access to those nodes in order to start the Sortie mission.

Most players simply don’t have access to all the planet nodes needed that early into the game.

If you want to know more about Sorties, recommended equipment, rewards, and tips and tricks then keep on reading!

What Are Sorties in Warframe?

As mentioned above, Sorties are more directed towards endgame content.

Not only do you get a daily chance for a Riven mod drops (which are a big part for endgame builds and trading), but you meet a lot of high level enemies, starting at level 50+ and ranging up to level 100+.

So bringing good weapons and the right Warframes is fairly important, especially if you don’t have a group that is willing or able to carry you.

Each Sortie run consists of a series of three missions that differ in mission type and difficulty. You also need to solve the previous mission before you can move on with the next one. If you fail, you can simply repeat it until you’re done.

Another important addition to Sortie missions are the special conditions that randomly apply and can be seen before entering the mission.

These conditions are usually easy to understand and for example do give enemies higher armor or shields, require the player to equip only a certain weapon type (e.g. ‘Shotguns only’) or have the ability to proc different damage types against the player.

While those special conditions are usually easy to play around, you really need to make sure to look at them before you join the mission – or you might pick a caster Warframe like Saryn or Ember with the ‘low energy’ condition.

Even though the missions encountered during your Sortie run are basically the same that you already did during your playthough of the star system, you’re going to find some harder conditions on the way.

For example, you’re not able to use Ciphers to hack consoles, which is mostly relevant for Spy missions.

There are other special conditions for all other mission types as well:

All the other missions – Archwing, Infested Salvage and Capture – are currently not part of the Sortie cycle, which means they won’t be selected at all.

But you’re not going to run the daily Sortie mission (which resets with the daily reset timer every 24 hours) for some Credits.

Instead you’re going to do them for one of the rewards you’ll get after completing all three missions.

Here is what you can get:

As you can see, some of these rewards are very strong and needed throughout the whole game, while others appeal more to players in the early and mid game.

That said, doing the daily Sortie run is usually really fast (usually doesn’t take half an hour) and has the potential to give you really nice rewards.

The Best Warframes for Sorties

Usually we do mention the best Warframes for the job and talk about where the strength and weakness of each of our choices are.

But with Sorties it is a little bit different, simply because there are a lot of different mission types and conditions you might need to think about.

While Saryn might be a great DPS pick for Mobile Defense missions in general, you most likely don’t want to bring her on low-energy-conditions.

You also need to bring a build that is strong enough to fight high level enemies, so often times you want to make sure to bring an extra survivability mod like Vitality and/or Redirection.

People often pick Inaros simply for his high armor and health pool and combine him with their best weapon.

Support Warframes like Wisp, Oberon or Trinity are usually a very strong pick for newer players: If you don’t have the mods to complete a great DPS build on your Warframes, playing a support gives you the ability to be useful without having all the endgame builds.

It is also usually a great way to make sure you yourself are not dying all the time.

You might also want to think about utility Warframes like Nyx, Nova or even Vauban, but those usually need some better mods to work out in the higher level environment of Sorties.

Weapon-wise there isn’t much to recommend. Bring your best weapon.

If you do have something with crowd control (e.g. Blast damage) that’s great, but otherwise just use whatever you feel comfortable with.

Even though Sorties can look intimidating at first, they really aren’t.

Once you start to understand how to deal with a certain type of mission, you will be able to quickly rush through your daily try.

For example, bringing an Ivara into the Spy mission will make everything super easy and nearly impossible to fail. Bringing crowd control into Interception, Mobile Defense, Defection or similar missions is a great way to ease out everything.

And during ‘weapon type only’ missions you probably want to bring your best Warframe pick, especially if you don’t have a good weapon for the required weapon type.

Also make sure to understand which mission types require you to kill enemies and which don’t care about that.

If a mission doesn’t really need to you to kill a certain amount of mobs or an assassination target, usually you don’t even need to bother bringing damage into the mission.

Spy, Rescue or Sabotage are examples for that. You can also try to ‘cheat’ your way through certain special conditions by picking the right Warframe: Hildryn is great in the low-energy-mode, because she doesn’t use energy.

Mesa or Excalibur don’t care at all about the equipped weapon type and Inaros is great for Hijack, because you have a high health pool (and usually some armor equipped).

The Hijack objective will drain your health instead of shield (which you do have plenty of) and you’re not going to use your abilities, so the nullifier shield isn’t a problem.

Sorties are a great daily mission type that will accompany you throughout the whole game.

Farming for Orokin Reactors, Orokin Catalysts, Forma or Exilus Adapter feels great during the early stages of the game. Kuva, Endo and Riven Mods are what you want later on.

And if you ever get lucky enough to get the Legendary Core, you’ll save yourself a lot of Credits and Endo – or sell it for Platinum.

Even though Sorties can be quite hard to beat for beginners, getting your first real builds suited for those missions feels great and it is a goal you should work towards to.

If you do have more ideas and tricks to share (or if you simply want to tell us about a mistake we made), don’t hesitate and leave us a comment!