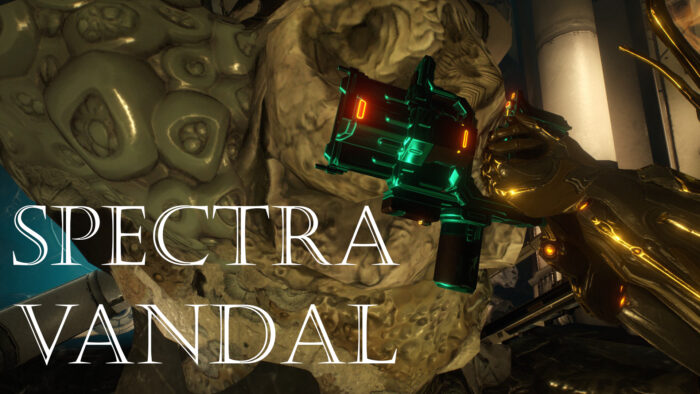 While the Spectra weapon has been a part of Warframe for a long time, its successor (the Cyanex) took a while to be implemented into the game.

At the same time Digital Extremes also introduced the Spectra Vandal, which features a higher base damage, a better critical chance and status chance as well as a faster reload speed and a larger magazine size.

So while the Spectra Vandal might not be one of the best secondary weapons out there, you can still build around all the good stats and get a decent damage output.

Especially the great combination of a high status chance and a very good critical chance makes this weapon a good choice against a lot of different enemies.

Together with the (short) innate Punch Through and the very fast reload speed you will be able to fight mob groups as well as higher level enemies.

Another great advantage: The Spectra Vandal can use the Sequence Burn mod!

As usual, you really want to build around the different strength’s of your weapon – which for the Spectra Vandal are the high status chance and the very good critical chance.

But there are also other ideas to be had and to be used, so make sure to find your own builds or use our ideas as a base to start from.

Especially building around the Sequence Burn mod during the earlier stages of the game feels super strong and will help you out quite a lot, while you don’t really want to and need to use it for your endgame builds.

But in the end it always comes down to your own preferences, so play whatever you like!

Also, because of the super high Riven disposition you might want to try and find yourself a Spectra Riven mod.

Status Chance, Multishot, Critical Chance or Critical Damage are by far the best stats to get, but even added elemental damage, more Puncture damage or something like that might be super strong and way better than the worst mod in your build.

So keep an eye out for that!

This is the strongest build you will find for this weapon that isn’t using a Riven mod.

Magnum Force is very strong on the Spectra Vandal due to the very high accuracy and you won’t really feel the disadvantage of it.

The weakest mod here is probably Lethal Torrent and if you find yourself having a great Riven mod or if you want to try out Sequence Burn, go ahead and switch it out for that.

Other than that, this mod build is pretty straight forward and shouldn’t need a lot of explaining.

Here we try to find a build that totally ignores the high status chance and instead works purely on the critical damage in combination with Maim to increase the Slash damage.

Magnum Force is again the MVP of this build and you really don’t feel the disadvantage of the lowered accuracy. If you want to change this build around a bit feel free to use Sequence Burn and/or Hydraulic Crosshairs over Lethal Torrent and Augur Pact.

You could even try and integrate Embedded Catalyzer and combine it with a Warframe that frequently uses an ability.

While this build is usually weaker than the first one, sometimes (and especially against the Infested units) you need a high amount of Slash damage.

In those situations you really want to bring this build over the hybrid version. Otherwise it is recommended to use the first build over this one.

Yes, the Spectra Vandal isn’t the greatest secondary weapon in the game. But that doesn’t mean that you can’t have fun and still get decent or even great results with it.

Especially if you manage to use the Sequence Burn mod during the early or mid game, you will deal a good amount of damage and get a very fine choice for a secondary weapon.

If you think you did find a way better build or if you think we missed some important information, feel free to leave us a comment!