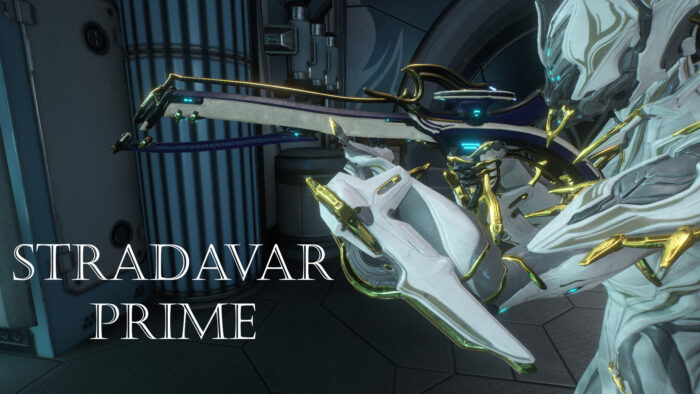 The Stradavar Prime is the newest addition to our arsenal and came with the Equinox Prime introduction to the game.

The weapon is a strict upgrade from it’s normal version and will be a great help fighting alongside your other weapons and your Warframes.

The rifle deals mainly puncture and impact damage and also surprises with a very unique and impact-full secondary fire mode.

The high magazine size and the great ammo capacity (540 rounds max) will help against enemy groups as well as high level (and high armor) mobs or even assassination targets.

Getting the weapon is as easy as getting any (currently not vaulted) primed weapons: You can simply farm relics and open them – and with some luck you’ll be using the Stradavar Prime soon.

Building the rifle shouldn’t be all that hard, but if you are looking for some pointers or starters, our guide will exactly give you those.

You can also always just copy-paste our builds and use them for your own good!

Every time you start a new rifle build, you do want to include at least Serration and Split Chamber. Those mods are the basic of every build and depending on your weapon you always want to use mods that will increase the best stats on your weapon.

When playing with the Stradavar Prime you do have the option to switch from the automatic mode to the single-shot mode simply by using your alternate mouse key (default: Mouse 3 on PC).

The single-shot mode will increase your damage output by quite a lot, but also be beware that every shot takes two bullets. So you might run out of rounds faster than you thought.

Tip: If you want to know more about the Stradavar Prime and its abilities, feel free to take a look at the wikia page.

This build tries to combine some additional critical damage with elemental mods and bring a good compromise against everything you might encounter.

Point Strike and Vital Sense both benefit from the increased base damage provided by Heavy Caliber and will give you the chance to deal high critical damage.

Shred is a nice addition if you do switch to secondary fire mode from time to time (or if you plan to use it as your main fire mode), but if you rather just auto-fire switch it out for Vile Acceleration.

This build also uses two elemental mods, which is super strong against a lot of different enemies.

So unless you try to find a special build you should always use elemental damage. Which modes you’re going to use should always depend on the enemies you plan to encounter, so chance your elemental mods accordingly and benefit from the different damage types.

Mods you might want to add are Critical Delay (in case you rather have more critical damage) or Fanged Fusillade if you do like your slash damage.

This build is what you do want to pick if you don’t need (or simply don’t want to use) the elemental mods.

Vile Acceleration is a great addition and you don’t really need the punch through Shred provides in the standard build.

Critical Delay will help with higher critical chance and therefor allow you to proc your crit more often. Fanged Fusillade is another great addition and will help with some procs as well.

Mods to think about are Argon Scope (to increase your critical chance a lot) and Bladed Rounds, which will help with even better damage output.

That said, you should only think about (and use) these mods if you are really interested in aiming a lot. Every time you stop aiming, the buff will vanish and you won’t benefit from these mods.

So if you do like to kill a group of enemies, run around and kill some more (and if you do love to use a lot of hip fire), these mods are a wasted slot.

It really depends on your own play style…

This build is a bit more on the casual side of things, but nonetheless still capable of killing large groups of enemies or even taking down assassination targets.

Speed Trigger, Vile Acceleration and Shred will increase your fire rate by a huge amount and you will feel like you’re shooting with a MG.

Point Strike and Vital Sense are in combination with Heavy Caliber once again a great source of damage output and will help you killing high tier enemies.

Again, you might want to think about Bladed Round or Argon Scope, depending on your play style you will increase not only your damage, but also your crit numbers. A

lways have an eye on your bottom right and reload if needed. You will go through your ammunition really fast, so bring some sort of ammo conversion.

Picking Carrier as your companion will be super beneficial and help with any ammo problems you might encounter.

The Stradavar Prime is a very strong rifle and can rival even the Soma Prime or Boltor Prime. Choose whatever build you like and don’t forget to always change your elemental mods as needed.

Also, don’t be afraid to try out our more casual-sided builds and just have fun playing Warframe.

Our builds are pretty straight forward, but if you have another idea, feel free to leave us a comment or directly send your build to us!